Tesla's Solar Roofs were first introduced in 2016 in an impressive campaign that saw Tesla CEO Elon Musk showcasing the advanced tiles on a home from the TV series Desperate Housewives. Musk then announced that orders were opened in May 2017.

Since then, however, not much noise has been made around the futuristic roof components. This comes as much of a surprise as the tiles come with many advantages.

Found in a range of attractive textures, Solar Roof tiles are customizable to the amount of electricity a roof produces and integrated with off-grid reliability. Furthermore, they come with a nearly infinite warranty.

Should mention that the Tesla solar roof is robust against any weather, incl heavy hail. Also, higher insulating value than a standard roof.

A security demonstration for first responders

Now, a new security video for first responders has inadvertently showcased more of the tiles' qualities. The video features an emergency response on a Tesla equipped solar rooftop.

In it, firefighters can be seen dismantling a roof featuring Tesla Solar Roof tiles in order to create ventilation and clear a path to walk through. The video is hosted by former Assistant Fire Chief for the Hopland Fire District Brock Archer. 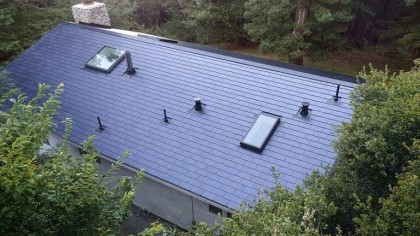 Archer's firm for training rescue professionals Advanced Extrication has done previous work on Tesla products. The solar rooftop video is supported by both Tesla and the California Department of Forestry and Fire Protection.

To safely dismantle the roof, the instructions feature information provided by Tesla as well as hands-on research. What the security demonstration reveals is that the electricity-wired construction is actually relatively easy to dismantle safely.

Because the system is not earth-grounded, first responders need to simply ensure they touch only one cut wire at a time to guarantee their safety. Archer adds that there is “almost zero risks of shock or electrocution" when cutting either the tiles or diode trunk harness.

In addition, the Tesla Solar Roof installation comes with a rapid shutdown device that can disconnect the roof circuit. The video also features recommendations for not slipping or sliding of the tiles.

The demo comes at a good time as Tesla has been reported to be increasing its solar-related product delivery. “No one should see us as stepping back from solar. In fact, it’s the opposite,” Tesla chief technology officer JB Straubel told USA TODAY last week.

“People have come flooding in and are waiting on the product. So now we’re aggressively ramping our capacity," Straubel added.

Tech from Nuclear Power Speeds-Up Coronavirus Detection, but Not Vice-Versa