Tesla filed two lawsuits yesterday accusing former employees of secret theft and information trading. It seems that Elon Musk’s automobile company just can’t catch a break. After the massive complaints and market anxiety about the belated production of the affordable Model 3, there is, again, something to make them sleep uneasy.

The Silicon-Valley automaker hopes to sue four former employees and Zoox, the self-driving startup. The former employees, who worked in warehouse and distribution control management are accused of stealing "proprietary information and trade secrets to help Zoox leapfrog past years of work needed to develop and run its own warehousing, logistics, and inventory control operations."

That is most likely a reference to Tesla’s self-designed software-platform called "WARP". The company’s lawyers state: "These materials and know how were developed by Tesla over many years, and at great expense."

"The theft here was blatant and intentional"

Two of the defendants are accused of sending emails with confidential material to themselves about the firm’s receiving and inventory procedures as well as "internal schematics and line drawings of the physical layouts of certain Tesla warehouses".

One of them, a former manager at one of Tesla’s distribution center, Scott Turner, typed the following words in the email for himself: "you sly dog you". All four defendants are now working for Zoox, which is not surprising if one considers Tesla’s recent seven percent layoff, in fact, there is more than a hundred people who continued at Zoox after their dismissal.

The way Tesla found out about the suspicious activities could even serve as a plot for a spy-comedy: one of the defendants accidentally sent an email with a modified version of a proprietary Tesla document which had a "freshly-emblazoned with the Zoox logo" on it, yet still consisting of attributes revealing its origin, thus Tesla claims in the suit: "without doubt, that the defendants are actively using the Tesla information they stole."

Tesla filed another lawsuit against Guangzhi Cao, who resigned from Mr. Musk’s company in January. Before that he was one of the very few people that had access to Tesla’s Autopilot software and its source code. 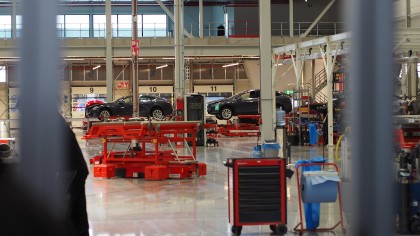 Right after he quit, Mr. Cao started working for the Chinese startup XPeng. This company just released a fully-electric SUV, which has been described as a Tesla-clone, build on Tesla’s open source technologies. (And, as it seems, maybe not only on the ones accessible openly.)

Tesla claims that Cao copied more than 300,000 files onto his private iCloud account. Moreover, Cao, while leaving the company, deleted 140,000 files from his work computer, then "repeatedly logged into Tesla’s secure networks", presumably to do some cleaning-up.

Tesla’s suit also says: "Absent immediate relief, Tesla believes Cao and his new employer, [XPeng], will continue to have unfettered access to Tesla’s marquee technology, the product of more than five years’ work and over hundreds of millions of dollars of investment, which they have no legal right to possess."

Yet, it remains unclear, how can an employee copy crucially important and top secret files onto a private cloud account, or even to a flash drive.   After prior leaks, Tesla made its employees to "renew their vows" last year, although it seems Mr. Musk and his company must strengthen the security protocols even further.