Tesla hid a secret message in the event invitation teaser for those who just cannot wait for the release of the new crossover SUV, Model Y

Tesla's PR department concealed a secret message in the invitation teaser for guests who will attend the launch of their new crossover SUV, the Model Y at LA Design Studios on Thursday. Elon Musk’s company has once again shown us that they, indeed, are the nerds we know and love.

Not surprising that many of those who got the teaser in their mailbox wanted to look behind the shadows, wouldn't you?

One of the curious recipients, YouTuber Marques Brownlee (MKBHD) played around with the image using the built-in picture editor tool of his iPhone. He wanted to recover some details brightening the picture or adjusting its shadows.

Watching the results brings a satisfactory smile in everyone’s face. People at Tesla know their target audience and were playful enough to hide a little message for the curious tech-geeks.

Yes, that’s all that can be discovered until the 14th of March launch, ‘NICE TRY’ - Nice touch, Tesla! 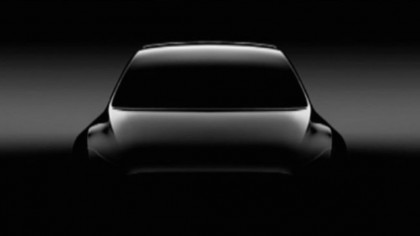 Elon Musk summed up the basics in a dry tweet, saying it is going to be about ten percent bigger than the sedan, thus will cost about ten percent more than the Model 3. The new crossover SUV will be using the Model 3’s battery, so we can anticipate a drop in its range, given that an SUV will weigh significantly more. The Model Y will not have the flagship sedan Model X’s 'falcon wings'.

A more interesting hint is that there is going to be no leather in the Model Y, as the billionaire entrepreneur CEO leaked: ‘The Model Y will not have any leather in it, even in the steering wheel … even if it does have a steering wheel.’

Well, most likely there is going to be a steering wheel in the Model Y, given the fact that if Tesla wanted to come up with such a feature (or a lack of such feature, thereof), they for sure would wait until a major facelift on the flagship Model X.

The abandoning of the leather can be seen as a very up to date gesture, since as we well know, 2019 is the year of the vegan(ism). Additionally, Mr. Musk’s partner, the space pop star Grimes is a famous advocate of the diet as well as animal rights.

Despite the lack of facts, one thing already seems to be sure. And that one might be the most important points shaping the car industry in the upcoming years.

That is the price of both Model 3 and Model Y. Both vehicles will be selling under $40,000 dollars which makes the utopia of bringing electric cars available for the broadest public a reality. It is not a luxurious allure any more to drive around in a cool new Tesla.