Today, Tesla unveiled the latest addition to their lineup of electric vehicles with the Tesla Model Y, an electric SUV Crossover built on a modified Model 3 frame.

SEE ALSO: TESLA IS ON A MISSION TO INVENT THE PERFECT BATTERY

The Model Y will come in four versions altogether. The first three, the Long Range (LR), the Dual Motor AWD (AWD), and the Performance (PERF) models, will be available in the Fall of 2020, with the Standard Range (SR) model becoming available in the Spring of 2021.

Some of the features highlighted during the event include the Panoramic Glass Roof and an option for seating 7 people in the vehicle, which prompted some cheers from the crowd.

Much of the event centered around Elon Musk’s reflecting on the progress that Tesla has made both in its own goals as a car company, but also in moving the industry toward moving to more electric cars. 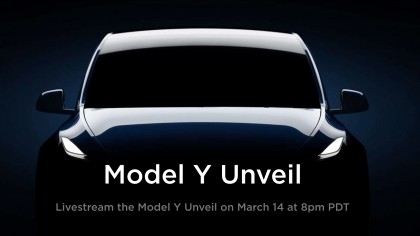 Joking at one point that “the Internet is forever,” Musk showed quotes on a the screen behind him of commentators at Forbes and the Daily Mail UK disparaging the idea of an electric vehicle, as recently as 2011, as a wasted effort. He followed these up with headlines from news outlets from 2018 declaring that major automakers around the world were going “all in” on electric vehicles as the future of transportation.

He revealed that last night, Tesla had prevented its 4 millionth metric ton of carbon emissions thanks to their electric vehicles and Musk said that it was his belief that Tesla will have produced 1 million cars by March of next year.

Musk has been under fire in recent months for his behavior, his picking fights with the SEC, and the production challenges that have faced Tesla, but taking a step back, it is hard even for the more cynical among us not to be genuinely impressed with what Musk and Tesla have achieved.