Tesla’s latest large Powerpack installation is now live in Terhills, Belgium. The system is comprised of 140 Powerpacks and a bunch of Tesla inverters for a total power output of 18.2 MW.

It will be used in a similar way to Tesla’s first big foray into grid services, the Tesla 100MW/129MWh Powerpack project in South Australia. The South Australian project has already demonstrated huge impacts on the cost of frequency control and ancillary services (FCAS).

The Belgium project was built as a collaboration between Tesla and demand response aggregator, Restore. It will be used to balance services to European transmission system operators.

The Tesla batteries are charged when there’s an excess of power and then discharge when there’s a need for more power. This helps balance the grid so that it doesn't have to rely on slow to respond gas generators and steam turbines.

The UK Vice President of Restore, Louis Burford, told The Energyst that they understand the combining of assets like batteries like a ‘synthetic pool’: “By creating synthetic pools or portfolios, you reduce the technical requirements on individual assets that otherwise would not be able to participate [in certain balancing services]. By doing so you create value where it does not ordinarily exist. That is only achievable through synthetic portfolios.”

Burford went on to say that Restore has a similar project planned for the UK. The Australian Energy Market Operator (AEMO) recently praised the first few months of the Tesla big battery in South Australia, saying it is faster and smarter than conventional turbines.

In a recent report, the grid operator illustrated how the battery was used in frequency control and ancillary services market. Graphs in the report show that the battery was able to provide a more accurate and faster response than conventional generators. 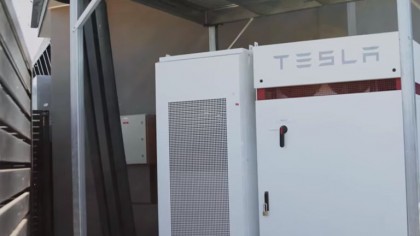 Of particular note is the graph that shows the battery response to a major outage of a fossil fuel generator in NSW on December 18. The graph shows that the response of the Tesla big battery was virtually immediate when the frequency deviates below 49.85Hz.

“Commissioning tests and simulations confirm that the HPR is capable of responding more rapidly to a contingency event than conventional synchronous generation,” AEMO notes in its report. Australia has commissioned additional Powerpack projects.

Australia continues to back Tesla

The Australian Renewable Energy Agency (ARENA) announced in March, that it will match a $25 million investment by the Victorian Government to jointly fund Victoria’s first two large-scale, grid-connected batteries as part of the Victorian energy storage initiative.

Tesla will supply Powerpacks for the 25 MW/50 MWh battery that will be integrated with the existing 60 MW Gannawarra Solar Farm in near Kerang, Victoria. The system will be owned by Edify Energy and its partner Wirsol. ARENA says the project “will demonstrate how an existing solar farm can be retrofitted with battery storage.”

Settling the Debate: Does Tesla's Autopilot Save Lives or Risk Them?