The MIT-led project has found a new planet three times as big as earth.

The new planet orbits a nearby dwarf star about 53 light years away, in the constellation Reticulum.

It looks to have the longest orbital period of the three planets identified so far by TESS. The three planets discovered by TESS in its first three months of operation each have unique characteristics and orbits.

The new planet, despite being pretty close to its star has a surface temperature of around 300 degrees Fahrenheit.

“It’s the coolest small planet that we know of around a star this bright,” says Diana Dragomir, a postdoc in MIT Kavli Institute for Astrophysics and Space Research, who led the new discovery.

“We know a lot about atmospheres of hot planets, but because it’s very hard to find small planets that orbit farther from their stars, and are therefore cooler, we haven’t been able to learn much about these smaller, cooler planets. But here we were lucky, and caught this one, and can now study it in more detail.”

The new planet is about three times the size of earth but 23 times as massive. It is unlikely the planet is rocky, and therefore potentially habitable. Rather it is probably composed of dense gas.

“We think this planet wouldn’t be as gaseous as Neptune or Uranus, which are mostly hydrogen and really puffy,” Dragomir says. “The planet likely has a density of water, or a thick atmosphere.”

TESS launched in April 2018 and has been constantly monitoring the sky sector by sector looking for ‘momentary dips' in the light of about 200,000 nearby stars. Dips in the light are likely to mean a planet is passing in front of that star.

Two-year mission is laborious and precise

The incredible satellite has four onboard camera which focuses on each sector for 27 days before moving to the next one. TESS will operate for two years and will manage to examine almost the entire sky in that time. 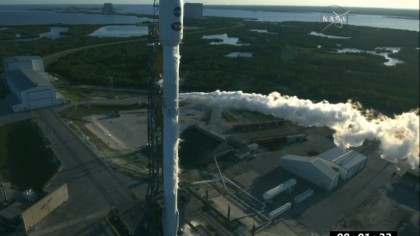 Finding planets isn’t as easy as sending up a satellite though, it also requires some detective work by researchers back on Earth. Dragomir explained that within the sector 1 data, a single transit or dip was identified in from the star HD 21749.

But as the satellite only examines each sector for 27 days any planets with orbits longer than this time are difficult to detect because as the plant comes back around the satellite may have already moved on to another sector.

To confirm HD 21749b was indeed planets Dragomir referred to another dataset, collected by the High Accuracy Radial velocity Planet Searcher, or HARPS, a high-precision spectrograph installed on a large ground-based telescope in Chile.

By comparing the two datasets and some clever workarounds to fill in the gaps of the data set. The research team was able to confirm that HD 21749b was indeed a planet.