Facing emerging threats to global food security in the future, scientists are transforming food as we know it to meet the challenge.

With so many areas of modern life undergoing change, thanks to technology, the one area that you would think as reliably boring would be the fruits sitting on your kitchen counter or the bread tucked away in a cupboard—but you'd be wrong.

The reality is that the food products we eat today are the result of farmers and producers making steady changes to our food for millennia through selective breeding and cultivation and scientists have only accelerated this process over the past few decades in universities and agricultural institutes around the globe.

As humanity fully steps into the 21st century, the future of food security has been of special interest to scientists and producers faced with the challenge of sustainability presented by climate change—and they have not been idle in coming up with new food production ideas and technology to meet it.

Since at least the Enlightenment, scientists and philosophers have tried to find a scientific basis for humanity's propensity for predicting an impending apocalypse and starting around 60 years ago, they seem to have found what they were looking for. 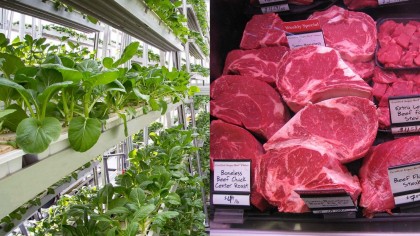 Advances in medical technology and the establishing of major public and private institutes for public health have saved and prolonged the lives of innumerable people. This has also happened at a time when mass global conflict has been at historically low numbers.

As a result, the human population has experienced much more rapid growth then we've ever seen, reaching close to 10 billion people by 2050, according to the UN.

All of this will place an increased burden on those places around the world where the climate is more temperate and staple foods can be grown to support populations in areas whose agriculture can no longer sustain the populations living in those areas.

With a growing global population, threats to farmlands, and the most affected being the least able to afford to import the food they need, it isn’t hard to see why many scientists have started aggressively researching and innovating new ways to address the challenge of food insecurity in the 21st century.

Build Up What We’ve Got: Improving the Durability and Yield of Crops

For as long as we have harvested grain and planted seed, we’ve been breeding plants and animals to select for the traits we want and against ones we don’t. In order to fight the coming crises, scientists don’t have the time to rely on the long process of cultivating selected traits, they have only a few decades at most to prepare for what is looking like an unprecedented challenge to our food supply.

So they’re speeding up this process by skipping the breeding part and taking more direct routes to alter the genetic traits of crops. These genetically modified organisms, or GMOs, have been a controversial subject for many, but giving that established GMO techniques like splicing are not likely to increase yields sufficiently for our needs, scientists are increasingly turning to direct gene-editing through CRISPR-Cas9.

This new method of genetic modification will allow scientists to develop crop species that simply weren't possible before and may be the key to shoring up our current food supply to meet our needs going forward. Though acceptance of these new crops may not happen overnight, in the face of a looming hunger crisis on a global scale, it is almost certain that these crops will be part of the solution, for better or worse.

CRISPR is not the only controversial technology to play a part in the future of food. Since they were discovered and isolated, stem cell research has been a matter of considerable controversy as well as excitement—and not just for the medical community and public policymakers.

Over the past decade, researchers have used stem cells from different animals to grow muscle fiber in labs, promising a way to produce as much meat as necessary to meet the demands of a growing population. What’s more, lab grown meat can potentially match or exceed the output of our current system and has a tiny fraction of the ecological impact that meat production has today.

With beef production being one of the biggest drivers of human-caused Climate Change, reducing this impact is critical. Lab grown meat then will both help alleviate the underlying cause of food insecurity as well as provide a more sustainable alternative source of nutrition for an increasingly hungry world.

Out With The Old, In With The Eww!

Insect-dieats in human societies has a long history and, if you think about it for a minute, it makes sense.

First, they’re plentiful, reproduce in large numbers, and can be incredibly nutritious. Second, insects are some of the most protein dense animals in the world. Third, insects have always been the main source of nutrition for countless animal species since they first appeared in the food chain. Even our closest primate cousins still consume insects as a major source of nutrition, so why should we be any different?

More than 2 billion people globally have adopted insects into their diets long ago; it's largely Westerns who stubbornly haven't gotten with the program. Considering that crickets convert vegetation to edible proteins much more efficiently than cattle and have none of the ecological impact that beef production does, we have all the more reason to incorporate them into our diets.

We cannot discount the cultural taboos that keep insects off our dinner plates, however, as they are real, powerful, and ingrained. One of the ways scientists and some forward-thinking start-ups are working to get around this is recognizing what makes us so resistant to eating insects: we gotta look at the thing and there is a nearly insurmountable ick-factor to overcome.

Their solution is simple, dry them out and turn them into flour. If humans don’t have to see the insects they are eating, these companies hope, people will be much more amenable to incorporating this vital food source into our diets.

The Future Of Food Can Be Secured

Easily the biggest challenge in getting people to adopt these new and more sustainable sources of food is complacency. It is simply easier to go to the market and buy the fruits, vegetables, and meats we’ve always bought, putting off the transition for as long as possible.

The transition is inevitable though, as population growth and climate change will force the issue of food insecurity on humanity one way or the other. The good news is that humans have proven to be highly adaptable when pressed by circumstances, so there’s no reason to believe that we cannot do so again; especially when the fates of billions may hang in the balance.

The Story of Earth: From Clumping Dust to an Eventual Fiery Destruction