The 10 largest solar power projects in the world 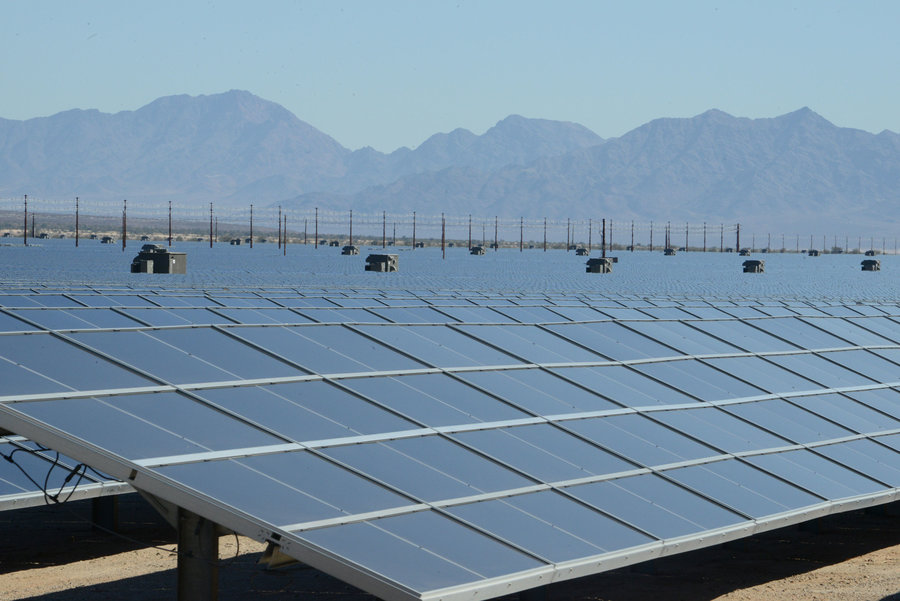 As renewable energy development increases around the world, some countries are investing in some truly huge projects, particularly when it comes to solar power. The two major solar technologies being used for such projects are solar PV solar farms, incorporating rows of PV panels with automated solar trackers, sophisticated management systems and even automated cleaning systems, and concentrated solar thermal power (CSP) plants which involve the use of parabolic mirrors reflecting and concentrating sunlight on a solar power tower to drive a steam turbine. Some of these facilities also incorporate molten salt energy storage technology to increase generation efficiency.

Some of the most amazing projects are located in big empty spaces such as the Atacama Desert in Chile and the Mojave Desert in California, which means there’s plenty of ground available as well as a high solar power generation potential.

This is a truly massive project located in the Indian state of Rajasthan on 20,000 acres (30 square miles) of land jointly owned by the Indian government and a company producing salt. The land allocated to the project is no longer required for salt production as the salt deposits have now dried up. Originally there was some concern that it would have a negative environmental effect on the nearby Sambhar Lake as well as other adverse effects on local villages and settlements. The lake is a protected area under the international Ramsar Convention and these issues appear to have put a brake on the project’s development.

The first phase of the project cost $1.2 billion and the Indian government sought $500 million in loans from the World Bank to help fund the first 750 MW. The project is being delivered by a consortium consisting of six state-owned companies including Bharat Heavy Electricals Ltd., Power Grid Corp of India and the salt company, Hindustan Salts. According to the director of India’s Ministry of New and Renewable Energy, A.N. Srivastava, the project will have a lifespan of 25 years and will reduce the country’s carbon footprint by over 4 million tons of carbon dioxide per year. The project has been included in India’s National Action Plan on Climate Change and is expected to cut prices for solar energy. It will also close a significant gap between power production and power demand in rural areas.

At present, around 67 percent of India’s energy needs are met by coal burning, which are rapidly declining. Mr Srivastava has said publicly that in order to offset this, the country needs a “clean energy revolution”. That may indeed be achieved given that the country benefits from nearly 5,000 trillion kilowatt hours per year of potential solar energy generation. However, at present, only 2,000 MW of solar have been connected to the grid.

Construction of the Topaz solar farm in California was completed in December last year, with the installation of the final 40 MW phase of the project. At 580 MW, it is the first solar farm in the US with a total capacity of over 500 MW. It is situated on the Carrizo Plain in San Luis Obispo County and has taken two years to build, costing $2.5 billion and covering 9.5 square miles of land. The facility, developed by First Solar, is expected to generate enough power for 160,000 homes, supplying most of the electricity demand of the city of San Luis Obispo. It will also generate an estimated $417 million of economic benefits, including property and sales tax revenues, direct and indirect employment and revenue from induced spending and the supply chain.

The solar farm consists of 9 million CdTe (cadmium telluride) thin-film PV modules, the first of which was installed on October 24th 2012.

The Solar Star project consists of two facilities, known as Solar Star 1 and 2, located in Kern and Los Angeles Counties in California. Development of the project began in 2013 and was completed on 19th June this year. It consists of over 1.7 million solar panels covering 3,230 acres of land and delivering 579 MW to the California grid, making it the largest solar farm in the world. A modular construction design known as Oasis Power Plant technology, enabled the solar farm to be rapidly deployed. Each block in this system has solar trackers, pre-manufactured cabling, an inverter and a management system. They are manufactured at a separate location and shipped to the site pre-assembled. The cleaning system is also fully automated in order to save time and reduce costs.

The project is owned by BHE Solar, a subsidiary of Berkshire Hathaway Energy which also owns the Topaz project and the Desert Sunlight solar farm. The electricity generated by Solar Star is being sold to Southern California Edison, a state utility, under a long term purchase agreement, and represents enough power for 255,000 homes. Economic benefits include the creation of 650 construction jobs over the three-year construction period, plus 40 operations and maintenance jobs including 15 full-time site roles. The facility will displace 570,000 tonnes of carbon dioxide, which represents the equivalent of removing over 2 million cars from the road over a period of 20 years.

The Ivanpah solar power plant is a concentrated solar power (CSP) or concentrated solar thermal facility situated in the Mojave Desert in California. It generates solar thermal power through the use of parabolic mirrors arranged in rows that reflect the sun’s energy on to a small area at the top of a tower, which then concentrates it. This light is then converted into heat which is then used to drive a steam turbine which in turn drives a generator or powers a thermochemical reaction, the latter process being an experimental procedure introduced in 2013.

The facility, which in reality consists of three CSP plants arranged side by side, is the largest of its kind in the world. It incorporates 173,500 heliostats, each of which is equipped with two parabolic mirrors. These reflect the light onto three solar power towers. The plant was developed by BrightSource Energy and Bechtel and cost $2.2 billion to develop. NRG Energy is responsible for its actual operation.

At 377 MW, the plant was expected to generate enough solar power to supply 140,000 homes, reducing carbon emissions by more than 400,000 tons per year.

However, results have been somewhat disappointing in that, according to data provided by the US Energy Information Administration in October 2014, the plant has only generated a quarter of the electricity it was expected to generate. Part of the problem was down to various equipment challenges which in turn has impacted on plant availability. The issue has been exacerbated by an increased requirement for natural gas (as backup power to keep the turbine running on cloudy days) than was originally expected. Nevertheless, the major problem was that 2014 cloudier than average. Furthermore, many such plants fail to meet expectations when they first start operating, according to Robert Boehm, a mechanical engineering professor at University of Nevada, Las Vegas (UNLV) and director of the school’s Center for Energy Research. If so, the facility may yet reach its 1 million MW in 2018 target, while continuing to fool passing travellers into thinking it’s some kind of government-sponsored UFO base – CSP is still new and therefore is an amazing spectacle to those who see it.

The Agua Caliente project is located in Yuma County, Arizona, 65 miles east of Yuma, covering 2,400 acres of land. It currently has 290 MW of generation capacity connected to the electricity grid and was constructed by First Solar, which also designed and developed it. The company also operates and maintains the facility for its owners, NRG Energy and MidAmerican Solar. Between 400 and 450 workers were involved in building it. The plant generates enough energy for 230,000 homes at peak loads and was funded with the help of a $967 million loan guarantee from the US Department of Energy plus equity from the two owners.

The project incorporates thin-film CdTe solar panels and was one of the first to be connected to a 500 kV transmission line. It incorporates First Solar’s grid integration and plant control system which manages the facility’s reliability and ensures its stability. It can also be controlled remotely from the First Energy operations centre. The facility went online in April 2014.

This solar farm is located in Okayama prefecture, Japan, on a former salt field and is owned by Setouchi Future Creations LLC. Construction of the facility began in November 2014 with completion expected in 2019. Initially the construction costs were estimated to be around $1.1 billion with part of the funding coming from $867 million in loans provided by Japanese banks. The solar farm will be powered by technology from GE and Kuni Umi Asset Management with GE providing 94 1 MW Brilliance solar inverters as well as its SunIQ platform. It’s the third such project GE has become involved in this year.

The 155 MW Nzema Solar Park in Ghana is still under construction, being developed by Mere Power Nzema, a subsidiary of Blue Energy, near the village of Aiwiaso in Western Ghana. The 183 hectare solar farm is part of a range of projects covered by the Ghana government’s 2011 Renewable Energy Act. When complete, it will incorporate 630,000 solar panels, which means it will be the sixth largest solar farm in the world according to Penn Energy. It will connect into the 61 kV West African Power Pool transmission line which links Ghana with Ivory Coast, Togo, Benin and Nigeria. The facility will increase Ghana’s current generating capacity by 6 percent and will meet 20 percent of the Ghana government’s target of generating 10 percent of the country’s electricity from renewable sources by 2020. The facility is due to go online in 2017. 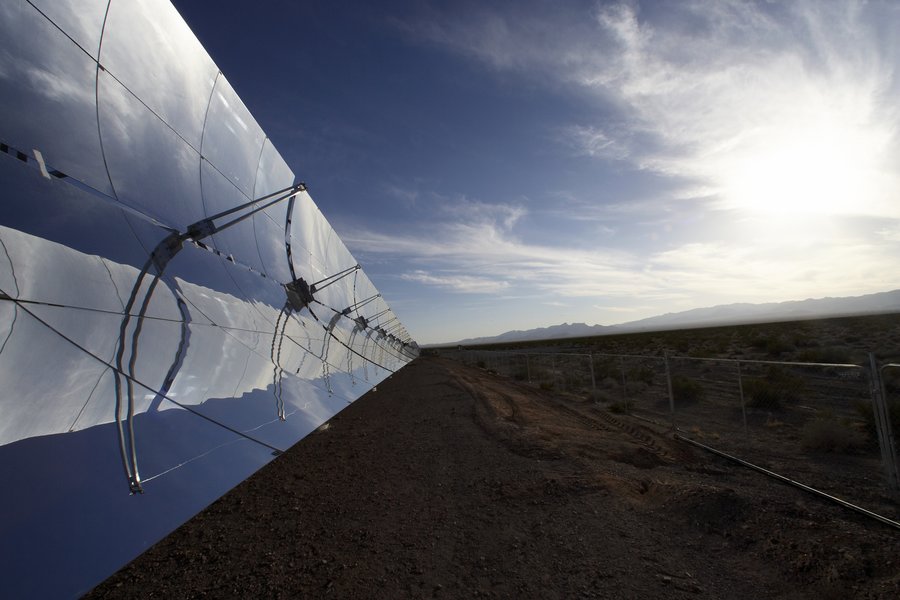 The South African government has awarded utility-scale solar developer SolarReserve and Saudi company ACWA Power preferred bidder status for this project which will consist of a 100 MW concentrated solar thermal power plant (CSP) in South Africa’s Northern Cape Province at Postmasburg near Kimberley. It will be located close to the existing Jasper PV project and will utilise molten salt energy storage technology. Redstone is part of the South African government’s Renewable Energy Independent Power Producer Procurement Programme (REIPPPP), along with the Kathu Solar Park. The South African government is hoping for 80 jobs created during its construction.

This project is situated in the middle of Chile’s Atacama Desert, 37 kilometres from Copiapó. It is the largest solar plant in Latin America with 100 MW of capacity and was inaugurated by Chilean President Michelle Bachelet in June last year. It was developed by SunEdison and cost $250 million to build. The facility incorporates 310,000 solar panels generating a projected 270 GWh of electricity, enough power for 125,000 Chilean households. Power generated by the facility will be supplied to CAP Group under an offtake agreement. This should save the company 71 million litres of diesel per year, representing 15 percent of its energy demand.

The Jasper project was completed in October 2014, two months ahead of schedule, and is located near Kimberley in South Africa’s Northern Cape Province. It is a 96 MW solar PV plant consisting of 325,000 solar panels which will generate enough power to supply 80,000 homes. Google invested $12 million in the project, signalling the start of wider investment in Africa by the company. Construction costs amounted to 2.3 billion South African Rand ($260 million). The facility is also part of the South African government’s REIPPPP, which means that part of the revenue generated by the plant will be redistributed for rural development and education.