These are top 10 most remote places on earth which are either inhabited by original inhabitants or by scientists and researchers.

Technology has made our world even more accessible. In today’s interconnected era, reaching to places which once seemed impossible is now accessible by means of road and rail systems, waterways and airplanes. For adventurous travelers though, an enthralling journey is the one that is all about exploring wilderness and reaching out to uninhabited places on Earth. It will be surprising to know however, that there are hardly few places left uninhabited on our Earth. Although few, we humans exist even at the remotest and isolated part of our planet. As a travel freak, choosing the road least traveled to discover remote places might not work. Here’s a list of 10 most remote places on Earth, where humans have already marked their footprint.

Palmerston Island is located in the Pacific Ocean and is situated 310 miles, North-West from Rarotonga, the capital of Cook Islands. It is one of the sandy islets made up of continuous ring of coral reef, also known as coral atoll. 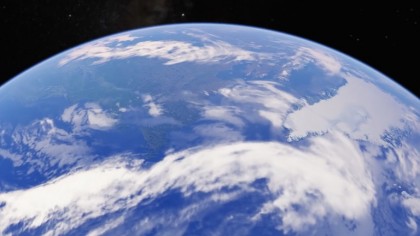 There are only 62 people living in Palmerston and 59 of them are the descendants from an Englishman named William Marsters. It is believed that William arrived on the Island with two Polynesian wives and added a third wife later on to expand his family of 23 children, whose descendants are now inhabitants in Palmerston. It takes a 2-day sailing voyage to reach Palmerston from Rarotonga and an 8-day trip from Tahiti. There is also an internet facility available and the Island was recently upgraded with a solar power plant to generate electricity round-the-clock.

With a population of just 500, Oymyakon is a village located in Russia along the Indigirka River. Being tagged as one of the coldest inhabited places on Earth, the temperatures here have been recorded to as low as -90 degrees Fahrenheit. The average winter temperature in Oymyakon stays at around -58 degrees Fahrenheit. People here rely completely on meat as it is impossible to grow crops in such a spine-chilling weather and on a ground that’s frozen permanently to a depth of 5,000 feet. It can take several days to reach there. The closest you can get to Oymyakon through a flight is either at Yakutsk or at Magadan, from where a 560 miles drive on a road that is known as “The Road of Bones”.

Pitcairn Island is part of a small group of islands in the southern part of the Pacific Ocean which is spread over 100 miles. With a population of just 57 (as of 2014), situated 3,300 miles from New Zealand, Pitcairn is the only inhabited island from the group and is also the least populous national jurisdiction in the world. It takes a 32-hour yacht ride to get there. The inhabitants today are mostly the descendants of mutineers who along with native Polynesians traveled on a ship called Bounty and settled on the Island.

Ittoqqortoormiit is one of the remotest places on Earth situated in eastern Greenland. Due to its aloofness, it is also known as the remotest inhabited community in the western hemisphere. The town has a population of 452 and people here mostly rely on polar-bear and whale hunting for living. It is also their main source of income apart from tourism which has gradually started growing. Getting there requires a helicopter from the nearest Airport in Nerlerit Inaat, which is 24 miles away. Boat transfer is also available during certain months in a year.

Chang Tang is a part of Tibetian Plateau that extends from western and northern Tibet to Ladakh in India. It is spread over 990 miles and is home to Changpa, a nomadic tribe in Tibet. Chang Tang is home to nearly half a million nomads, but they are often difficult to find. A Swedish explorer Sven Hedin reported not seeing even a single person in 81 days while crossing Chang Tang. There’s the nearest airport in Leh though, through which you can access Chang Tang, but it requires a permit to enter.

McMurdo Station is a research center established by the United States in Antarctica. The station is capable of managing 1, 258 residents and is the largest community in the entire Antarctica. However, the population drops to 250 during winter due to extreme climate. The station consists of more than 85 buildings including harbor, helipad, stores, clubs, power plants, warehouses and two ATMs. Going there for fun is almost impossible. You need to be a scientist, a military person or an artist. This place is also one of the hardest places to get to in the world. The pilots need to be capable of landing the aircraft on ice as there are no paved runways.

Socotra is one of the largest of the four Islands that form an archipelago, located in the Arabian Sea. It is one of the territories of Yemen and has a population of over 44,000. However, the Island is very isolated and is famous for odd-looking, rare species of plants, one-third of which cannot be found anywhere on Earth. Socotra is often described as “the most alien-looking place on earth” and is recognized as world natural heritage site by UNESCO. The island is about 400 miles away from Sanaa, the capital of Yemen.

Also known as the “Desolation Islands”, Kerguelen Islands are a group of islands located in the southern Indian Ocean. Being one of the most isolated places on earth, these islands have no original inhabitants, but 45 to 100 scientists, engineers and researchers have permanently occupied the island as a part of the French Southern and Antarctic Lands. Located almost 2,000 miles away from the southernmost part of Africa, the only way to reach the island is by ship that departs only four times per year.

Whittier is a small town in Alaska located 58 miles southeast of Anchorage. The area where the town is at present was developed during World War II. The US Army constructed a military camp and a port near Whittier Glacier. Currently, the town is home to 214 residents and most of them live within the same 14-storey building known as Begich Towers. There is only one way to get there, which is through a 13,300 ft., long combined rail and highway tunnel that connects Whittier with south of Anchorage.

Tristan da Cunha is a group of volcanic islands in the South Atlantic Ocean and is the most remote inhabited place in the world. The nearest inhabited land, Saint Helena is 1,200 miles away and the Island is 1,500 miles away from the nearest continental land, South Africa. There are a total of 262 inhabitants on the Island (as of January 2017). Getting there requires properly timing the visit, as fishing boats from South Africa provide transportation service only eight to nine times a year.