The 11 New Technology CEOs You Need to Know About

We live in an age where tech CEOs and founders can quickly become household names. 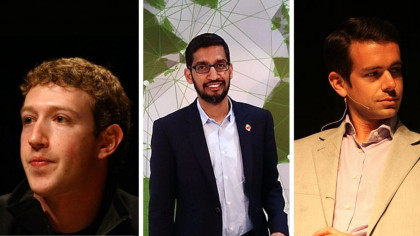 17+ Inspiring Quotes From the Most Successful Tech CEOs

From Bezos to Zuckerberg, tech personalities are becoming more and more well-known globally.

While you can probably already name a lot of the major players in tech today, there are a few up-and-coming chiefs that you ought to keep your eye on.

Here are just some new technology CEOs who have the potential to shape the industry in the years to come.

Blockchain-based YouTube competitor, Lino, made waves in February of this year when it managed to raise $20 million in funding. The exciting new platform seeks to decentralize video content distribution, and give greater control to its creators.

CEO, Wilson Wei, is dedicated to eliminating what he regards as the "middleman" in video content distribution. A recent grad of UC Berkeley's Haas Business School, Wei is poised to become a force to be reckoned with in both the crypto and video distribution worlds.

AI facial recognition company, SenseTime, hit headlines in April of this year when it was announced that they'd received $600 million in round C funding. The bulk of the support came from Chinese giants, Alibaba, who have expressed an interest in integrating AI into their business.

The company is helmed by Dr. Xu Li, a celebrated researcher of computer vision and computational photography. With ten years of experience and an impressive academic pedigree, Li is leading SenseTime towards a tremendous amount of success, while furthering AI technologies and their applications globally.

Nobody is currently doing business quite like Zapier. The service, which connects various applications and online functions for smoother workflow, famously offered prospective employees $10,000 in moving expenses to leave the Bay Area.

It might sound like an unorthodox decision, but it's one that CEO Wade Foster stands by. Foster's creative approaches when it comes to his workforce is just one of the things that set him apart from other CEOs working in tech today. With Foster as their leader, Zapier is improving the way we work online, while allowing their employees the freedom to work from anywhere in the world.

The race towards automation and the widespread industrial use of robots continues to speed up. Fetch Robotics specialize in robots for both industrial and commercial use, including a self-driving cart.

CEO and co-founder, Melonee Wise, has been passionate about robotics for almost two decades. She boasts an impressive background in both the automobile and aerospace industries, and previously held the position of manager of robot development at Willow Garage.

From my time in Nara

Shipping software, Shippo, is giving much-needed assistance to online retailers in finding the best logistical solutions for their needs. With the rise of independent marketplaces online, Shippo provides a valuable service to a market that few others have managed to tap.

Co-founder and CEO, Laura Behrens Wu, was given the honor of being named among Forbes' 30 under 30 List in 2017. She regularly writes pieces advising other young founders on how to get the most out of their companies, and is set to inspire a whole new generation of young, female tech executives.

Gigster has been transforming the way companies work with programmers and developers, by providing a platform for the outsourcing of software development. The startup gained popular attention for raising $32 million in funding, with notable names among their funders including Ashton Kutcher and Michael Jordan.

CEO and founder, Roger Dickey, is no stranger to the tech world. He first made his mark with Curiosoft, a Facebook game company which he sold to Zynga in 2008. A seasoned entrepreneur, he was one of the driving forces behind the ultra-popular Facebook game, Mafia Wars. Today he's using his creativity and enthusiasm to forge better connections between companies and freelance coders.

It takes a certain level of ambition to become a competitor for GitHub. Since its launch in 2011, GitLab has been a vital tool for a variety of companies, ranging from NASA to Sony. After GitHub's acquisition by Microsoft last month, the popularity of GitLab soared.

Co-founder and CEO, Sid Sijbrandij, was instrumental in tripling the company's workforce and securing $20 million in Google Ventures funding. Sijbrandij previously founded online publisher, Comcoaster, where he was responsible for software development. With GitLab's profile rapidly growing, Sijbrandij is poised to become a powerful figure in tech.

Heptio grew out of Google's Kubernetes project, which sought to automate management and deployment of containerized applications. Heptio simplifies Kubernetes for wider, more accessible applications by different companies and developers. With the edge of being led by the creators of Kubernetes themselves, Heptio is ahead of the same when it comes to streamlining tech.

Craig McLuckie is the co-founder and current CEO of Heptio, and previously worked as a product manager for Google. It was during his stint at Google that he worked on the Kubernetes project, along with several other commercial cloud-based products. Prior to working at Google, he amassed ten years of experience working for Microsoft. All these combined means that McLuckie has a uniquely strong background, which has served him well as the chief of one of the most interesting tech startups in recent years.

Figure Eight, formerly known as CrowdFlower, is one of the most interesting AI and machine-learning companies currently active today. Founded in 2007, the company's software is used for automating machine learning tasks and is one of Amazon's AWS Machine Learning Partner Solutions program's Machine Learning Competency Partners. Earlier this year, they were included in the Forbes list of 100 Companies Leading the Way in AI.

Co-founder and CEO, Lukas Biewald, previously worked for both Microsoft and Yahoo! Japan. A seasoned entrepreneur within the tech industry, Biewald was named one of Inc. Magazine's 30 Under 30 in 2010. He's seen Figure Eight from its early days of focusing on the breakdown and distribution of digital projects, to its current incarnation, proving that he's an adaptable leader ready to adjust with the times.

If you're a programmer, then you're likely well-acquainted with Stack Overflow. The popular questions and answers site allows developers to exchange expert knowledge, and even get connected to potential employers. As of this year, the site exceeded 16 million questions, and shows no signs of slowing down.

Joel Spolsky is the site's co-founder and current CEO, and is perhaps better-known as the creator of the popular work management application, Trello. Spolsky previously worked for Microsoft, but it's in recent years that his entrepreneurial spirit has gone from strength to strength. With an ever-expanding list of achievements to his name, Spolsky is set to become a serious tech contender.

As technology improves, so too must security. Cybersecurity platform, HackerOne, takes a unique approach by connecting businesses with cybersecurity researchers. It's currently the largest crowd-sourced cybersecurity firms, boasting a network of 100,000 hackers in 2017.

Current CEO, Marten Mickos, had his start in the tech industry through working for Hewlett-Packard. He also previously held the position of CEO for cloud computing company, Eucalyptus Systems. He regularly speaks on the topic of leadership in tech, and is certain to become one of the leading figures in cybersecurity.

Comets: Everything you need to know about 'dirty snowballs' of space