The 25 Ways AI Can Revolutionize Transportation: From Driverless Trains to Smart Tracks

The transportation industry is in a state of flux thanks to ever-evolving technologies. Here's what to expect from AI in transportation.

With massive breakthroughs in smart technologies being reported every month, it won't be long until our transport industries are dominated by AI.

Here are just some of the ways artificial intelligence is changing the face of transport, and what we can expect in the near future.

1. Autonomous Cars: Driving Towards the Future

Autonomous cars have quickly moved from the realm of sci-fi into reality. Though still in the early stages, these AI-driven vehicles could drastically change how we get from A to B in the near future.

From plowing snow to collecting garbage, self-driving trucks could soon be taking over a lot of our dirty work. The technology behind these trucks could also be utilized in freight, capable of transporting 2,000,000 pallets a year each.

One of the biggest areas where AI is poised to have a massive impact is public transport. Already driverless buses have been popping up across Europe, using sensors, cameras, and GPS to safely ferry passengers to their destinations.

4. Olli by Local Motors: Driven By the World's Most Famous Computer

Two years ago, Local Motors unveiled Olli - an autonomous vehicle that is driven by IBM's Watson. In addition to being driven by AI, Olli is also fully electric, representing a new wave of smart, sustainable vehicles.

Machine learning could soon be used to predict and prevent traffic jams. Engineers in both Singapore and China have been working on traffic management systems that would process complex data in order to advise on the best routes for drivers.

One particularly promising traffic control system is SURTRAC by Rapid Flow Technologies. Designed specifically for urban areas, it allows lights at intersections to respond to vehicle flows on an individual level, instead of as part of a centralized system.

7. TuSimple: At the Forefront of Self-Driving Trucks

Chinese company TuSimple secured $55 million in funding last year to bring their self-driving trucks to the US. Their trucks utilize long-distance sensors with a full observation range, and its deep learning AI can detect and track objects using its multiple cameras.

Drones have already been rolled out in delivery systems, and soon they could be used as taxis too. Uber already have their sights set on electric flying taxis, and Dubai saw the maiden voyage of a drone taxi in 2017.

Public transport isn't the only industry that could benefit from advancements in artificial intelligence. Rolls-Royce has been working on crewless cargo ships for the past few years, and expect them to launch by 2020. These ships would be remote-controlled and are expected to pave the way for fully autonomous ships in the future.

This year saw London test its first autonomous train in their underground system, and many countries are poised to follow suit. One of the main advantages of automated trains is that they can carry more passengers, as space no longer has to be reserved for the driver's cab.

11. Bio Transport Tickets: Never be Without Your Ticket

Last year's story of a Sydney man who implanted his travelcard into his hand went viral and could be a sign of things to come. Already commuters in Sweden have been testing microchip implants as tickets, and the technology could save people an enormous amount of money in fines for fare evasion.

China has been leading the charge when it comes to smart rail technologies. Launched last year in the city of Zhuzhou, the ART - Autonomous Rail Rapid Transit - doesn't require tracks. Instead, the train follows a virtual track made of painted dashed lines.

This year has already seen the dawning of the age of autonomous delivery trucks. Though the bugs are still being worked out of the technology, driverless delivery vehicles for food and mail are becoming more and more of a reality.

14. Digital Number Plates: A Smart Upgrade for Your Car

Even the humble number plate is set to get a smart technology facelift in the near future. Dubai is already looking to test digital number plates which can alert authorities in the event of an accident, and the U.S. is planning to roll out 100,000 similar plates this year.

These number plates could use GPS to track your location, sync with your bank account to pay any parking fines, and would dramatically cut down on instances of theft.

15. Airport Face-Scanning: The Future of Flying

Airports could soon be ditching traditional passports in favor of face-scanning technologies. Scanners are already being used in some US airports to confirm the identities of passengers before allowing them to board, and China and Dubai are both following their example. 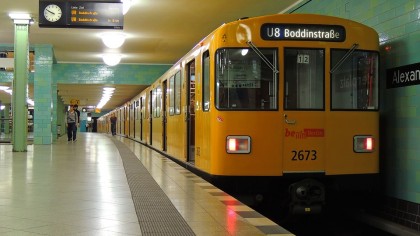 Though there's significant controversy surrounding face-scanners and how they could impede on the privacy and freedom of passengers, it doesn't seem likely that they'll be disappearing any time soon.

16. Google Flights' Delay Predictions: Know About Delays Before the Airline

Earlier this year it was reported that Google Flights was using machine learning to better predict flight delays. The revolutionary new technology allows Google to know about delays before the airlines themselves, using data from previous flights so passengers can get the best idea of their expected flight time.

17. The Trainline App: Helping You On Your Commute

Thanks to its BusyBot technology, the Trainline app can help passengers not only book and buy their train tickets, but also find a vacant seat on the vehicle in real-time. The bot asks passengers to report how busy their carriage is and then uses this data to advise you on where to sit.

The app also offers price prediction, allowing passengers to avail of the cheapest possible fares for their journey.

18. Pilotless Planes: Is the Profit Worth the Risk?

While air taxis are fast becoming a reality, pilotless planes are something we might have to wait a bit longer for. The advent of autonomous planes could yield an enormous profit - with recent studies suggesting as much as $35 billion could be gained in the transition from pilot to pilotless aircraft. Though a great deal of piloting already relies on automatic technologies, a fully autonomous plane could potentially present some security risks.

Most autonomous technologies will feature a manual override and its important that if pilotless planes do become a reality, that this override isn't compromised or exploited by individuals who don't have clearance.

Sadly, traveling alone can still be a dangerous and frightening experience for women around the world. The JOZU app allows women to decide on the safest routes, methods of transport, and more by collecting user data and determining the best courses of action.

With electric vehicles becoming increasingly common, many countries are taking the initiative to incorporate smart technologies into their roads and highways. China has already built a smart highway that can charge electric vehicles as they drive, and Australia has plans for similar technologies.

21. Smart Luggage: The Best Way to Transport Your Belongings

You can now track your luggage, no matter where it may be, thanks to built-in GPS tracking. Not only that, but some smart baggage come equipped with weighing scales, which allow you to view the weight of your luggage on your phone.

When it comes to transporting your belongings around the world, smart luggage looks like it's set to become the most secure and convenient option.

Earlier this year, Ford announced that it intended to file a patent for a robotic police car. The design featured AI technology that allowed the unmanned vehicle to issue tickets and violations to speeding cars by scanning registration numbers and accessing CCTV footage.

Dubai has also enlisted the help of smart technologies in its police force, with smart police cars using face-scanning and machine learning.

While autonomous cars won't hit the market for some time, that doesn't mean current vehicles are lacking in the AI department. Many recent and upcoming cars feature sophisticated driver assist programs, that can help even the most inexperienced drivers on the road.

This includes sensors to detect obstacles and other vehicles, as well as GPS routing.

Rather than focusing simply on vehicles themselves, Ford has designed a fully smart city that would better accommodate AI-assisted cars and trucks. The plans feature a system that allows smart vehicles to connect and co-ordinate, to cut down on risks of collisions or other accidents.

The city itself would collect and share data from its citizens with the many smart technologies working in tandem to create a digital utopia.

Earlier this year, Sony announced its intention to launch an AI ride-hailing service in its native Japan. The proposed service will use AI to manage fleets and give an overview of potential issues like traffic jams and detours due to events.