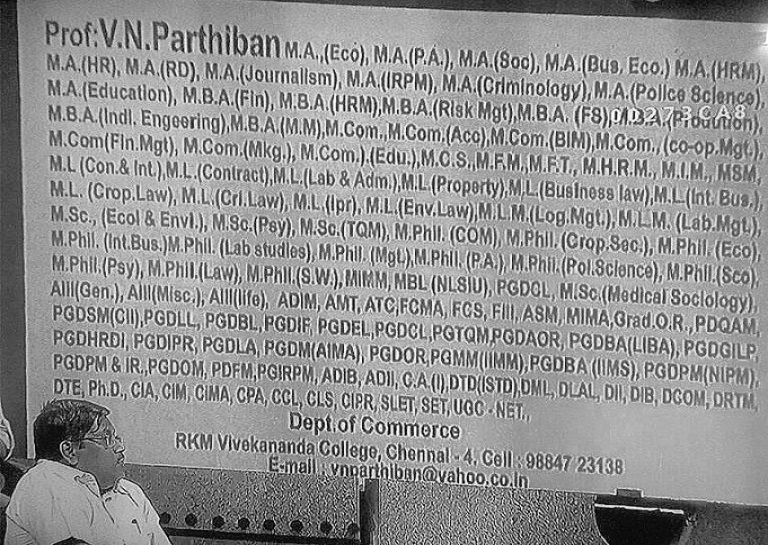 Spending four years achieving four degrees can seem like a daunting task. However, imagine raising that bar by more than 36 times. That is precisely what 50 year old professor VN Parthiban achieved through 30 years of studying.

Parthiban holds many degrees across business, accounting, economics, and countless others.

This is the longest list of qualifications I have seen. pic.twitter.com/jdoTGnjmtX

His achievements are an academic marvel, but one must put into question how does he do it?

"I really enjoy studying. It's not difficult at all,"

"I have been continuously in the process of preparing for exams and applying for new degrees or diploma courses."

Surprisingly, Parthiban is seemingly ordinary- besides his eager desire to complete as many degrees as he can. His success is derived from the long hours he spends studying which he enjoys more than anything else. His success, however, did not come easy.

"I struggled hard to finish my first college degree and got a job in the judiciary department,"

"Then I started to apply wherever they do not require a transfer certificate for registration so that I could study different courses at the same time."

His heavy workload, however, still bears down on his mental capacity, causing him struggles in remembering peoples faces or recall routs taken to familiar places. He sometimes even resorts to asking people multiple times on how to get somewhere.

''Sometimes I have asked the same person the same route for two days on end. People used to get very angry. But you know, I do not burden my mind with anything that is less important. I keep my mind calm"

Some courses, however, Parthiban could not find success in. With a wife at home and many lectures to teach, Parthiban sometimes runs out of time to study sufficiently for his exams. As a result, Parthiban even failed many exams.

"I failed in Actuarial Sciences. The course required a lot of mathematics, and I didn't put in enough effort," he said. He couldn't finish his CA (Final) because when he was studying for the course, he was also working in a government-aided college. "The college took a lot of my time,"

However, that is hardly enough for a reason to stop. The desire to learn still resides within Parthiban.

"I am planning to join more courses,"

Perhaps, in essence, the professor has demonstrated the power of studying and that a 'normal' mind can achieve amazing feats through time and dedication. Although, perhaps obtaining 100 degrees and counting is a slightly absurd goal.