Australian Farmer Uses Laser as Scarecrow to Protect His Vineyard

This robotic scarecrow uses lasers to shoo birds from crops.

Scarecrows have been around for a very long time since the ancient Egyptians used the decoys to protect wheat fields from flocks of hungry quail. Now, they’re a bit different. Farms like Meduri Farms in Jefferson, Oregon, USA are using an automated bird laser to deter birds from attacking their blueberry crops.

Justin Meduri, Farm Operations Manager of the farms, realized that they were losing 25 percent of overall potential crop volume due to pesky birds like the American Robin, Blackbird and European Starling which cost the state of Oregon over $11 million in lost blueberry harvest each year. Meduri himself was losing about USD 100,000 in revenue.

Using a system called the Agrilaser Autonomic made by the Dutch Bird Control Group, Meduri estimates that the system has so far saved him 578,713 pounds of blueberries annually thanks to the six laser machines he installed on the farms.

“Previously we had to work hard to keep the birds away. Last year before the lasers, we experienced the highest damage incurred by birds ever. Now with the lasers, we don’t even have to worry about it – we simply have no issue anymore,” he relayed to Bird Control Group.

Lasers to repel birds is based on a legitimate science; the devices take advantage of a bird’s natural instincts. They will see the laser as a natural predator and fly away to safety. The lasers aren’t meant to harm the birds; rather they stimulate the flight response. Better yet, the birds won’t become habituated to the green beams, meaning the effectiveness of the machine is maintained.

“We dedicated years of research to develop the ultimate laser beam. This was accomplished by applying a combination of highly precise optics, filtering and light frequencies. The result is exceptional performance in bird repelling,” states the Bird Control Group website.

Safety-wise the Agrilaser uses a projection safety system to make sure the laser doesn’t stray outside a predetermined field pattern, if it does the machine will switch itself off. This is to prevent obstructing the view of motorists or passersby. It also doesn’t aim above to not interfere with air traffic.

The $10,498.75 machine also comes in two different versions, the Agrilaser handheld, and the Agrilaser Lite, less bulky and portable alternatives. 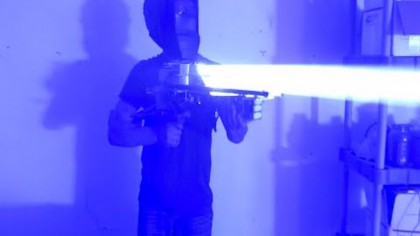 200 W Handheld Laser Bazooka is the Most Powerful Ever

The Autonomic is powered by both AC and solar charging and syncs with software on a laptop, where the user can save up to 16 different patterns and three different timeslots.

“Each individual pattern can be assigned to a timeslot, enabling bird repelling capability at the periods and places of your choice,” claims the company.

It also comes in three models, each with increasing laser output power. The Autonomic 100, 200 and 500. Reaching ranges of up to 2400m depending on the weather.