The Arctic Permafrost is Leaking Acid as It Melts

A new study warns about another impact of global warming in the form of gas-leaking permafrost which has begun melting.

Although there are a number of promising and innovative efforts in place to clean up the world's oceans, most notably Ocean Cleanup's System 001 which is on an unprecedented plastic debris collection mission, some environmental issues remain more difficult to address. Among these, the melting polar ice caps remain one of the most complex puzzles. 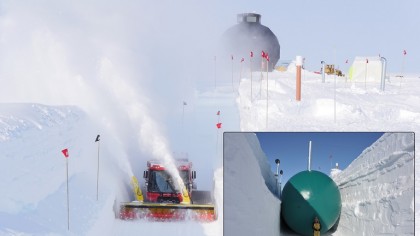 On the one hand, for archaeologists they are providing clues about how our distant relatives lived, but on the other hand, they are melting at a rate so alarming that it threatens to shift the world's ecosystem.

Now there is evidence that carbon gases which have been trapped inside of the permafrost could soon be released as it begins to thaw, a process accelerated by the global warming phenomenon. The team of Canada-based scientists who looked at the issue concluded that the impact will be:

--> This will compromise the physical characteristics in nearby areas, creating more thermokarsts, which are irregular surface with marshy hollows appearingin Arctic regions.

In the study they released, they are very clear about the very real environmental impact this change will create, explaining that "...thermokarst‐enhanced mineral weathering has potential to profoundly disrupt Arctic freshwater carbon cycling".

Lead author and University of Alberta PhD candidate Scott Zolkos explained the irreversible nature of the process to New Scientist:

“We can control many sources of CO2 to the atmosphere, caused by human activities, like fossil fuels and land-use change,” adding, “But once permafrost starts to thaw and release CO2 and methane, that’s beyond our control. It’s not like we can put a giant thermal blanket on the Arctic.”

A natural process that is occurring too quickly

Permafrost, although not constituting a significant geological surface mass in the earth, in terms of carbon reserves, the numbers are staggering.

According to Kevin Frost, one of the scientists based at the National Snow & Ice Data Center (NSIDC), a research organization studying the environmental aspects of all frozen regions in the world, concluded that at present the Earth's atmosphere there are roughly 850 gigatons of carbon.

The staggering number equates to the weight of about 100,000 school buses. Most alarming, however, is that about 1.7 times this number is trapped in the world's permafrost: 1,400 gigatons.

To put the process into perspective, Frost explains: "It's like taking a bag of frozen broccoli out of the freezer and putting it into the refrigerator. Once it thaws, it will eventually decay and break down."

What this seems to indicate is that future planning is of the utmost importance, as scientists continue to look for ways to produce tangible evidence of how reducing fossil fuel emissions will have an impact, which constitutes making even stronger cases to government about climate change.

Details about the study appear in an article, titled "Mineral Weathering and the Permafrost Carbon‐Climate Feedback", which was published on September 5th in the Geophysical Research Letters journal.