Elon Musk's The Boring Company has been recommended for a transportation project underneath the Las Vegas Convention Center, hoping to be ready for CES 2021.

While the proposed project is limited for now to a loop underneath the LVCC, the LVCVA leaves open the possibility of expanding the project to incorporate major Las Vegas destinations, such as McCarren International Airport, Downtown Las Vegas, the Las Vegas Resort Corridor and beyond.

“Las Vegas has maintained its reputation as a leading travel destination because we are driven by innovation and hospitality,” said Steve Hill, LVCVA CEO and President. “This project is an example of how our leading principles can create an experience benefiting our community and valued visitors.”

The LVCC is currently undergoing an expansion that hopes to extend the LVCC to 200 acres by CES 2021, set for January 2021. By then, attendees of the Convention facility would need to walk about 2 miles to go from one end of the convention center to the other, necessitating a new transportation system for the approximately 1 million convention goers every year.

“Las Vegas is a high-energy, high-technology destination equipped to welcome the world, and we are excited to deliver a system that will help visitors efficiently navigate the city’s many offerings,” said Steve Davis, President of TBC.

Choosing The Boring Company To Build The Loop, Hopes To Be Operational for CES 2021

Founded by Elon Musk, TBC focus is on building terrestrial transportation infrastructure at a lower cost than current infrastructure construction contractors. The TBC’s Research and Development Test Tunnel in Hawthorne, California is a fully-operational loop of 1.14 miles that reportedly costs less than $10 million per mile, factoring in internal tunnel infrastructure.

The LVCVA hopes to have the tunnel project completed in time for CES 2021. 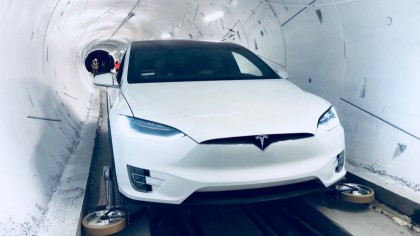 Anyone who has attended CES can attest to the monumental traffic snarl of taxis, Ubers, and shuttle buses that occur around the LVCC during the convention. According to the initial proposal by TBC, the underground loop system can potentially move 11,000 people an hour at a total construction cost between $35 million and $55 million, depending on the number and size of the stations, as well as the route used.

This was apparently good enough to beat out competing finalists for the project. Now, TBC and the LVCVA will determine the specific design and construction plans that will become the final contract, which the LVCVA will need to approve in a Board meeting expected in June of this year.

“Las Vegas is on the cutting edge of technology and this project reflects the incredible work that’s taking shape right here in Southern Nevada,” said Larry Brown, LVCVA Board Chairman and Clark County Commissioner. “It’s exciting to have the Las Vegas Convention Center campus at the forefront of this historic development in our destination and we look forward to this new mass-transit solution with The Boring Company.”