New research has found that we use different parts of our brains to process concrete and abstract language.

Language is generally divided into two categories: concrete and abstract. Concrete words are things that exist in reality, such as animals, paintings and food.

Abstract words relate to intangible things, not experienced through the senses. These words are defined through associated words rather than physical features.

A new study has explored the different areas of the brain that process these two types of words. “Although it is clear that different brain areas are involved in semantic processing of abstract and concrete words, it is still a matter of debate which brain areas encode the different types of information underlying the meaning of abstract and concrete words,” wrote Maria Montefinese, PhD, author of the review.

Montefinese examined three studies that first identified then observed specific regions of the brain that organize abstract and concrete ideas. The participants of the studies were given language based tasks while undergoing tests on their brain. 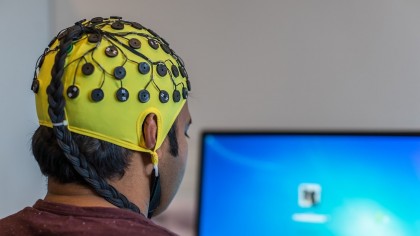 One of the studies involved a group of Native English speakers who were asked to complete two tasks that involved 40 concrete words. The initial task asked volunteers questions about the visual aspects of words, such as ‘is it round?’ the second task asked the volunteers to answer questions about general, more abstract characteristics of the words, such as “is it living?”

In another separate study, native Chinese speakers were asked to reflect on their familiarity with a series of words that represented over 300 abstract concepts. The results concluded that a network of several brain regions, including the inferior frontal gyrus (IFG) and the middle temporal gyrus (MTG), worked together to organize abstract information.

The IFG is a brain region associated with language processing. The MTG is a region involved with the retrieval of word meaning.

The final study examined by Montefinese involved a group of native Italian speakers. The volunteers were asked to decide whether strings of letters formed real words. Half of the supplied words were either concrete or abstract words, while the other half were made up words.

Results showed that the left IFG acts as a “neural crossroads” to differentiate between abstract and concrete words. “Together, these studies shed new light on how abstract and concrete concepts are represented in the brain [across] different languages,” Montefinese wrote. This research helps identify a “left-lateralized semantic network” that promotes better understanding of word-meaning structures in the brain.

“Together, these studies shed new light on how abstract and concrete concepts are represented in the brain [across] different languages,” Montefinese explained. The research will go some way to better understand how our brains specifically process different types of language.