A new discovery from Gobekli Tepe is revealing how a comet strike in 10,950 BCE may have forced the rise of an entire civilization that forever changed history's path.

Humanity has had both a fascination and a fear of comets for all recorded history, and a recent discovery at the Gobekli Tepe in Turkey might hold the key to our fixation: the Clovis comet impact that triggered the Younger Dryas period around 11,000 BCE. 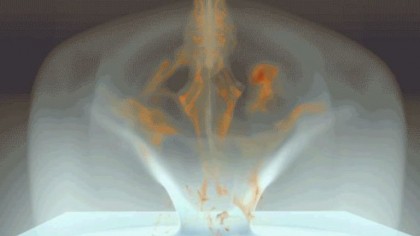 Evidence from ice cores in Greenland show that about 13,000 years ago, something drastically disrupted our climate. The change was sudden, and it wiped out the remaining great fauna on Earth at the time, including the wooly mammoth, the saber-tooth tiger, and the giant sloth.

In 2007, it was theorized that a comet strike triggered the Younger Dryas period. In 2013, this theory—known as the Clovis comet impact hypothesis—was apparently debunked.

The comet hypothesis has long been controversial and derided by many as a zombie hypothesis. But the theory was given a dramatic piece of evidence in its favor by discoveries at the Gobekli Tepe site in Turkey in April of last year, and subsequent discoveries since.

The Vulture Stone of Gobekli Tepe

Built in 9000 BCE, Gobekli Tepe is the oldest human structure ever found and is theorized to be a temple, an observatory, or even both. Inside, archaeologists found an 11,000-year-old pillar, which they call the Vulture Stone, that depicts a rain of comet pieces falling to earth, causing utter devastation.

It was the animal figures embedded in scenes, however, that stuck out most to the archaeologists. They ran the figures through a computer and compared it to known star positions as they would have appeared in 10,950 BCE, suspecting that the depictions weren’t animals but constellations from 13,000 years ago.

The computer reported a perfect match with star charts for 10,950 BCE. The stars in 9000 BCE would have been different than in 10,950 BCE, so the carvers of the scenes could not have been using their own constellations as source material. It had to have been something passed down to them from an earlier time, providing almost irrefutable evidence that it was, in fact, a comet impact that triggered the Younger Dryas.

For humans to carve the event into a pillar in a temple 1,500 years later demonstrates how significant an event the Clovis comet impact was for humans as a species—even if the humans who built Gobekli Tepe only knew of it as a myth or legend.

The Clovis comet itself wasn’t a singular entity, at least not at the time it hit Earth. It had broken into many pieces and formed a cloud of material that would have been a feature in the night sky for some time before the earth passed through it, meaning that humans on Earth would have plenty of time to watch it approach.

Passing through the debris cloud, pieces of the Clovis comet are believed to have smashed into our planet, causing devastation to the planet on a scale that is almost incomprehensible.

Samples from 170 sites from around the world reveal a layer of black ash dating back to the same time around 11,000 BCE, suggesting that the detonation of comet pieces in the upper atmosphere along with impacts on the ground caused fire storms that would go on to burn 10% of the world’s biomass in a matter of weeks. For humans on the ground who weren’t killed outright by the impacts, they would have to live through weeks of uncontrolled wildfires that lit one end of the horizon to another and would consume all the forests of North America.

In some instances, detonations in the atmosphere could have acted like point-blank blasts from a cosmic shotgun. There is evidence to suggest that anything below the exploding comet pieces would have been sprayed with bits of iron and nickel that acted like shrapnel, tearing through the hides of animals or flesh of humans caught in the open and embedding itself into their bones.

Sites in different parts of the world show that human activity came to an abrupt halt at the onset of the Younger Dryas, including the Clovis Culture of the American Southwest for whom the comet was originally named. From available data, one estimate suggests that the human population was cut in half within 900 years, but possibly as early as 200 years.

The Lasting Impact of the Clovis Comet

The Younger Dryas is the most significant period in human history not just because of the loss of life, but because the cooling of the climate and the extinction of game to hunt meant that humans stayed in one spot for longer and had to farm for food, developing agriculture for the first time.

Humans banded together to survive and built temples and observatories, like Gobekli Tepe, to study the sky that had so violently turned against them. Around such sites, the first towns eventually built up into cities. It was during this period that humans began to build the civilization we live in today.

The experience of the Clovis comet impact and the Younger Dryas that followed left a mark on our species for millennia, searing into the culture of the descendants of those humans forced to live through what one researcher at the Gobekli Tepe site describes as “probably the worst day in human history since the end of the ice age.”

As the Younger Dryas ended and human populations recovered, the cultural artifacts of the Clovis Impact may still visible in the art that they left behind. Just as the builders of Gobekli Tepe were passing down the traditional story of the cataclysmic events of 10,950 BCE, it’s possible that other artwork throughout the Neolithic period also shows the scars left by the Clovis Comet impact without the artists being entirely conscious of their origins.

Spirals and circular designs proliferated throughout the world in many different cultures for millennia may be a visual testament to what their ancestors saw in the night sky: comet fragments with tails that appeared to curve, just before those same objects destroyed the world as they knew it.

The Forge of Human Civilization

Whether the Clovis comet was the inspiration behind the art of the Neolithic is obviously impossible to know for certain, but what the Gobekli Tepe shows is that the cultural memory of the event was passed down for thousands of years. That Gobekli Tepe may have been an observatory for the night sky is also telling, since it seems that they were very conscious of how the heavens could affect life on Earth. After the Clovis comet impact, humans may have taken astronomy much more seriously. The math and science we use today was a direct outgrowth of astronomers in ancient times trying to predict astronomical events that they believed would have a direct impact on the lives of people below.

Gobekli Tepe no doubt has more secrets to uncover and there’s no telling what future sites may reveal, but it is all but certain that no other event in human history has had the kind of lasting impact on our species the Clovis comet impact. And after the Clovis comet, it’s no wonder that everyone throughout most of recorded history has dreaded the sight of a comet in the sky.