Research has emerged that offers new explanations for why the Maya civilization collapsed so suddenly. The Mayans were a group of people living in what is now known as the Yucatan Peninsula. 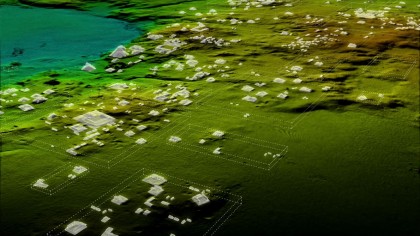 Researchers Use LiDAR to Find 60,000 Mayan Ruins Hidden in a Jungle

They are famous for being one of the most advanced civilizations of their time with complex writing systems and a focus on arts, science, and religion. Despite several centuries of development, many Mayan cities were abandoned quickly around 900 AD.

A mystery that continues to puzzle anthropologists and researchers. Theories about the demise range from deforestation, overpopulation to extreme drought. New research published in Science uses analysis of lake sediment to demonstrate that extreme drought is a likely significant contributing factor.

The researchers used sediment samples from Lake Chichancanab, Mexico, to determine that in a period of 100 years annual precipitation in the Mayan region dropped by 50% and up to 70% in years of extreme drought. The research is important as it goes to show just how devastating changes in the climate can be to human populations.

The layers of sediment under the lake were carefully analyzed to build a model of the climate conditions in the area including data like temperature and rainfall. During periods with less rain, the lake's volume would shrink, as the water evaporated lighter particles would have evaporated first, leaving behind heavier elements.

In times of extreme drought gypsum crystals formed and incorporated existing lake water directly into their structure. These ‘water fossils’ allowed the researchers to analyze the properties of the lake water across different periods of time.

"It's as close as you'll ever get to sampling water in the past," said Nick Evans, a graduate student studying paleoclimatology at Cambridge University and first author of the study. The fossil water present at Lake Chichancanab, indicates just how long and intense the periods of drought were.

Deforestation may have contributed to drought

The fossil water present at Lake Chichancanab, indicates just how long and intense the periods of drought were. Despite now knowing more about the climate conditions of the time, exactly why these dry spells occur still isn’t clear. On one hand, the extreme droughts match with an overall warming of the globe known as the Medieval Warm Period. A period of time when temperatures increased - likely caused by a decrease in volcanic ash in the atmosphere paired with increased solar activity.

Others suggest the drought is linked with evidence of deforestation in the area. The mass removal of trees tends to decrease the amount of moisture in the air as well as destabilize soil contributing to drought conditions.

The research has been published in Science.

The Silurian hypothesis: Was there a civilization on Earth before humans?