The Danger of 5G: 5th Generation Cellular Technology Might Be a Threat to Public Health

5G stands for 5th generation cellular technology, and it's coming your way in 2020. 5G will have an average download speed of about 1GBps (1 gigabyte per second). That means you can download an entire movie in about one second.

While this might appeal to people, 5G also appeals to "things," as in the "internet of things." While 4G has a fifty-millisecond delay, or latency, 5G has a one-millisecond delay, which will make communication between machines connected to the internet much easier. If this makes you think of Skynet in the Terminator movies, you're not alone.

For its incredible speed, 5G uses what are called millimeter waves (MMW). These are radio signals having frequencies between 30 GHz and 300 GHz. While these higher-frequency bands have a lot of capacity, their shorter wavelengths mean their range is lower, and they can be easily blocked by buildings, cars, airplanes, and trees.

To get around that problem, 5G requires what are called "small-cell antennas," which must be deployed far more densely than 4G antennas, at roughly every 500 feet, or about one antenna per city block. 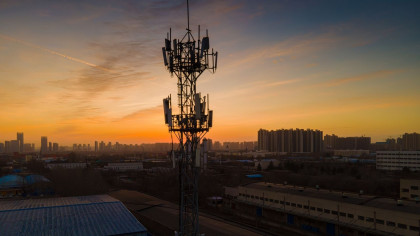 Small-cell antennas are about 4 feet tall, with some as large as a refrigerator. The cell phone operators plan to affix them to streetlights and utility poles, or place them on the ground, sometimes disguised as mailboxes. The City of Portland, Oregon has called these antennas a potential eyesore, especially in historic neighborhoods.

Radio frequency radiation dissipates with distance, obeying the inverse-square law. That makes sources close to you far more dangerous than a source that is farther away. Duration of exposure is also an issue, and the new small-cell antennas will be active 24/7.

The Scientists Weigh In

On June 9, 2017, scientists with the International EMF Scientist Appeal submitted a letter of comment to the U.S. Federal Communications Commission (FCC) in opposition to FCC Docket Numbers 17-79 and 15-180, which would allow streamlined approval of 5G infrastructure to be built on existing utility poles, in greater number than current cellular antennas.

The group is comprised of over 225 reputable scientists from 41 countries who have peer reviewed publications on electromagnetic fields. Their letter calls on "The FCC to critically consider the potential impact of the 5th generation wireless infrastructure on the health and safety of the U.S. population before proceeding to deploy this infrastructure." The letter includes:

"FCC is urging an accelerated deployment schedule for the 5th generation wireless infrastructure, to be installed pervasively throughout the United States. This is being done without public health review of the growing body of scientific evidence that includes reports of increasing rates of cancer and neurological diseases that may be caused by exposure to EMF from wireless sources."

The scientists went on to say: "Numerous recent scientific publications have shown that EMF affects living organisms at levels well below most international and national guidelines." These effects can include an increased cancer risk, genetic damage, structural and functional changes to the reproductive system, learning and memory deficits, and neurological disorders.

5G radiation is similar to the waves used to cook food in your microwave. Because of that, in 2016, Dr. Yael Stein of Jerusalem's Hebrew University sent a letter to the FCC Commissioners, the U.S. Senate Committee on Health, Education, Labor and Pensions, and the U.S. Senate Committee on Commerce, Science, and Transportation, outlining the effect of 5G radiation on human skin.

According to Dr. Stein, over ninety percent of microwave radiation is absorbed by the epidermis and dermis layers of human skin, essentially making it an absorbing sponge for microwave radiation. Also, the sweat ducts in our skin's upper layer act like helical antennas, which are antennas specially designed to respond to electromagnetic fields. In essence, our bodies will conduct 5G radiation, and how this will effect babies, pregnant women, and the elderly is not known.

In fact, the U.S. Department of Defense already has a weapon called the Active Denial System, that uses MMWs to make people's skin feel like it’s stinging or burning. Turned up a notch, this weapon could microwave people to death.

A widely cited U.S. National Toxicology Program study of rats that were exposed to RFR for nine hours a day over a two year period showed that they developed rare forms of tumors in both the brain and heart. This study caused the American Cancer Society to rethink its position on radiation and cancer, and they stated that their current understanding of RFR's impact on human health was similar to their previous lack of understanding the connection between smoking and lung cancer.

U.S. President Donald Trump is all excited about the new 5G cellphone network. Here's what he had to say in prepared remarks:

"5G will be as much as 100 times faster than the current 4G cellular networks. It will transform the way our citizens work, learn, communicate, and travel. It will make American farms more productive, American manufacturing more competitive, and American healthcare better and more accessible. Basically, it covers almost everything, when you get right down to it. Pretty amazing.

And just as 4G networks paved the way for smartphones and all of the exciting breakthroughs — they made possible so many things — this will be more secure and resilient. 5G networks will also create astonishing and really thrilling new opportunities for our people — opportunities that we’ve never even thought we had a possibility of looking at."

In January 2017, Trump appointed Ajit Pai, a former lawyer for Verizon Communications, to the position of Director of the U.S. Federal Communications Commission (FCC). Pai has advocated for the weakening of state and local regulations regarding the deployment of 5G.

For a wider perspective on the history of the cell phone, take a look at this video;

In 2018, another Republican F.C.C. commissioner, Brendan Carr, announced a plan to streamline the environmental review process for 5G infrastructure, claiming it could cut costs for the telecommunications companies by as much as 80%. To bolster their case, Pai and Carr have trotted out words designed to get every red-blooded American going: "keep pace with global competitors," "bring high-speed internet to underserved areas," "close the digital divide."

The telecommunications companies are pushing to build 5G systems as quickly as possible. They have deployed a small army of lobbyists working state legislatures to pass laws that restrict local oversight of 5G. Wireless companies are also lobbying the U.S. Congress, which is considering several bills on the issue.