The Engineering Behind Cleaning an Architectural Icon

One of Malaysia's newest public buildings was an incredible feat of architectural engineering. However, it needed a novel maintenance system to address unique problems.

The Malaysia International Trade and Exhibition Center is one of the most impressive and newest structures in Asia. Its futuristic design is one of the biggest eye-catching features. That unique shape represents a rubber seed, and architects used the shape to pay homage to Malaysia's rubber industry and its contribution to the global economy.

That's all well and good, but there's one major logistical question its designers had to overcome: how would they clean such a structure?

For those challenges, the MITEC turned to MHE Demag, one of the top maintenance systems designers in the area. That design team is comprised of two groups. The first is industrial group Jebsen & Jessen; the second group is Demag Crane and Components, a 45-year-old company that's designed maintenance structures for some of southern Asia's biggest landmarks.

One of the MITEC's most impressive features also became one of the biggest headaches for maintenance engineers. The beautiful aluminum cladding and glass facade don't easily allow for simple cleanup.

Karl Tillkorn serves as regional managing director for the MHE-Demag. He explained the limitations of such a beautiful facility given pre-existing maintenance techniques.

"For the height of MITEC, an Assess Work Platform (also known as Boom Lift) is sufficient for the workers to perform cleaning, maintenance and repair work on the glass façade," he said in a press release. "However, this solution is not workable due to the landscape and the installation of canopy next to the glass façade. The design engineer developed a solution of a 322-meter three-dimensional MHE- Rostek monorail track complete with a Chameleon 1 cradle."

The team developed an invisible track (or 'gondola') system. The entire rig is stored in an "openable" ceiling. This allows the whole system to be lowered down when needed and then raised back up to hiding when maintenance work is done. Ultimately, a well-maintained building ensures long-term use. That goal is what inspired the team with MHE-Demag to innovate the new system.

"Building maintenance is the long-term project. Besides cleaning and maintenance, MHE-Demag has also included a Glass Replacement Unit (or known as GRU hoist) with 300-kilogram lifting capacity that can be used when there is a need to replace broken glasses," Tillkorn said.

MHE-Demag had to work around the stunning creations of architecture and design firm Naza Group.

“The successful completion of MiTEC is a testament that the Naza Group has matured into a formidable player in the industry and sets a perfect example for other bumiputra entrepreneurs who are willing to work hard and be successful,” said Prime Minister Datuk Seri Najib Tun Razak. 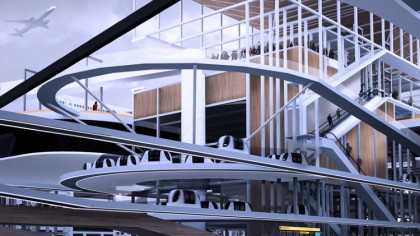 MITEC sits in the heart of the Jalan Duta Government Complex, one of Kuala Lumpur's most highly-trafficked areas. It shares space with the capital's most important national landmarks. For Naza Group's executive chairman SM Nasarudin SM Nasimuddin, the project represents a promising future for Kuala Lumpur's engineering prowess.

"We take pride in the completion of this facility that has proven the Group’s ability to undertake major turnkey infrastructure projects," said Nasarudin.

The pride of Kuala Lumpur's growing metropolis can rest easy knowing that its buildings are being well taken care of.