The "Five Deeps" Expedition and the Challenger Deep

An expedition is set to dive to the five deepest points in the world's oceans, including the Challenger Deep in the Pacific.

In 1872, the Royal Society of London, at the urging of Charles Thomson of the University of Edinburgh, obtained from the Royal Navy a ship called the Challenger. The ship's 17 guns were removed, and she was outfitted with laboratories, extra cabins and a special dredging platform. Then, under Captain George Nares, she set sail on an expedition that would change the world and launch the science of oceanography.

How inappropriate to call this planet Earth when it is quite clearly Ocean.
-- Arthur C. Clarke

The purpose of the Challenger Expedition was to:
1. Investigate the depth, temperature, circulation, specific gravity and penetration of light in the great ocean basins.
2. Determine the chemical composition of seawater at various depths, the organic matter, and particles in suspension.
3. Ascertain the physical and chemical character of deep-sea deposits and the sources of those deposits.
4. Investigate the distribution of organic life at different depths and on the seafloor.

To measure sea depth, the crew lowered ropes with a weight attached. Then, on March 23, 1875, a sounding taken at a location in the southwest Pacific Ocean between Guam and Palau, revealed the astounding depth of 26,850 feet (8,184 meters).

Challenger was at the southern end of the Mariana Trench, the deepest place on earth, and the location henceforth became known as the "Challenger Deep". Modern soundings at that location have put its depth at 36,070 feet (10,994 meters).

Upon her return, the "Report Of The Scientific Results of the Exploring Voyage of H.M.S. Challenger during the years 1873–76" ran to 50 volumes and was almost 30,000 pages long. Marine specimens that were brought back are still being examined today. To honor Challenger, the marine geological survey ship Glomar Challenger and the Space Shuttle Challenger were named after her.

On January 23, 1960, Swiss oceanographer Jacques Piccard and U.S. Navy member Don Walsh descended to the floor of the Mariana Trench on board the bathyscaphe Trieste. They reached a depth of 35,813 feet/10,916 meters, but spent only 20 minutes on the bottom after the cold temperatures at that depth caused a crack in one of the outer window panes.

On March 25, 2012, filmmaker James Cameron (Avatar, Titanic, The Abyss) rode a 2.5-story-tall submersible down 6.8 miles/11 kilometers to the bottom of the Challenger Deep. Cameron spent several hours on the sea floor, collecting samples and recording video. 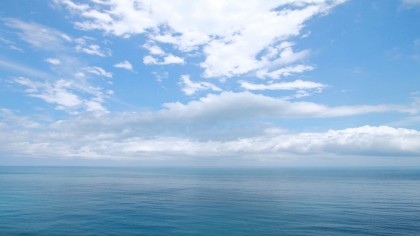 In April 2019, Vescovo is set to dive the Java Trench, and two remaining dives have yet to be scheduled. Along the way, the expedition says they will survey and dive on sites having historical importance or scientific significance.