A very interesting, but rather harmless, exchange occurred this week between the Flat Earth Society and SpaceX CEO Elon Musk on Twitter.

A recent statement about the topography of the planet Mars has come from one of the most unlikely sources: the Flat Earth Society.

It all began a few days ago when SpaceX CEO Elon Musk sent out a very innocent wondering, seemingly aimed at no one, with the question, "Why is there no Flat Mars Society!?" What Musk, and the rest of us, did not expect, however, was the answer that he would receive that same day.

With a response that boggles the mind, yet will no doubt live in infamy as one of the most surprising, and unexpected, exchanges witnessed on Twitter, an official response tweeted from the Flat Earth Society simply reads, “Hi Elon, thanks for the question. Unlike the Earth, Mars has been observed to be round. We hope you have a fantastic day!” 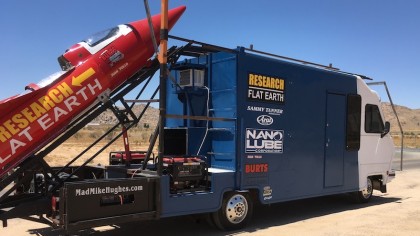 Whether you read the response from the Society as being intentionally vague, a defiant quip aimed at Musk, or simply an attempt at providing a detailed and informed response to what they saw as a normal inquiry, those three simple sentences seem to have put the Society on the map overnight.

A look at the site of the Society reveals some pretty far-fetched theories, all of them aimed at combatting opposing theories based on a spherical Earth model they refer to as “Globularist” (the statement is a catch-22 in itself because the mere fact of saying or writing it somehow gives it legitimacy). Essentially, it’s a repository for all the archives they use in order to try to build a case. Many of their statements seem to generally have a contradictory and vague tone to them, as provided in one of Society President John Davis’ writings in which he show that Einstein’s Relativity Theory can be used a basis for proving his theory about a flat Earth: “...we are not making the ludicrous claim that the Earth is two-dimensional...it can be traversed via a straight line through space...[and] can be said to satisfy this if it can be shown to be parallel to another straight line in space along such traversals.”

Surprisingly the Society holds an annual conference, with this year's event held in the United States in Raleigh, North Carolina. There, YouTuber Mark Sargent shared some strong, though rambling, words about Musk: “I was wondering, people like Elon Musk, who founded the SpaceX program, when they reach, if they actually do produce a rocket capable of reaching the dome so to speak… are they going to strike it and immediately explode, or are they going to hug the edge?”

Still, with Musk’s frequent, and admitted, use of comic and provoking language both in his tweets as well as in terms of the naming conventions for some of SpaceX’s creations, we must attribute some of the blame to him. Ironically, Musk and Davis have two important things in common: they are both on a committed mission to translate their vision into reality despite the voices of naysayers, and most importantly, neither of them shies away from controversy, taking on objectors head on.