Researchers in Germany have finally released their thoughts on two almost ten million-year-old teeth found in the Eppelsheim region.

Scientists in Germany have discovered ancient teeth fossils that are 9.7 million years old, a number that does not fit in with the timeline of human existence.

The weirdest part of this dental mystery is the fact that one of these tooth fossils is similar to the one found in our most primitive ancestor, the hominin. The problem is, the much younger hominin teeth have only ever been found in Africa while this latest discovery originates in Europe. The teeth were located in 2016 near the German town of Epplesheim in what was once a bed of the Rhine River.

Only lately have the researchers decided to publish the findings in a preprint, after a year of confusion regarding the development.

"This is not only the first time something like this has been found here in over 80 years, but it's something completely new, something previously unknown to science," paleontologist Herbert Lutz from the Mainz Natural History Museum in Germany told ResearchGate.

The Eppelsheim region is synonymous with fossil finds, one of the teeth; an upper right first molar is similar to other fossils found in the area. However the other tooth, an upper left canine has an outline and shape comparable with the teeth of an Australopithecus afarensis, a hominin species famously associated with the ancient skeleton called Lucy, whose discovery was responsible for rewriting the story of humanity. Her find filled a significant gap in the development of humankind.

Which is why this recent find is so startling, Lucy was estimated to be 3.2 million years old, significantly younger than the Epplesheim teeth fossils. Additionally, our earliest ancestor’s only began their migration out of Africa and into both Europe and Asia around 100,000 years ago.

So did someone just drop bygone teeth in Germany? Lutz and his team believe that this particular species could be related to younger hominins found in Africa. 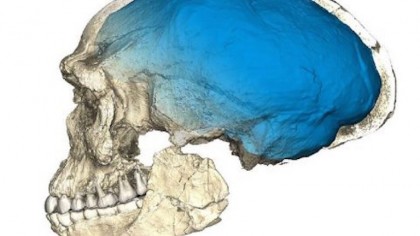 “There’s also the phenomenon of convergence when evolutionary pressure causes the same characteristic to develop in multiple locations. Now the question is whether it’s possible that’s what happened. There are few thousand kilometers between the species in East Africa and here in Central Europe, and millions of years. Is it possible that this uncannily similar characteristic developed two times, completely independently of one another? So here we are, perplexed,” he told ResearchGate.

Investigations into the excavation are still ongoing, and despite the extraordinary aspects of this story, many are doubting its history-altering nature.

"I think this is much ado about nothing," palaeoanthropologist Bence Viola from the University of Toronto in Canada told National Geographic. “The second tooth (the molar), which they say clearly comes from the same individual, is absolutely not a hominin, [and] I would say also not a hominoid."

It’s possible the teeth belonged to a distant group called pliopithecoids, something Lutz and his colleagues acknowledge in their paper. Nothing can be confirmed until the teeth are put through a series of tests which could reveal, age, dietary preferences and whether there is, in fact, a reason to celebrate yet another piece added to the puzzle of our existence.