With global warming causing severe droughts, many countries around the world have no choice but to turn to the sea for their water.

Global warming is causing increased droughts throughout the world, and this has brought some areas to the brink of a water crisis. February 2, 2018, was supposed to be "Day Zero" for Cape Town, South Africa, the day on which the city was set to run out of water. That date was subsequently reset to July 15, 2018, after area fruit growers used up their allotment of water, and through conservation measures.

How Do We Prevent Anarchy?

For many areas, overdevelopment, population growth, and climate change have upset the balance between water usage and supply, and areas from North America to South America, and from Australia to Asia, are increasingly facing threats of drinking-water shortages.

Our "blue marble" is a water planet, with over 70 percent of the earth's surface covered by water. But, the problem is that this water isn't drinkable because it is saturated with salt. To solve that problem, more and more countries are turning to the process of desalination to produce clean drinking water, and water for agriculture and industrial uses.

Desalinating sea water is much more expensive than getting fresh water from rivers or groundwater, water recycling and water conservation, but for many places on earth, desalinating is their only option. You can remove salt in either of two ways: by distillation, or by reverse osmosis. Distillation involves boiling water, then collecting the water vapor. Solar distillation uses the sun to heat sea water until evaporation occurs, then the vapor is condensed onto a cool surface.

In vacuum distillation, atmospheric pressure is reduced, which lowers the temperature required to evaporate water. A basic law of physics is that liquids boil when their vapor pressure equals that of the ambient pressure. Vapor pressure increases with temperature,  and this allows low-temperature "waste" heat from electrical power generation or industrial processes to be used.

In a process called cogeneration, a power plant provides the heat to distill water. Most current and planned cogeneration desalination plants utilize either fossil fuels or nuclear power, and most are located in the Middle East or North Africa. There, the countries can leverage their petroleum resources to offset their limited water resources.

Dual-purpose facilities of power generation and desalination are more efficient in their energy consumption that each is alone, and this makes desalination more viable.

The reverse osmosis desalination process uses an ultra-thin, aromatic polyamide thin-film, but it has a number of maintenance issues. These include ionic contamination from calcium and magnesium, dissolved organic carbon, bacteria, viruses, colloids and insoluble particulates, and scaling.

Seawater Reverse Osmosis Can Be Controversial

Pretreating the intake water can help, but the additives include acid for anti-scaling, the organic polymers polyacrylamide and polymaleic acid, phosphonates and polyphosphates, biocides such as as chlorine, ozone, sodium or calcium hypochlorite. These contaminates are often released back into the ocean and can do serious harm to sensitive marine habitats. 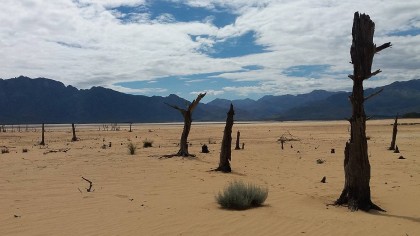 A new desalination technique called a freeze-thaw method freezes seawater in a vacuum, then under vacuum conditions, the desalinated ice is melted and diverted for collection. Two facilities in Western Australia have begun to use CETO, a wave power technology that desalinates seawater using submerged buoys. Wave-powered desalination plants began operating in Australia on Garden Island in 2013 and in Perth in 2015.

At the time of this writing, the following countries have operating desalination plants:

Algeria - 15 plants in operation
Aruba - one of the world's largest with a capacity of 11.1 million gallons/42,000 m3 per day
Australia - 10 plants spurred by the Millennium Drought (1997 - 2009) including smaller scale SWRO (seawater reverse osmosis) plants on offshore islands
Bahrain - three plants
Chile - one plant operating, one proposed that would use a thorium reactor to power a 2,000 litre per day plant
China - one plant, the Beijing Desalination Plant in Tianjin, which is a combined desalination and coal-fired power plant, it has only operated at one-quarter capacity due to problems with local utility companies and an inadequate local infrastructure.
Cyprus - one SWRO plant
Egypt - four plants
Germany - one SWRO plant on the island of Helgoland
Gibraltar - server SWRO and multistage flash plants
Grand Cayman - three plants
Hong Kong - two SWRO plants, and a third located at Tseung Kwan O set to come online in 2020
India - two plants, one near Chennai and another at Nemmeli Iran - several plants using a mix of thermal and reverse osmosis
Israel - eight plants, with the Hadera SWRO plant being the largest seawater desalination plant in the world; in 2015, 50% of Israel's water for households, agriculture and industry was from desalination
Kazakhstan - two plants, one combined with a nuclear plant, and another SWRO
Malta - one plant
Maldives - several plants
Norway - three, all located in the county of Nordland providing water for around 500 people
Oman - eight plants including two forward osmosis plants
Qatar - one plant with plans for an additional two
Pakistan - a plant at Gwadar went online on January 1, 2018
Saudi Arabia - a staggering 32 plants
Singapore - five plants producing 25% of Singapore's 2017 water demand
Spain - 13 plants
South Africa - seven plants
Trinidad and Tobago - one plant
United Arab Emirates - 13 plants
United Kingdom - two plants, one is the Thames Water Desalination Plant, built in 2010 in Beckton, and a second one is near La Rosiere, Corbiere, Jersey
United States - 2,000 desalination plants that each produce more than 300,000 gallons per day.

Texas has around a dozen desalination plants. California has 17 plants, and lays claim to the largest plant in the U.S. with the $1 billion Carlsbad plant located 35 miles north of San Diego. It opened in 2015 and it provides roughly 8 percent of San Diego County's water supply.

Florida has 35 plants, with the Cape Coral plant being the largest low pressure reverse osmosis plant in the world. The problem plagued Tampa Bay plant went online in 2007.

In Arizona, the Yuma plant was created to treat agricultural return flows into the Colorado River. In 2010, an agreement was reached between the Southern Nevada Water Authority, the Metropolitan Water District of Southern California, the Central Arizona Project, and the U.S. Bureau of Reclamation to underwrite the cost of running the plant whose water is also delivered to Mexico.

There is no doubt that as droughts become more frequent, more areas of the world will be forced to turn to desalination to meet their water needs.

Industrial Activity is Draining the World of Fresh Water

The Complex Physics of How Water Flows Through Pipes