The Future Is Back: Check out Nike's Next Self-Lacing Shoe, the Adapt BB

Nike has brought their self lacing technology to basketball with their new Nike Adapt BB sneaker.

Great Scott! They are finally here. Nike has finally released the next generation of self-lacing sneakers.

If your New Year's Resolution centered around getting your hands on a pair of the elusive and highly expensive HyperAdapt sneakers or coveted Nike Mags, the Adapt BB shoes may be the perfect alternative.

The Future is Back

For the uninitiated, the Nike Air Mag is one of the most highly coveted and culturally significant sneakers ever to be created.

Originally appearing in the Back to the Future franchise, the sneaker, and its technology has become ground zero for a lot of modern sneakers including the new Adapt BB.

Designed by Tinker Hatfield, the sneaker promised self -lacing technology that would acquiesce to your foot for the ultimate fit.

However, it wasn't until almost two decades later that the sneaker hit the market, but still was way too expensive for the everyday consumer. 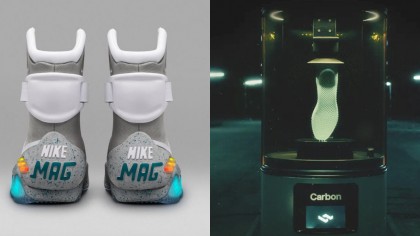 Back to the Future: 9 Technologically Advanced Sneakers

"Getting the right fit from a performance shoe is both personal and complicated. Consider basketball: Over the course of a basketball game, the foot can expand almost a half-size during play."

A level of fit that feels comfortable at one point might feel constrictive just 24 minutes later," says Nike in a press release about the shoe.

The shoe embodies both the present and where the athletic company intends to take the sneaker technology, with the aim of going far beyond just the sport of basketball. The ultimate sneaker for the ultimate athlete.

Though Nike released the Hyperadapt sneakers, with a modern version of the same self-lacing technology, the sneakers still were tough to get and were priced extremely high.

This is what makes the Adapt BB so special. The shoe embodies the same design language and technology that were beloved in these shoes but appropriately updated for the mass market and the modern times.

The technology in Nike's Adapt BB is more than just a novelty and can help take your basketball game to the future.

Their aim was to design a shoe that is aware of a pro athlete's needs, adjusting itself around the athlete's foot in real time, not just for performance purposes, but for foot health, a major issue among long term athletes. This is where the Adapt BB comes into play.

Tested countless hours, the Nike Adapt BB is constantly learning about your foot to keep your foot snug and secure while you perform on the court.

Manually or on your phone, the Nike Adapt BB can be tightened or loosened around your foot thanks to the power laces. A small engine inside the midsole pulls the laces to tighten the Flyknit and quad-axial mesh upper.

As mentioned before, the shoes can be controlled via a smartphone via its FitAdapt technology. You can even use the phone to control the bright lights on the bottom of the shoe for a little flare. The Adapt BB shoes can even be wirelessly charged, with a battery that is expected to last 10-14 days.

The sneaker itself will be available during All-Star Weekend (February 17) for the much more reasonable price of $350. Be sure to get your hands on them before resellers shoot up the price.

So, it seems 2019 may not be all that bad. Hopefully, Nike plans to re-release the Nike Air Mags for those of us who still want to go back to the future. For more on modern sneaker technology, be sure to stop by here.

Nike Is Designing Biodegradable Sneakers Out of Carbon

The Future Is Here: Researchers Figure Out Holograms You Can Feel