With the growth in augmented reality apps and hardware, what does the future of entertainment look like?

“Having survived the initial hype, AR has now entered a practical phase where organizations and consumers are finding valuable use cases and effective approaches. In this phase, it’s natural that adoption is moving slowly but also deliberately,” said John Buzzel, president of YOU ARE HERE, a company built around constructing augmented reality experiences for brands.

It is estimated that by 2026, augmented reality will be an $80-162 billion market. With this much potential, there will be a lot of companies looking to get a piece of it, so much of what we experience today for entertainment will likely see an augmented reality upgrade in the next decade.

Some of the biggest names in augmented reality hardware today are Microsoft, with their substantial investment in their Hololens headset, and Magic Leap, who burst onto the scene with some of the most dramatic demonstrations of the possibilities for augmented reality technology several years ago.

There will be many newer names to pop up as the months and years go by and the technology becomes more sophisticated, but some of the biggest advances in augmented reality won’t require any more sophisticated hardware than your smartphone. There are apps that let you turn your smartphone into a planetarium while looking up at the night sky as well as games like Pokemon Go! and others.

When considering augmented reality vs virtual reality in entertainment, it's important to understand what each one does. Augmented reality apps can be used on your phones, tablets, or other specialized hardware to alter the perception of the world around you, the “augmented” part in augmented reality.

Virtual reality, by contrast, is a different experience altogether. Instead of adding new virtual elements to existing reality like augmented reality does, virtual reality replaces the world with a completely new, virtual world to inhabit.

When it comes to entertainment in augmented reality vs virtual reality, both will enable you to play games, watch movies, and interact socially with friends around the world.

Augmented reality will use elements from the real world and add to them or “replace” them with virtual elements as part of the game, such as the Pokemon standing in a park in Pokemon Go! or how Snapchat filters allow you to add cat ears, dog ears, or any number of other features to your face while recording a video.

Virtual reality meanwhile will immerse you in a new setting, such as a dungeon to explore in a dungeon-crawler video game, or a simulated baseball park or soccer pitch so you can watch a simulated sporting event that tracks the actual event in real time.

What Kind of Augmented Reality Apps for Entertainment Might We See?

There is no real limit to what augmented reality can do to enhance existing forms of entertainment.

Augmented reality apps and hardware will allow film and TV shows to become more immersive in ways that 3D-glasses could only dream of imitating. Augmented reality can be used to bring films entirely off the screen, extending the visual story into the “real world” for the first time ever.

Closer to home, augmented reality could be used as a way to interface with existing media in new and exciting ways. Menus and controls can be integrated into some fairly standard hardware like augmented reality glasses, which could allow control of menus using simple eye-tracking technology that already exists. 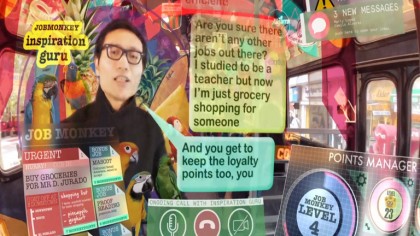 Physical games can add entire layers of complexity, from older card and board games to desktop roleplaying games like Dungeons and Dragons and Warhammer. Augmented reality apps could be made to revitalize older games that hadn’t even been made with such technology in mind, but could nonetheless benefit from augmented reality.

Physical sports can benefit from augmented reality by creating virtual opponents to practice against or it could enhance the enjoyment of more casual outdoor activities like hiking. Watching live sporting events can be enhanced the way it is on TV, with player numbers, stats, time left, and scoring graphics all integrated into augmented reality hardware.