The Future of Ocean Energy Conversion

Know everything about ocean energy conversion and new emerging technologies in the sector.

The ocean energy sector is all about innovation and has been evidence of some remarkable advancements as well as cutting-edge technologies in the last two decades. Oceans are definitely the energy frontiers of the world.

This sector has a lot of potential advantages and elements to address such as their TRL or Technology Readiness Level, their speed of development and the challenges that affect their development.

Humans have forever had the dream of using the permanent movement of oceans as an energy source to power homes as well as cities. Although these dreams might seem far-fetched to some, we are slowly but steadily climbing the right steps to reach that vision.

Ocean energy technologies can perhaps be the ticket to the growth and establishment of a blue economy as well as decarbonization. However, before we can get there, it is essential to address the viability and the commercial possibility of this idea.

Before we get on to two of the most promising ocean energy technologies, let us understand how ocean energy gets converted!

How Is Ocean Energy Converted?

To begin with, the sun’s energy heats the surface of the water in the oceans. The surface water is usually significantly warmer than the deep water in tropical regions.

This temperature difference or thermal gradient can potentially be utilized to generate electricity as well as to desalinate the water of oceans.

OTEC systems power a turbine in order to generate electricity using a temperature difference of not less than 77-degree Fahrenheit. An evaporator pumps the warm surface water that also contains a working fluid.

This vaporized fluid then drives a generator or a turbine and later reverts to the liquid form in a condenser that is cooled with the cold water of the ocean pumped from the deepest parts of the sea.

Some Ocean energy conversion systems also use the saline water of oceans as the working fluid in order to produce desalinated water using condensed water. This renewable energy source contributes significantly to the base-load power supply.

This is precisely how ocean energy is converted to produce electricity.

What Is Tidal Energy and Wave Energy?

Tidal energy is an energy that takes advantage of the rise and fall of the seawater produced by the gravitational action of the sun and the moon to generate electricity cleanly. It is, therefore, a source of renewable and inexhaustible energy that uses the energy of the tides produced in the oceans. 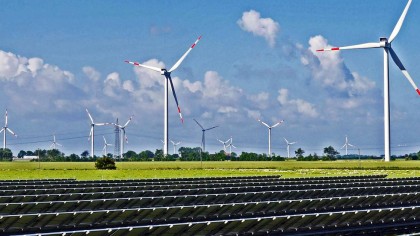 Is Mark Jacobson’s Plan to Use 100% Renewable Energy Feasible?

A central tidal system is based on the storage of water in a reservoir formed to build a dam with compilations that allow the entry of water or flow for the generation of electricity. Also known as a tidal barrage, this system is simple and follows the same principle as the old tide mills.

When the tide rises, the floodgates are opened, and the water is allowed to pass until it reaches its maximum level. Then, the gates are closed to retain it, and it is expected that the sea will go down to the other side, which produces a large gap.

This height is used to pass water through turbines and generate electricity. There are several other technologies as well, through which electricity can be produced from tidal energy, which typically include tidal fences and tidal turbines.

Talking about wave energy, the waves of the sea are not useful only for the surfers. With the appropriate technology, the oscillation of the waves can also be used to produce electricity.

This renewable and, therefore, non-polluting energy is called wave energy.

Wave energy is the energy of the waves, unlike the tidal energy that uses the rise and fall of the tides to produce power. The waves are generated by the effect of the wind on the surface of the seas and oceans and, if we are able to take advantage of them, we can convert them into CO2-free energy.

The Future of Ocean Energy Sector

Tidal energy converters are quickly becoming the face of the ocean energy sector with rapid developments. Floating tidal devices have been created that work without needing any expensive all heavy foundation systems.

In addition to that, tidal energy converters of the third generation can extract energy from the water flow or the tidal flow by the use of kites, sails or by simulating the motion of a fish swimming in the ocean.

Deep Green is one such technology developed by Minesto, a Swedish company that harvests energy produced from tidal streams and ocean currents to produce electricity.

In addition, the MeyGen project, currently the largest planned tidal power plant in the world is already under development. The project’s first phase was recently completed involving the installation of four 1.5 MW turbines on the sea bed.

On the other hand, wave energy has been researched for years. More and more computational tools, as well as testing facilities, have made it possible to research and find new opportunities to create novel wave energy concepts. The rapid advancement in learning algorithms, as well as artificial intelligence, also provides humans with an opportunity to develop more efficient designs.

Penguin, a device developed by a Finnish energy company called Wello is already making waves in the ocean energy sector. The device uses rotational energy from waves to generate power that can be directly transported to the grid through underground cables.

The CETO is another revolutionary technology developed by Australia’s Carnegie Clean Energy that harnesses the energy from the ocean’s waves and converts it into electricity while also produces desalinated water.

There is also Wavestar, a machine that draws energy from wave power with floats that rise and fall with the up and down motion of waves. This motion of the floats is then transferred to the generator to produce electricity.

In addition to these technologies, several other approaches can potentially help us in extracting energy from the oceans and then converting this power into electricity. In the present times, inertia, hydraulic and direct drive systems are much more advanced than they used to be in the past.

Therefore, there is a massive possibility of tapping into these resources to unlock the potential of the ocean energy sector.

If we are to build successful and efficient marine energy systems in the future, we must apply the approach of integrated systems. Moreover, requirements, as well as system capabilities, must also be correctly defined in order to enhance the effectiveness and functionality of emerging technologies.

There also needs to be plenty of transparency where the applications of these ocean energy technologies are concerned. All in all, we can definitely look forward to a better and a more environmental-friendly tomorrow that uses the energy of the oceans to power our houses.