The Future of Skyscrapers: Green Engineering

Throughout history, the most memorable structures have been the grandest and largest. But in a future full of tall buildings, architects will be vying for a new title: the most efficient.

The world's tallest man made structures

Since 2008, the Burj Khalifa has stood as the tallest structure ever created by humans, at an astonishing 828 meters. This noble title has been sought after since ancient civilization, beginning with the construction of the world-renowned pyramids. Since the 1800s, man has triumphed over the forces of nature to reach even further into the heavens with skyscrapers and today, these massive buildings are reaching new heights and shattering records once considered mere science fiction. What new challenges does the future hold for architects and engineers to conquer?

Built in 1930, New York City's Chrysler Building ushered in a new era of architecture. At a height of 319 meters, the designation of "skyscraper" no longer seemed sufficient. Buildings between 300 and 600 meters tall are now referred to as supertall buildings. The Empire State Building famously reached over the world's first supertall building just a year later, and stood as the tallest man-made structure in the world for another 38 years.

The record has been broken many times over in the last century, but only three buildings have surpassed supertall and become a whole new class of structure: the Abraj Al-Bait Clock Tower in Saudi Arabia (601m,) the Shanghai Tower in Shanghai (632m,) and the United Arab Emirates' Burj Khalifa are the first of the world's megatall skyscrapers.

The future of skyscrapers

Cities across the world have experienced explosive growth in the last half-century. With extreme population increases and new and unanticipated travel burdens, environmentalists are beginning to fear the worst. As cities begin to sprawl outwards away from population centers, accessibility to resources and the reliability of transportation infrastructure becomes more expensive and logistically difficult. Soon, cities will have no choice but to rely on architects and engineers to use the space more efficiently. 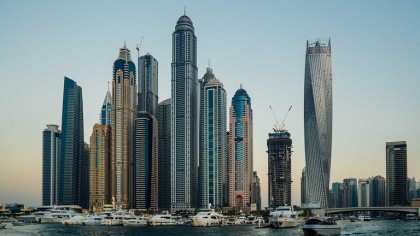 The solution to build up rather than out has made a great deal of sense in places with limited space to expand. New York City and Hong Kong notably have a high density of tall buildings due to confinement. However, many of these buildings were not constructed with their lasting impact on the environment in mind -- in 2011, the Empire State Building underwent a retrofit that reduced its energy burden by more than 35%. But can architects do an even better job if the structure itself is designed to be efficient?

The Chicago-based architecture firm is currently working on several megatall structures in dense population zones. One of the firm's current construction projects -- the Jeddah Tower in Saudi Arabia -- is slated to overtake the Burj Khalifa as the tallest building in the world in 2020. When construction is completed, the Jeddah Tower will be just over a kilometer tall, breaking the decade-long record by over 72 meters.

But the building isn't just tall -- the architects have dedicated themselves to building a new kind of skyscraper: sustainable and efficient. Smith and Gills, the founders of the firm, have devoted their work to creating environmentally sustainable projects that will reduce the burdens of pollution and energy usage these buildings usually create. They call their architectural philosophy Global Environmental Contextualism.

As a philosophy of both art and engineering, Smith and Gills intend to use their work as a platform to create a brighter future without sacrificing the comforts modern society has created. The resulting buildings, such as the Jeddah Tower and the Central Park Tower in New York City, will be "super sustainable," using state of the art engineering techniques to improve energy efficiency and reduce emissions through means such as travel impact, air circulation, and internal climate control.

The design of the tower aims to reduce the upfront material cost of the project as well. New design philosophies have changed the way architects deal with high wind stress in supertall buildings. Through a unique, curved structure, the Pearl Tower in Guangzhou channels wind through a causeway, which not only significantly reduces the wind load on the structure, but also powers a large turbine inside, generating power.

As we move further into the future, more of these super structures will be designed with sustainability and material costs in mind. Some day, the earth will be covered in massive zero-waste buildings that produce their own energy through renewable sources.

The burden created on the environment by the usage of skyscrapers is extremely difficult to overcome. Elevators, lights and computers in a common commercial building can be quite energy consumptive, and the heat and waste generated can be harmful to the immediate environment and the population in the surrounding area. Two centuries ago these concerns were largely ignored by architects and engineers, but today's building codes and environmental regulations require creative and novel solutions to these issues before construction can even begin.

The Shanghai Tower is a shining example of the necessary steps architects must take to produce energy efficient buildings. Completed in 2015, the Shanghai Tower is currently the second tallest building in the world and possesses the highest possible energy rating - LEED Platinum -- despite towering over the Shanghai skyline. The tower uses cutting edge technology and engineering to reduce its environmental impact. Its unique shape and design allow it to effectively resist wind load, which saved 20,000 metric tons of steel reinforcement during its construction. It also boasts a huge reliance on clean, renewable energy, significantly reducing the tower's consumption and emissions. This is a landmark success in China, where pollution and energy consumption have been destructive and alarming for decades.

A world full of highly stylized, efficiently designed buildings such as the Shanghai Tower is also a world with a cleaner, brighter future. The future of the supertall skyscraper will no longer be dominated simply by who can build the tallest building, but instead who can build the best building - the most energy efficient, cleanest, most well designed buildings being built today will be the benchmark for success in the coming decades the same way the Chrysler Building and the Empire State Building were the standard for success a century ago.