The Giant Stratolaunch Plane Hits the Runway for the First Time

The massive Stratolaunch carrier aircraft just completed its first taxi test this weekend. The double-bodied jet has the largest wingspan of any aircraft in the entire world, and its progressions toward getting off the ground continue to make headlines. The company's taxi test marked the first time that the plane moved under its own power.

The video footage below shows part of the testing process as the aircraft fully put to work its six Pratt & Whitney turbofan engines. (Thsoe engines were the culimation of two 747-400s, by the way.)

"This was another exciting milestone for our team and the program. Our crew was able to demonstrate ground directional control with nose gear steering, and our brake systems were exercised successfully on the runway. Our first low speed taxi test is a very important step toward first flight. We are all proud and excited," said George Bugg, aircraft program manager, Stratolaunch Systems Corp in a statement.

The ultimate goal of the project is to normalize access to low-Earth orbit (LEO) that would allow for more organizations looking to either use satellite technology or explore space. The aircraft is estimated to have a range of 2,000 nautical miles, allowing Stratolaunch to deliver payloads to multiple orbits at various places around Earth. 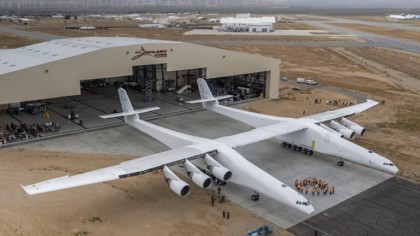 The Stratolaunch group was founded by Microsoft co-founder Paul Allen, and the aircraft itself was designed and built by over 300 engineers and fabricators.

"Opening up access to LEO will deliver many benefits," said Allen. "For example, we could deploy more satellites that would enable a better understanding of why our weather patterns are changing and help increase agricultural productivity. And, we could study atmospheric chemistry more closely to better study and mitigate climate change. But none of this will happen as quickly without exploring new, flexible and streamlined ways to send satellites into orbit."

With testing at the Mojave Air and Space Port continuing on schedule, the company could perform its initial launch demonstration as early as 2019. That hope is something that keeps Paul Allen incredibly optimistic of Stratolaunch's impact on the future.

"As always, space remains an unforgiving frontier, and the skies overhead will surely present obstacles and setbacks that must be overcome," Allen noted. "But hard challenges demand fresh approaches, and I’m optimistic that Stratolaunch will yield transformative benefits – not only for scientists and space entrepreneurs but for all of us."