The Great Mosque of Djenné: The World's Largest Mud-Brick Structure

West Africa is home to a collection of incredible mud-brick mosques. The largest in Djenné dates back to the 13th century.

All over the world places of worship, churches, synagogues, mosques, and temples have provided architects with the opportunity to create buildings of scale, grandeur, and wonder. 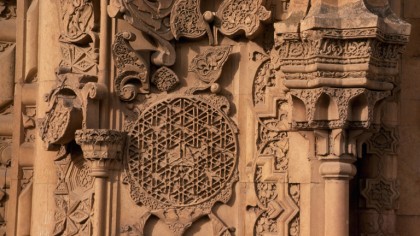 Wherever religion exists there are examples of incredible sacred architecture from the imposing cathedrals of Italy, to the colorful temples of India. Every country and region of the world plays host to varied and unique religious structures.

In West Africa, these structures are often mosques, built from local materials and designed in a unique style that fuses Islamic architecture with local aesthetic and building style. Islam was introduced to West Africa in the 9th century by traders. Most of West Africa is now Islamic.

Mosques are places of worship for Muslims and can be found all over the world. In West Africa, these holy places range from large white buildings to roofless mud enclosures.

The mosques are built using mud bricks and reinforced with large wooden logs that stick out of the building's facade. These extrusions are called 'toron' and serve as both decoration and as a type of scaffolding for workers who are tasked with re-surfacing the mosque each year.

While each mud brick mosque in West Africa is different according to where it is located and who it was built by, they all follow roughly the same design of having a tower, a flat roof, and a courtyard.

Inside the mosque, the sand floor is covered in prayer mats. These large buildings are only lit by light coming in from small windows in the ceiling. The interior of the mosques is kept deliberately simple to avoid distracting the worshippers.

The Great Mosque of Djenné in Mali

The most famous of these mud-brick mosques is the Great Mosque of Djenné in Mali. This huge mosque has only been standing in its current form for only a hundred years but the original mosque, built on the same site is thought to date back to the 13th century.

The original mosque was damaged over the years and eventually used as a graveyard rather than a place of prayer. After the French captured Djenné, they decided to rebuild the mosque. Many argue that this is why the mosque has some distinctly French features.

The mosque is positioned on a large mud platform, lifting the building ten feet higher than the ground level. It is an unusual and imposing building of sandy yellow mud and it's dotted all over with the timber supports.

French journalist Félix Dubois, who saw the mosque soon after it was completed was horrified by the design and suggested it ‘looked like a cross between a hedgehog and a church organ’.

Another visitor to the mosque, American art historian, Jean-Louis Bourgeois thought the mosque was uniquely African and downplayed the French influence on the building design.

The mosque is still in use today but non-Muslim visitors can only view the building from the outside. This restriction on visitors was installed in 1996, after Vogue completed a fashion shoot inside the holy place, causing outrage among local Muslims.