Our cosmic history is pretty straightforward, except when it comes to the origin of the two most abundant things in it.

One of the most puzzling mysteries about the Universe is simply, “where is everything?”

All that we can see, find, or interact with is made up of particles we mostly understand like photons, electrons, quarks, and gluons among others.

Yet when we look out at the greater cosmic ocean around us, we find that all of this makes up just under 5% of the Universe; the rest is unseen. We call the missing components dark energy (68%) and dark matter (27%), but here’s the thing…

We don’t really know what they are.

There are, however, a few abiding theories based on what we DO know about these things. More than that, there is plenty that we can say for sure about these elusive energies thanks to the brilliant combined work of thousands of scientists.

What do we actually know?

There’s so much that we don’t know about dark matter and dark energy, but there are great many things that we can definitively say about them.

We’ve observed that dark energy affects the expansion of the Universe, only becoming prominent and detectable about 6-to-9 billion years ago.

It appears to be the same in all directions as it has a constant energy density throughout time, and doesn’t clump or cluster with matter indicating it’s uniform throughout space.

When we look at how the Universe expands, dark energy is absolutely required, with approximately 68% of the total energy of the Universe presently existing in the form of dark energy.

Dark matter, on the other hand, has shown its effects on the entire 13.8-billion-year history of our Universe. The great cosmic web of structure, from the earliest times to the present day, requires that dark matter to exist in about five times the abundance of normal matter.

Dark matter does clump and cluster, and its effects can be seen in the formation of the earliest quasars, galaxies, and clouds of gas.

Even prior to that, dark matter’s gravitational effects show up in the earliest light from the universe: the cosmic microwave background, or the leftover glow from the Big Bang.

The pattern of imperfections requires that the Universe is made of about 27% dark matter, in comparison to only 5% normal matter. Without it, all that we observe would be impossible to explain.

But does this necessarily mean that dark matter and dark energy were created back at the moment of the Big Bang? Or are there other possibilities?

The difficult thing about the Universe is that we can only see the parts of it that are accessible to us today. When an effect is too small to be seen — such as when other effects are more important — we can only draw inferences, not solid conclusions.

Where the problems lie with Dark Energy:

Effects too small to be seen become particularly problematic for dark energy. As the Universe expands, it dilutes; the volume increases while the total number of particles within it stays the same.

The matter density (both normal and dark) goes down, but the dark energy density remains constant.

Our Universe may be dark energy-dominated today, but this is a relatively recent happenstance. In the past, the Universe was smaller and denser, meaning the matter densities were much higher.

The farther we extrapolate back in time (or size/scale of the Universe), the more difficult it becomes to see and measure dark energy’s effects. 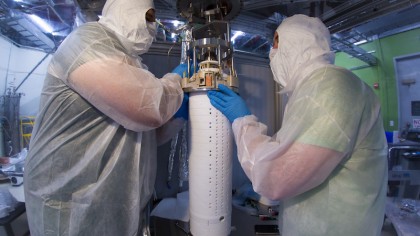 To the best of our ability, it appears that dark energy has an absolutely constant energy density.

We can use the data we have to constrain the dark energy equation of state, parameterized by a quantity known as w. If dark energy is exactly a cosmological constant, then w = -1, exactly, and does not change over time.

This doesn’t necessarily mean that dark energy has always existed with a constant energy density, however. It could change over time, so long as it changes within some observational constraints.

There could be a connection between dark energy and the initial, pre-Big Bang expansion of the Universe known as cosmic inflation, which is the idea behind quintessence fields (a concept so complex we are not going to touch it with a 10-foot pole).

Or dark energy could be an effect which didn’t exist in the earliest stages of the Universe, and only manifested itself much more recently.

We have no evidence that speaks one way or the other on dark energy’s presence or absence for the first 4 billion years or so of the Universe’s history.

We have good reasons to presume it hasn’t changed, but not the observational certainty to back it up. Which has certainly driven more than just a few astrophysicists to the brink of insanity?

The dark reality of Dark Matter:

Unlike Dark Energy, the Dark matter must have existed from practically the very beginning.

The pattern of fluctuations we see in the background radiation is the earliest evidence we have for dark matter in our Universe, dating from approximately 380,000 years after the Big Bang.

Most interestingly, already imprinted in that pattern of peaks-and-valleys is that critical 5-to-1 ratio with normal matter.

Dark matter has not only been providing the seeds of structure, which causes more and more dark matter to fall into the over-dense regions (and be lost from the under-dense regions) but has been doing so since the earliest stages in the Universe.

This doesn’t necessarily mean, however, that dark matter was present at the instant of the Big Bang.

We simply do not know.

Without knowing exactly what dark matter is — including whether or not it’s a particle at all — we can’t say with any certainty exactly when it may have arisen.

But from the measurements of the large-scale structure of the Universe, including the signatures imprinted in the earliest picture of all, we can be absolutely certain that dark matter arose in the very early stages of the Big Bang, and possibly at the very beginning of it all.

Dark energy may have been around the whole time, or it may have only emerged much later. The later seeming much more likely though as there is a substantial exploration of the idea that only when complex structure forms, does dark energy arise and become important in the Universe.

Wait—do we actually know anything?

The great challenge for modern cosmology is to uncover the nature of these missing components of the Universe. If we can do exactly that, we’ll begin to understand when and how dark matter and dark energy arose.

What we can say for certain is that, in the very early stages, radiation was the dominant component of the Universe, with tiny amounts of normal matter always present.

Dark matter may have arisen at the very beginning, or it may have arisen slightly later, but still very early on. Dark energy is presently thought to have always been there, but only became important and detectable when the Universe was already billions of years old.

Determining the rest is a task for our scientific future.