The History and Science of Virtual Reality Headsets

Virtual reality headsets may seem modern to us, but the science, and the history, behind them is centuries old.

You would be forgiven if you thought that the current wave of virtual reality headsets was a modern phenomenon. There were obviously some awkward—and failed—attempts to capitalize on the virtual reality craze of the early 1990s and for most people, this is as far back as virtual reality goes. The truth is that virtual reality is much, much older.

The science behind virtual reality was first explored in a practical sense as far back as the 1800s, but some could argue that it goes all the way back to Leonardo Da Vinci and the first explorations of perspective in paintings of the era. So how do virtual reality headsets work, and how come it took so long for them to become, well, a reality?

The Science Behind the Virtual Reality Headset

A virtual reality headset works because of a physiological concept known as stereopsis. You may not have heard the proper name, but you know about it; this refers to our ability to perceive depth because of the subtle horizontal differences in the image that each eye receives when we look at something.

Close one eye and focus on something with the open eye, now close that eye and open your other one while still looking at the object and you can plainly see the horizontal difference we're talking about.

These two different viewing angles are processed by our brains and relative depth is calculated based on how divergent the images are. If they barely diverge, then we know the object is far away. If they diverge significantly, the object is closer to us.

SEE ALSO: FACEBOOK'S NEW APP 'SPACES' ALLOWS YOU TO HANG OUT WITH YOUR FRIENDS IN VR

Renaissance painters intuitively grasped this as they developed the concept of perspective in their art, and Da Vinci came painfully close to uncovering the physiology that produced depth-perception, but the actual, formal discovery of stereopsis wouldn’t come until the 19th century.

Sir Charles Wheatstone, the English physicist who produced many inventions over the course of his career—most famously the Wheatstone Bridge—was the first person to discover the scientific basis for our ability to perceive depth.

Writing in his work Contributions to the Physiology of Vision, Wheatstone makes the essential discovery that the degree of dissimilarity between the images projected onto the retina is what gives rise to perspective and depth perception.

To demonstrate this, he invented the stereoscope, which recreated a three-dimensional image from two slightly dissimilar perspectives of the same scene. A very popular device in the Victorian era, the stereoscope was the first step towards the modern virtual reality headset.

These headsets, or head-mounted displays (HMD) as they are known, use the exact same principle as Wheatstone’s stereoscope, but instead of a still scene from a penny-dreadful, modern HMDs harness the incredible power of computers to produce entire virtual worlds.

This obviously took a long time to come to fruition, and the road between the stereoscope and virtual reality headsets like the Oculus Rift and the HTC Vive is a long, and bumpy one.

It would take more than a century for virtual reality as we know it to take shape. In 1935, Stanley Weinbaum published Pygmalion's Spectacles, a story in which a man wears a pair of goggles and is transported to a fictional—some might say virtual—reality with holograms and other sensory stimulation.

This is thought by some to be one of the first expressions of the virtual reality concept as we know it today, though the implementation of this vision would still take another couple of decades.

Morton Heilig wasn’t a scientist by trade, he was a cinematographer, but what he created is shocking in its prescience. In 1962, he patented a virtual reality machine he called the Sensorama, and it provided the first virtual reality experience in history. A large, booth-like machine, the Sensorama had enough room for four people and used a variety of technologies to recreate a virtual experience using color 3D video, stereo sound, vibrations, artificial effects like wind, and smell.

Only six films were ever developed for it though, and the idea never took off. It would be a complete commercial failure, but the ideas behind the Sensorama, the total immersiveness of the experience, live on to this day.

Even more remarkable was what Heilig patented just two years earlier in 1960—the Telesphere Mask, an HMD that featured two different television screens to create a 3D moving image.

Heilig’s original patent could easily be mistaken for one filed by a hardware manufacturer today and was the progenitor of all the virtual reality headsets that would come after, though Heilig tragically never found the commercial success that later manufacturers did. The Telesphere Mask was also a bust, and when his widow, Marianne Heilig, tried to donate the original prototype to a museum, they refused to take it, not even for free.

She would later tell TechRadar in a must-read profile of her husband in 2016 that the prototype for the Telesphere Mask is still sitting in a wooden box in her home.

"It's very demoralising," she said. "They'll put on [display] Marilyn Monroe's clothing and shoes, but this is the future, and it started here in 1958. I don't understand the short-sightedness of people."

The Middling Years of VR HMDs

From 1962 onward, the only people to really research and develop virtual reality headsets were government agencies and related contractors, mostly for research, training, and administrative purposes, but these would be important developments nonetheless.

In 1966, Thomas Furness produced the first flight simulator for the US Air Force, jump-starting US Military interest in the development of virtual simulation systems that would prove essential to developing the technology that makes today's virtual reality headsets possible.

In 1968, Ivan Sutherland and Bob Sproull created the Sword of Damocles, the first HMD that interfaced with a computer, rather than a camera. It was an unwieldy contraption, though. It hung from the ceiling and displayed rudimentary graphics in wireframe, so it never got farther than the lab it was built in.

The first company to sell a VR HMD was VPL Research, Inc., founded in 1985 by Jaron Lanier and Thomas Zimmerman. Lanier, incidentally, is credited with coining—or at least popularizing—the term “virtual reality” to describe his company’s products in 1987.

NASA commissioned a VR system to help train their astronauts in 1989, producing a system that came close to a completely immersive experience by incorporating biaural 3D audio processing in real-time.

The Dawn of VR Games

It was in 1990 though that VR games had their first big moment with the introduction of Virtuality, a VR HMD-powered gaming experience for high-end video arcades.

Players sat in a chair, put on the headset, and were treated to the first ever virtual reality games as we know them. The graphics were anything but realistic, but for the time, it was revolutionary and millions of players around the world got their first taste of VR games through Virtuality.

Others tried to capitalize on the craze, most importantly SEGA and Nintendo, but the SEGA VR Headset for the SEGA Genesis in 1993 and Nintendo’s Virtual Boy in 1995 failed to gain any traction with the public for various reasons, mostly because the hardware just wasn't capable of providing the kind of VR experience they were promised.

With the death of the Virtual Boy in the late 1990s, the dream of accessible VR games seemed to wither with it, apparently for good. It would be another 17 years before people would stand up and take notice of a VR gaming device, but when they did, the excitement was palpable.

Kickstarting The Latest Revolution in VR

After a surprisingly successful Kickstarter campaign in 2012, Palmer Luckey and the Oculus Rift offered discerning PC gamers something they had forgotten they’d wanted all along. Just as modern computer systems reached the level where they could bring real graphics processing power to PC gaming through high-end graphics cars, the Oculus Rift and later competitors like the HTC Vive could finally deliver on the potential of VR gaming.

With the power to render two different, high-resolution images in real-time that could be fed into a VR HMD, modern graphics cards could finally be harnessed by VR HMDs to provide gamers the kind of gaming experience they'd been promised for years. 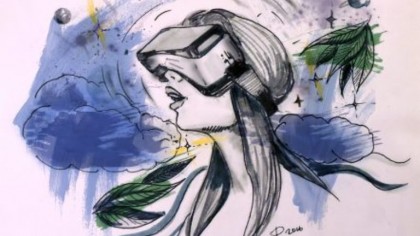 Gamers responded by throwing their money at Luckey and Oculus, making the Kickstarter campaign for the Oculus Rift one of the most successful ever, raising $2.4 million.

Later, Facebook would buy Oculus for $2 billion and the modern era of virtual reality experiences, not just VR games, kicked into high gear.

Google and Samsung created Google Cardboard and the Samsung Gear VR, which turned your smartphone into a VR device, making VR even more accessible to the masses, and with the introduction of the Oculus Go and other wireless VR HMDs, VR's moment seems to have finally arrived.

We’ve come a long way from Wheatstone’s stereoscope, but the modern virtual reality headset has finally reached the technological maturity to match its decades of promise, giving all of us entirely new virtual worlds to explore that Heilig and Wheatstone could only dream of.