Our kitchens would not be the same without the help of these appliances. Learn about the history behind these amazing machines.

Modern kitchens are outfitted with an enormous amount of technology. Much of this tech represents the combined efforts of countless inventors, engineers, and scientists across the centuries.

Without the following appliances, our kitchens would be far less efficient and safe than they are today.

1. The Refrigerator: From Early Vapor-Compression Experiments to Freon

Experiments in refrigerating technology date back to the late 18th and early 19th Centuries. The first successful attempts at creating a refrigerator were based on the idea of vapor-compression. It was in 1805 that American inventor Oliver Evans suggested a refrigeration device that would operate via vapor-compression, creating ice by placing ether within a vacuum. 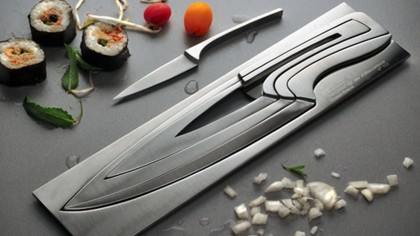 It was not until 1914 that the first electric refrigerator for domestic use was designed by Nathaniel B. Wales. This design would become the basis for the Kelvinator refrigerator. Many other manufacturers followed suit, designing and building refrigerators. These early machines required motors and compressors to be installed within the home in order to operate.

However, due to their use of ammonia, sulfur dioxide, and methyl chloride in the cooling process, these refrigerators had the potential to be very dangerous. When the fridges leaked, the released chemicals could prove fatal. So, in the 1920s leading manufacturers of refrigerators Frigidaire, General Motors, and DuPont joined together to create Freon - a safer refrigerant which is non-toxic.

2. The Electric Stove: An Easier, Cleaner Way to Cook

William Hadaway successfully filed a patent for an electric stove in 1896. It took some time for the electric stove to become popular, as many towns and villages did not yet have electricity.

The configuration for most conventional electric stoves today dates back to 1906, when David Curle Smith applied for a patent for the Kalgoorlie Stove. The proposed device featured a stove made up of electrical hotplates, positioned over a grill and oven.

By the late 1920s, electric stoves had become fierce competition for their gas-powered counterparts. Many consumers were attracted to the newly available electric versions thanks to their ease of use and low maintenance.

3. The Electric Oven: The Creation of Combination Electric Stoves and Ovens

The invention of the electric oven goes hand-in-hand with that of the electric stove. Though their technologies differ, both were - and still are - sold as a unit when they hit the market.

Electric ovens operate through the use of two heated elements - one above and one below. A fan assists the circulation of heat created by the elements.

The creation of the microwave oven was actually the byproduct of experiments involving radar. In 1945 Dr. Percy Spencer noticed that the chocolate bar in his pocket melted when he was researching active combat radar.

Spencer deduced that the heat generated by microwave-producing magnetrons could be utilized in cooking. He filed a patent for the first microwave oven through his employer, Raytheon.

The first commercially available microwave hit the market in 1947 and was called the Radarange. It measured almost 6 feet (1.8 meters) tall and weighed roughly 750 lbs (340 kg).

Microwaves continued to shrink in size, but the device was slow to gain popularity as many people feared the ill-effects of radiation.

The history of domestic freezers follows that of the refrigerator to a large degree. Both technologies operated using the same method of vapor-compression in order to lower temperature.

The first commercial freezers for home use were designed in the 1940s. By this stage fridges and freezers were using Freon, making the technology far safer than previous iterations.

It wasn't until after the Second World War that freezers were widely manufactured and sold. Today most fridges and freezers are sold as a single unit, allowing consumers to preserve food both short-term and long-term.

6. The Dishwasher: Invented By An American Socialite

The first designs for dishwashers appeared in the mid-19th Century, created by Joel Houghton and L.A. Alexander, respectively. Both designs were of hand-cranked wooden devices, and neither of them were particularly efficient or practical.

In 1887, Josephine Cochrane invented a device that could wash her dishes faster than her servants could, while protecting her china from breaking. It included wire compartments for plates and cups which were housed within a copper boiler, and a motor that spun the boiler while it filled with soapy water.

Cochrane's invention was shown at the 1893 Chicago World's Fair, and she would go on to found KitchenAid - a company that would manufacture her washing machines. Despite this, dishwashers would not become popular household appliances until the 1950s.

7. The Garbage Disposal: A Staple of American Kitchens

Considerably more common in the United States than elsewhere in the world, the first garbage disposal unit was invented in 1927 by John W. Hammes. He received a patent for his device in 1935, and founded his manufacturing company InSinkErator in 1940.

The idea behind the garbage disposal was simple - food scraps were inefficiently disposed of, and something needed to change. When burned in incinerators, food waste used more energy than it generated. It seemed more efficient to Hammes to liquidize the waste and have it disposed of through pre-existing infrastructures, like sewage systems.

Initially, there were strict prohibitions on the release of food waste into the sewage system, and Hammes was an instrumental force in renegotiating these prohibitions with local governments. Today, 50% of American homes have a garbage disposal unit.

8. The Blender: From Mixed Drinks to Medicines

The first blender was invented to aid in the creation of milkshakes and malts. Invented by Stephen Poplawski in 1922, the design featured a container fitted with a spinning blade, connected to a motor.

Competing designs included the Waring Blender, created in 1937 by Fred Osius and funded by Fred Waring. The Waring Blender would go on to become a vital piece of medical equipment, aiding Dr. Jonas Salk in his creation of a polio vaccine.

9. The Electric Kettle: The Technology of Teatime

In 1893, Crompton and Co. released the first electric kettle in England. Though because of the technological constraints of the time, the kettle's heated element could not be submerged in water. The element was instead housed in a compartment below the kettle, which unfortunately made the electric kettle less practical than its traditional stove-top counterparts.

By 1922 engineer Leslie Large had solved the issue, by creating an element consisting of wire wound around a core and sheathed within a metal casing.

The first automatic kettle would follow in 1955, created by Russell Hobbs. This kettle featured a thermostat which would flex when the water came to a boil, cutting off the current and effectively switching off the kettle. This same technology is used in modern day kettles.

10. The Electric Mixer: Baking Made Simple

While the first patents for electric egg-beaters, whisks, and mixers appeared in the 1850s, it wasn't until 1908 that Herbert Johnson invented the first electric stand-mixer. He was inspired by watching a baker mixing dough with a metal spoon, and set to work on creating one of the most iconic home baking appliances still available today.

Early iterations of the device were used primarily in industrial bakeries. In 1919 Johnson successfully released his stand mixer under the name "Kitchen Aid Food Preparer".

11. The Pressure Cooker: An Appliance from the 17th Century

The history of the pressure cooker dates back to 1679, when French physicist Denis Papin invented the "steam digester". The digester was an airtight container that utilized steam pressure to speed up the cooking time of food.

In 1924 the first recipe book for pressure cookers was published, written by José Alix. By 1938 the Flex-Seal Speed Cooker, the first pressure cooker intended for home use, was invented by Alfred Vischer.

12. The Toaster: Making Breakfast Simple Since 1926

In 1893, Alan MacMasters invented the first electric toaster. Prior to this, bread had been toasted by placing slices in a toasting frame and heating it over a flame or on a grill.

The first pop-up toaster did not appear until 1919, invented by Charles Strite. Strite's design was intended for restaurant use, but in 1926 it was released to the public under the name Toastmaster.

Funnily enough, the Toastmaster didn't truly take off until the 1930s, when pre-sliced bread finally became the norm in most grocery stores and bakeries.

13. The Slow Cooker: Inspired By A Mother's Story

Inspired by a story his mother told him of a slow-cooking traditional Jewish stew, Irving Naxon applied for a patent for a slow-cooker in 1936. He was awarded the patent in 1940, and went on to sell his design to Rival Manufacturing.

In the 1970s, Rival Manufacturing released the first commercial electric slow-cooker - the Crock Pot. The device's biggest selling point was that it allowed mothers to work, while the evening meal cooked slowly throughout the day unsupervised.

Today the brand name Crock Pot is synonymous with slow-cooking, and the device remains a popular appliance in homes around the world.

Coffee has been around for centuries, across a variety of cultures. Little is known for certain about the earliest origins of making coffee, though it is suggested that the first coffee percolator appeared in 1818.

The first patents for an ice machine were awarded to John Gorrie in 1851. This was followed by Alexander Twining's patent for an icemaker in 1853. Twining would also go on to establish the first artificial methods of producing ice.

It wasn't until 1929, however, that the first machine capable of producing edible ice was invented. It was invented by Professor Jurgen Hans, who founded a company for the production of commercial ice machines (and later air conditioning units) in 1932.

Here's how to make the perfect outdoor BBQ or kitchen