New research has revealed that ultrahot Jupiter KELT-9b contains iron and titanium vapors in its atmosphere created by the exoplanet's exorbitantly high temperatures.

The solar systems beyond ours are rich with diverse celestial bodies that we are just starting to explore. From cloud-free gas giants to planets resembling hell, the constant discoveries made by astronomers never cease to amaze.

So hot it vaporizes metal!

Just last week, a NASA study found that some of these objects have temperatures so high they exhibit starlike atmospheres that tear water molecules apart. This week's research discovered that one such ultrahot planet, the one currently considered the hottest of the bunch, goes even beyond that, featuring temperatures that literally vaporize metal.

The new study refers to ultrahot Jupiter KELT-9b, a giant gas exoplanet orbiting a star located 650 light years from Earth. KELT-9b is a planet that is 30 times closer to its star than Earth is to the Sun.

NCCR PlanetS researchers affiliated with the University of Bern undertook a theoretical study on KELT-9b's atmosphere, since it is way too hot and far for a physical study, and produced some incredible findings. “The results of these simulations show that most of the molecules found there should be in atomic form, because the bonds that hold them together are broken by collisions between particles that occur at these extremely high temperatures”, explained Kevin Heng, a professor at the UNIBE.

More impressively, the simulations indicated that the planet held atmospheric gaseous atomic iron that could be observed using current telescopes. So, the UNIGE FOUR ACES1 team, part of NCCR PlanetS, deployed the HARPS-North spectrograph, an instrument that separates light into a frequency spectrum, to observe KELT-9b during a planetary transit. 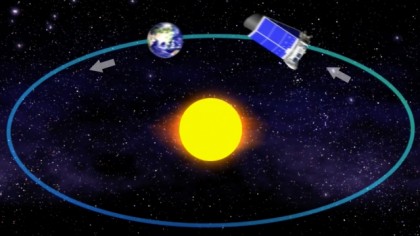 Amongst many components, iron vapor, in particular, exhibits a distinctly recognizable fingerprint in a planet's spectrographic frequency spectrum. As predicted by the simulations guiding the astronomers' work, UNIGE FOUR ACES1 indeed discovered a strong iron vapor signal and even spotted an unexpected vaporized metal, titanium.

“With the theoretical predictions in hand, it was like following a treasure map,” said Jens Hoeijmakers, a researcher at the Universities of Geneva and Bern and lead author of the study, “and when we dug deeper into the data, we found even more.”

The discovery was published in the journal Nature.