Why are some road markings white and others are yellow? Every driver needs to know the different meanings of these common road markings.

If you've ever spent a long journey in a car, you've probably noticed the surface markings on the road as you pass by. Depending on where you are in the world, there can be a huge variety of road markings - both in term of colors and patterns.

So what do all these markings mean? And are they really all that necessary?

Here are just some of the most common road markings you're likely to see while you drive, along with their meanings and history. There's a lot more to these lines than meets the eye, and paying attention to them is crucial when it comes to practicing road safety.

A Brief History of Road Markings and Their Designs

Painted white road lines date back to 1918 in the United Kingdom, but the practice of marking roads wasn't standardized until 1926. At this time, white lines were painted at intersections and junctions to indicate that drivers had to stop.

By the 1940s white lines were being used to separate lanes of traffic, splitting the road down the middle.

Yellow lines weren't introduced until the 1950s, and were designed to communicate restrictions on parking, waiting, and loading.

Today, many road markings are not actually made of paint, but are instead thermoplastic which is applied while hot. Thermoplastic is more durable than paint, and won't fade as much from being driven over for several years. Thermoplastics can also be cut to size ahead of application, drastically decreasing the time and labor needed in marking a road.

The Most Common Road Markings: White or Yellow? Broken or Solid?

The most universally common road markings are usually white or yellow, and vary between solid lines, broken lines, or a combination of both. Here's a quick run-down of what they mean.

If you see a solid white line in the middle of the road, it means that changing lanes or over-taking the car in front of you is prohibited. Stick to your own lane until the lines change.

A broken white line down the middle of the road indicates that you're permitted to change lanes or overtake the car ahead of you, provided it is safe to do so. Always check your mirrors and oncoming traffic before attempting to change lanes.

Pay attention to the placement of solid yellow lines. A yellow line adjacent to a curb means that parking is not permitted. In certain countries a solid yellow line in the middle of the road operates much the way a solid white line would, communicating that it is not advised to change lanes or overtake the car in front of you.

A double yellow line in the middle of the road typically means that overtaking or changing lanes is dangerous and not advised, regardless of which side of the road you are driving on.

While white and yellow lines are the most common road markings worldwide, they're far from the only ones. During your travels you might come across blue, red, and green markings too. But don't be daunted, their meanings are just as straight-forward as those of their white and yellow counterparts.

Depending on where you are in the world, blue lines can have completely different meanings.

On New Zealand coastlines, blue lines usually indicate the major evacuation zones in case of a tsunami. When a large earthquake hits, residents are advised to move beyond the nearest blue line, taking them safely inland and out of the tsunami's reach.

In many parts of the UK, solid red lines operate similarly to solid yellow lines. When placed along the side of the road they indicate that parking and stopping are not permitted. However, if you are a taxi driver or a blue badge holder these rules do not apply.

Green lines could likely become the norm in the Netherlands in the near future. Dutch engineering firm Heijmans created green, bioluminescent road markings in collaboration with artist Daan Roosegaarde.

The paint they've developed absorbs light throughout the day, and can glow bright and green for up to 8 hours at night. This innovation could save energy by decreasing the need for streetlights on major roads.

Are We Safer With or Without Road Markings?

There have been recent studies and campaigns to remove road markings altogether. Naturally, the proposal has stirred up plenty of controversy, but research suggests that the removal of road signs could result in greater road safety. 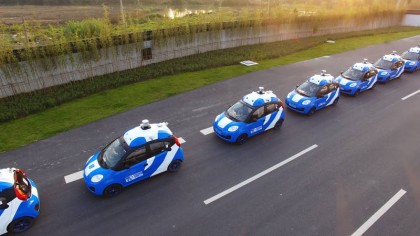 Research conducted by Transport for London noted that average speeds decreased by up to 13% in the absence of road markings. They concluded that without road markings, drivers are more cautious and regulate their speeds more effectively than they otherwise would. Taking their cue from the British capital, Norfolk is now also considering removing markings in an effort to promote safer driving.

While still in the research stages, perhaps road markings could someday be a thing of the past. Until then, keep an eye out and take note of the markings ahead of you. Remember the differences between solid and broken, yellow and white, and drive safely!

How Dams Are Reshaping the World for the Better and Worse