The Invention and History of the Printing Press

The history of the printing press is a fascinating one and is one that ultimately led to our modern world.

The printing press is one of the most important inventions of all time. Its development would destroy the hegemonic control of information in Europe and change the course of history forever.

The quick, cheap and easy distribution of information would ultimately lead to the Protestant Reformation (more on this later), the Renaissance, the Scientific Enlightenment, and Industrial Revolution.

What does the printing press do and why is so important?

It was an enormous improvement on previous methodologies, like transcribing by hand using a 'pen' and ink or brushing and rubbing repeatedly to achieve ink transfer.

They have historically been used primarily for texts, but not exclusively, and its invention revolutionized bookmaking and distribution around the world.  As the prices of book production fell, less wealthy members of society could suddenly gain access to this exclusive and rare luxury item.

Where was the printing press invented?

When someone mentions the printing press most will instinctively think of Johannes Guttenberg and his revolution 15th Century (1440 AD) technology.

Whilst his invention was revolutionary in its own right it wasn't in fact, the first printing press to be developed. Not by a long shot.

In fact, the history of the printing press stretches back to the 3rd Century (the technique of woodblock printing but on textiles) with its adaptation for printing text in wide use during the Tang Dynasty of China (6th-10th Century AD).

Despite this fact, Guttenberg rightfully deserves his place in history for producing a machine that allowed for the mass-production of books for the first time in history.

Before his invention books were transcribed by hand or 'printed' using wooden blocks. Both were a painstakingly slow and laborious process that effectively meant access to the printed word was limited to those who could afford their high price tags.

Did the Chinese invent the printing press?

More than 600 years before Guttenberg's press, Chinese monks were printing ink on paper using block printing. It was a very simple process and used carved wooden blocks to press ink onto sheets of paper.

Forgotten for centuries an example text from the time, The Diamond Sutra (that was created in around 868 AD), was discovered inside a cave near Dunhuang, China in 1907 by explorer Sir Marc Aurel Stein.

Its discovery, in a single step, completely rewrote what we thought we knew about the development of the printing press.

This text is now housed at the British Library in London and is described them as "the earliest complete survival of a dated printed book".

The same process appears to have been prevalent in Japan and Korea at the same time too. These early printed books were made using either wooden or metal blocks and were primarily focussed on Buddhist and Taoist treaties.

The process was heavily improved in the 11th Century when a Chinese peasant, Bi (Pi) Sheng, developed a form of early movable type. Although little else is known about Si (Pi), his ingenious method of producing hundreds of individual characters was a huge stepping-stone on the path to the modern printing press.

The ability for Buddhist and Taoist texts to be printed quickly and in large volumes was very important for the Chinese (and surrounding nations). This, in no small part, helped spread Buddhism around the region.

And we might not know about this man if it wasn't for a contemporary scholar and scientist named Shen Kuo. He documented Sheng's movable type in his work "Dream Pool Essays" and explained that the moveable print was formed from backed clay.

Kuo also tells his readers about the type of ink used (pine resin, wax and paper ash) and he also explains how it was a fairly efficient, and quick, method of copying documents.

Despite this advancement, it would take a few centuries for it to be widely adopted across China. Other forms were developed in the 14th Century by Wang Zhen (A Chinese government official) during the Yuan Dynasty.

Why did Gutenberg invent the printing press?

Despite the progress of printing press development in China, it didn't catch on as quickly as it did in Europe. This is thought to be a consequence of the complexities of Asian writing systems when compared to the more concise, alphabetical script used in Western languages.

It should be noted that relatively primitive forms of the printing press did exist in Europe in the late 14th and early 15th Centuries. These were ostensibly the same as Chinese woodblock printing, known as xylography, and were used in much the same way as those techniques used for The Diamond Sutra.

But one German Goldsmith and Craftsman in Strasbourg was about to change the world. Initially experimenting with existing xylographic methods he hit upon an idea to make the process much more efficient (and profitable).

What makes Gutenberg's press stand out from its predecessors was his integration of mechanization for transferring ink from movable type to paper. He adapted the screw mechanism from wine presses, papermakers' presses and linen presses to develop a system perfectly suited from printing.

His device enabled the establishment of an early form of assembly-line production of printed text allowing for the mass-production of books at a much cheaper cost than contemporary methods.

As for his intentions behind developing the printing press, no one knows for sure but making money is a likely incentive. His first production books were the now famous Gutenberg Bible. Over 200 are thought to have been printed but only 22 survive to the modern day.

Few records exist from this time about Gutenberg but his invention is first recorded in a lawsuit testimony from a former financial backer, Johan Fust, over repayment. This testimony describes his type, inventory of metals and types of molds and the case would ultimately be lost by Gutenberg and his press was seized by Furst as collateral.

What is the impact of the printing press and how did it change the world?

The impact of the printing press is, almost, impossible to really quantify. On the surface it allowed for the much more rapid spread of accurate information but, more elusively, it had an enormous impact on the nations and population in Europe at large.

Thanks, in no small part to the press, literacy began to rise as well as the types of information people could be exposed to.

Around this time Europe was recovering from the devastating impact of the Black Death. This had decimated the population and had led to the decline in the rise of the church, the rise of the money economy, and subsequent birth of the Renaissance.

On the back of this, the printing press was 'in the right place at the right time' to help in the secularisation of Western culture. Of course, many early texts were of a religious nature but more and more were beginning to be more secular in nature.

Science was able to flourish at this time with early scientists suddenly being offered an incredible tool to collaborate with each other around the continent.

It also ripped absolute control of the contents of religious texts from the hands of the church. No longer would it be possible to centrally control and censor what was written on topics of the Christian, and other, faiths.

By the 1600's the Scientific Revolution of the Enlightenment was in full force, which would radically alter how Europeans viewed the world and universe forever. A process of thinking that would ultimately culminate in the Industrial Revolution - Thank you, Gutenberg et al!

Why was the printing press important to the Reformation?

As we have seen the printing press had an enormous impact on the distribution of information around Europe after its invention by Gutenberg in 1448. The technology, and printed texts, quickly spread around Europe at this time.

It is no coincidence that was also a time of enormous change in cultural and religious change across the continent. These would ultimately change the course of Europe's history and culminate in the Protestant Reformation.

Never before had intellectual and religious leaders had a means of spreading their teachings beyond a limited congregation at any one time. Martin Luther, the founder of the Protestant movement, would quickly take advantage of this.

According to Mark U. Edwards (Harvard Divinity School), the printing press provided a means to "shape and channel mass movement [in ideas]". Simply put without the printing press it is unclear whether the Reformation would ever have occurred.

Between 1500 and 1530, Martin Luther produced literally hundreds of pamphlets in German - a total of 20% of all pamphlets produced at the time.

By using the printing press in this manner the Catholic church lost it hegemonic control of written materials and, more importantly, made it near impossible for them to halt the spread of 'heretical ideas'.

This is important for many reasons but ultimately it can be seen as an enormous shift in political thinking that would forge the later technological and societal development of the nations of Europe. It was, to borrow a phrase, "a really big deal".

What was the first book printed on the printing press?

The first books to ever be printed on Gutenberg's press was his, now famed, Gutenberg Bible. These became incredibly popular and a total of 200 copies were produced in short order.

In fact, they were so popular that many were sold long before they had actually been printed.

The contents of his bible were based on the versions currently circulating around the Rhine area of Germany between the 14th and 15th centuries. His version would become the de facto standard version for bibles thereafter and would form the template for all future biblical texts.

How did the printing press change Europe and the world?

The printing press would ultimately lead to some major reforms across the continent. The rapid production and easy spread of standardized texts would provide thinkers (religious, scientific or otherwise) a means of mass-producing texts and spreading them with relative ease. 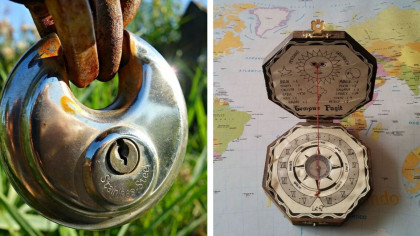 35 Inventions That Changed the World

With its creation books could be mass-produced on a scale that hand-written texts simply could not compete with in terms of volume and price.

Printing presses would dramatically reduce the cost of book production and, with easier access to texts, consequently dramatically increase the literacy rates of Europe's citizens.

It also laid the foundations for facilitated research and scientific publishing, which birthed the Renaissance movement. The importance of this cannot be underestimated for the history and development of Europe and the world at large.

The printing press demolished centralized control and censorship of published materials and allowed new ideas to literally 'spread like wildfire' in a manner never seen before.

It also led to new professions and trades being developed from printers becoming artisans to proofreading and, arguably graphic design, to name but a few becoming wholly new occupations. Occupations that still exist to the modern day.

The modern world would be a very different place without Gutenberg and his printing press.