The Most Distinct Looking Plane "BelugaXL" Took Its First Flight

On July 19th, the BelugaXL took off for its maiden flight from Toulouse Airport in France. The test flight was a huge success, giving the green light for further development of the Beluga series. The team believes that the BelugaXL will be fully operational and open for service by mid-2019.

The name Beluga represents a species of white whales and if you see the aircraft; it literally looks like a whale that can fly! This is the reason why this giant plane is nicknamed “the whale of the sky.”

The front of BelugaXL is painted with a smiling whale face which adds a distinct appeal. The aircraft also has an extra bubble section which gives it a unique appearance and a stark resemblance to Beluga whale.

Getting into the specs and the engineering, Airbus chose the structure of a whale considering the aerodynamics. Basically, the engineers wanted to create a shape that would easily glide through the dense air around it.

To put it in simple language, the air resistance increases with an increase in the speed of a moving object. So the faster an object moves, the harder it gets to move through the air.

The engineers at Airbus got inspiration from a whale because of the relative ease with which it moves underwater even while weighing tons and having a large body. Hence, they incorporated the whale’s body structure and ran aerodynamic simulations.

Result? A cargo aircraft that has a maximum takeoff weight of 227 tons that can carry 53 tons off the ground with ease!

BelugaXL is not the first cargo aircraft from Airbus as it was preceded by Beluga ST. The BelugaXL has 30% more payload capacity than the regular Beluga ST.

Airbus believes that the BelugaXL will completely replace the whole Beluga ST line by 2025. When it comes to the overall dimensions of the BelugaXL, the massive aircraft is 63.1m-long and 18.9m-high with a wingspan of 60.3m.

Powering this mammoth of an aircraft, or should we say “whale” of an aircraft is the Rolls Royce Trent 700 turbofan engines. These beasts cost about £530 million each and can create 316 KN of thrust. 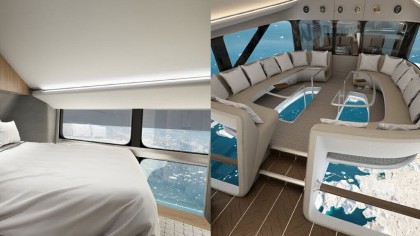 It is not surprising that a machine of this scale will need that kind of horsepower to take it off the ground. Even though the BelugaXL seems like it needs a whole fleet of pilots to control it, the aircraft only need 3 pilots to keep it safe in the air.

The vision of BelugaXL first had its inception in 2014 and went to the developmental stage in 2015. The whole aircraft is not assembled at just one spot; the assembly lines for the BelugaXL spans across Toulouse, France, and Hamburg, Germany.

The giant airplane is yet to undergo 600 hours of flight test before entering into the actual service. Airbus plans to build five such aircraft by 2023 which will operate from 11 different destinations to transport oversized aircraft components.

Via: Airbus, The Sun

The Reason Why Most Non-Military Planes Are White