The Mysteries of the Giza Plateau

Evidence pointing to the Great Sphinx having been built 12,000 plus years ago raises the questions of who built it, and why.

Over the years, travellers to Egypt had reported finding a curious object in the desert near the pyramids. It was essentially a giant head partially buried in the sand.

RELATED: FASCINATING FACTS ABOUT THE GREAT SPHINX OF GIZA AND HOW IT WAS BUILT

Coming to be called the Great Sphinx, the statue was attributed to the Pharaoh Khafre (2,558 – 2,532 BC) because it lay near to the funerary complex surrounding the Second Pyramid, which was built by Khafre. But, the Sphinx's true origins remained a mystery, and like all good mysteries, it became a "who-dun-it", a "why-dun-it" and a "when-dun-it".

One afternoon, the Egyptian Pharaoh-to-be Thutmose IV (1401–1391 or 1397–1388 BC) was taking a walk along the Giza Plateau, home to the pyramids and the Great Sphinx. While the term "sphinx" refers to any ancient Egyptian statue featuring the body of a lion and the head of a man, the Great Sphinx refers to the colossal statue on the Giza plateau.

The heat and sun made Thutmose sleepy, and he took a nap in front of Great Sphinx, which at that time, was buried up to its shoulders in sand. Thutmose had a dream, and in it, the Great Sphinx spoke to him, begging him to unearth it from all that sand. Upon awakening, Thutmose vowed to set the Great Sphinx free, and once he became Pharaoh, he bade his workers to start digging.

Once the Sphinx was completely uncovered, Thutmose placed between its great paws a granite slab on which was inscribed the following:

"...  Look upon me, contemplate me, O my son Thothmose; I am thy father, Harmakhis-Khopri-Ra-Tum; I bestow upon thee the sovereignty over my domain, the supremacy over the living ... Behold my actual condition that thou mayest protect all my perfect limbs. The sand of the desert whereon I am laid has covered me. Save me, causing all that is in my heart to be executed."

This slab came to be known as the Dream Stele, and it confirms that to Thutmose, the Great Sphinx was just as ancient as Thurmose is to those living today. The English Egyptologist E. A. Wallis Budge agreed, saying, "This marvelous object [the Great Sphinx] was in existence in the days of Khafre, or Khephren, and it is probable that it is a very great deal older than his reign and that it dates from the end of the archaic period [c. 2,686 BC]."

The Sphinx By the Numbers

As long as a city block, and as high as a six-story building, the Great Sphinx is perfectly oriented facing due east. 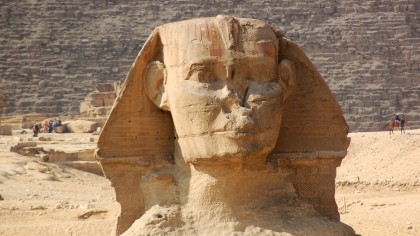 In 1992, the American scholar John Anthony West (1932 - 2018) observed that the sides of the Sphinx showed a type of erosion different from that caused by sand and wind. The type of erosion West observed was caused by prolonged and extensive exposure to rainfall, but that area of the Sahara Desert has been dry for millennia.

West's hypothesis was taken up by Robert M. Schoch, a geologist and associate professor of natural science at the College of General Studies at Boston University. Schoch traveled to Egypt and examined the erosion at the Great Sphinx. He presented his findings at the 1992 convention of the Geological Society of America.

West and Schock reasoned that if the sides of the Sphinx were eroded by water, then the Sphinx must have been carved at a time when the the Sahara was wet. Geological records showed that the last time the Sahara was wet was around 10,500 years ago. Since ancient Egyptian civilization was thought to have only begun around 3,150 B.C., that raised the question – who carved the Great Sphinx?

In 2000, University of Chicago paleontologist Paul Sereno was on the hunt for his usual prey – dinosaurs. He was looking in Egypt's west desert, in an area that came to be called Gobero, when he and his team stumbled upon not dinosaur bones, but human ones. And, the bones showed particular weathering from water.

Sereno carbon dated the bones to a time when the Sahara Desert had been green, a period dating from 10,000 to 5,000 years ago. Prior to that, from 16,000 to 9,700 years ago, the area had undergone a dry period, and sand dunes had formed. As the climate became wetter, water collected in the depressions between dunes and lakes formed.

Some of the sand dunes extended out into the middle of the newly-formed lakes, and these became prime beach front real estate. 9,700 years ago, they were snapped up by a people called the Kiffian who settled onto the upper layers of the sand dunes, fished in the lakes, and hunted the animals that were attracted by the fresh water.

In a cemetery, Sereno found scores of tall and robust Kiffian skeletons. He also found their spears, which were tipped with tiny bladelets called microliths, and the harpoons they used to fish. Their pottery was decorated with characteristic parallel wavy lines.

In southeastern Turkey, in an area called Gobekli Tepe lies a tell or hill, that is of extraordinary height: 15 m (49 ft), with a diameter of 300 m (980 ft). Gobekli Tepe was first discovered in 1963, but it wasn't excavated until 1996 by German archaeologist Klaus Schmidt.

Gobekli Tepe contains more than 200 pillars arranged in approximately 20 circles. Each pillar is around 6 m (20 ft) high and weighs up to 10 tons, and each is precisely fitted into a socket that was hewn out of the bedrock. Gobekli Tepe dates to between 10,000 and 8,000 BC.

With the discoveries at Gobero and Gobekli Tepe, we've established the "who-dun-it," that there were people living around the Giza Plateau 10,000 years ago, and their technology was surprisingly sophisticated. That leaves the "when-" and "why-dun-it" questions, and for that, we've got to learn a little astronomy.

The Plane of the Ecliptic

Every day, the earth rotates once on its axis and every year, the earth completes one revolution around the sun. The imaginary path the earth takes around the sun is called the ecliptic. Around the plane of the ecliptic, lie the twelve constellations of the zodiac: Aries, Taurus, Gemini, Cancer, Leo, Virgo, Libra, Scorpius, Sagittarius, Capricornus, Aquarius and Pisces. Their spacing is surprisingly even.

The axis around which the earth spins each day is tipped 23.5 degrees from the perpendicular to the plane of the ecliptic. Earth's two celestial poles, the north and the south pole, point into space. Today, the north celestial pole points almost directly toward a star in the constellation Ursa Minor called Polaris, and it has become known as the north star. Currently, there is no bright star to mark the south celestial pole.

The gravitational pull exerted by the sun and the moon on the earth causes the earth to wobble as it spins. Picture what happens when a spinning top begins to slow. This wobble causes the north celestial pole to trace out a circle in the sky, a circle that takes 25,772 years to complete. And, that means that the north star changes.

"The Age of Aquarius"

This wobble causes what's called the precession of the equinoxes. The two equinoxes, the spring and the fall, or the vernal and autumnal equinoxes, occur on March 20th and September 23rd, respectively. They are the two points along earth's orbit around the sun where day and night are of equal length, and on those days, the sun rises directly in the east and sets directly in the west.

While all four dates were important, the most important was the vernal equinox. The ancients came to realize that the zodiacal constellation within which the sun appeared to rise at dawn on the morning of the vernal equinox was not permanent, but appeared to move, albeit very slowly, among all twelve zodiacal constellations. Moving in a clockwise direction, the cycle took 25,920 years to return to its original position.

Before the "Age of Aquarius" it was the "Age of Pisces," the fish, and it began around the time of Christ. To this day, the symbol associated with Christ is the fish. During the first and second millennia BC, on the vernal equinox, the sun rose in the constellation of Aries, the ram. In one context or another, rams appear in almost every book of the Old Testament, while they are not mentioned in a single book of the New Testament.

The immediate predecessor to the "Age of Aries" was the "Age of Taurus", the bull. It spanned the period between 4,380 and 2,200 BC, and during that time, the Bull-cult of Minoan Crete flourished, and the Egyptians were venerating the Apis and Mnevis Bulls.

The "When-" and "Why-Dun-It" Questions

Look at pictures of the Great Sphinx and you'll soon notice that the Sphinx's head appears too small for its body. Later sphinx, some of which appear in the Cairo Museum, have far more proportional heads and bodies.

John West contended that it is highly likely that the Great Sphinx originally had the head of a lion, which was re-carved into the head of the Pharaoh Khafre, builder of the Second Pyramid. The Great Sphinx faces precisely eastward. Between the years 10,970 BC and 8,810 BC, on the vernal equinox, the sun rose against the background of the constellation Leo, the lion.

According to writers such as Graham Hancock, the Great Sphinx was an equinoctial marker, with its gaze directed precisely at the point of sunrise on the vernal equinox. Another example of an astronomical marker is the prehistoric monument Stonehenge, located on the Salisbury Plain in Wiltshire, England. Stonehenge dates to between 3,000 BC and 2,000 BC, and on the summer solstice, the sun rises directly behind the Heel Stone, and its rays shine into the monument.

Another astronomical marker is in the remote west desert of Utah. In 1976, artist Nancy Holt created the Sun Tunnels which consists of four large concrete tubes (18 ft in diameter and 68 ft long), laid out so that on the winter solstice, the sun appears through two of the tunnels, and on the summer solstice, it appears through the other two.  Another example of the Egyptians' homage to celestial events is the Temple of Abu Simbel, which was designed so that only twice a year, on February 21 and October 21, the sun shines directly into the sanctuary and illuminates the statues of Ramesses and the god Amun.

In November,  1993, a documentary about the theories of West and Schoch appeared on American television. Entitled Mystery of the Sphinx, it was narrated by Charlton Heston. In 2008, the film 10,000 BC showed an imagined Sphinx with its original lion's head.

Regardless of when and why the Great Sphinx was built, or who built it, it continues to fascinate us even today. Around the turn of the 20th Century, American travelogue writer John Lawson Stoddard wrote:

"It is the antiquity of the Sphinx which thrills us ... Yet grand in its loneliness, – veiled in the mystery of unnamed ages, – the relic of Egyptian antiquity stands solemn and silent in the presence of the awful desert – symbol of eternity. Here it disputes with Time the empire of the past; forever gazing on and on into a future which will still be distant when we, like all who have preceded us and looked upon its face, have lived our little lives and disappeared."