The Mysterious Disappearance of Nikola Tesla's Files After His Death

Nikola Tesla, had all of his possessions and files confiscated by the U.S. Government after his death, what happened to them?

Nikola Tesla was one of the greatest inventors and visionaries of all time. At the time of his death, the U.S. Government took possession of all his possessions to stop them from falling into enemy hands.

Little is really known what this great man was working on just before his death. But, given the significance of his earlier work, you can forgive the authorities at the time for trying to keep them a state secret until they were reviewed.

Much of his work was later released into the public domain but, curiously, some of the material appears to be lost...

How did Nikola Tesla die?

This is actually more of an interesting question that it first seems. Although he was of advanced age at his time of death, his final end might have been caused by an earlier incident in his life.

In the autumn of 1937, Tesla left the Hotel New Yorker to make his regular commute to the Cathedral and library. Whilst crossing the street he was hit by a taxicab and thrown to the ground.

The incident severely damaged his back and broke three of his ribs. But, as he never consulted a doctor, the full extent of his injuries are, to this day, unknown.

Given his age, 81, at the time, he never really recovered and the accident must have affected his psychology and confidence.

Tesla was already a very solitary individual who spent most of his life shying away from society. He was much happier with his own company rather than large crowds and spent most of his time in his workshop or his own imagination.

Nikola Tesla had become a recluse in his later years

Following the accident, Nikola Tesla spent more and more time on his own in his room, Room 3327, 33rd Floor, at the Hotel New Yorker. According to the staff at the hotel, he rarely received guests and had special vegetarian-style meals prepared for him daily by the chef.

When he did permit staff into his room he always asked them to remain at least three feet away (91 centimeters) from him. His fate, it seemed, was in his own hands.

The great Nikola Tesla, perfector of AC, inventor of the Tesla coil and all-around visionary inventor and futurist, would die just as he had chosen to live his life - alone.

Nikola Tesla was found dead in his hotel room bed by hotel staff on January the 8th 1943. It was later established that he'd died at approximately 10:45 pm on the 7th.

The maid in question, Alice Monaghan, immediately called a physician who examined Nikola and pronounced him dead shortly after. It was quickly discovered that the cause of death was most likely coronary thrombosis.

This is caused by a blood clot in the blood vessels of the heart restricting blood flow and ultimately leading to heart failure. It is usually associated with atherosclerosis, or build up of cholesterol and fats on blood vessel walls.

Coronary thrombosis is usually the result of a high LDL cholesterol diet, smoking, sedentary lifestyle, and hypertension. Tesla rarely drank tea or coffee, stopped smoking in his 20s, and clearly had low cholesterol and fatty diet towards the end of his life.

He also had an interesting dietary strategy, as revealed in a  fascinating 1935 interview during his life. Within it, he also reveals his love for exercise and its importance on a healthy body and mind.

Clearly, the earlier taxi accident had a profound impact on the old man's last years. A sad and ignoble end to one of the world's greatest visionaries.

What was Nikola Tesla working on when he died?

Nikola Tesla's ideas became more and more fantastical towards the end of his life. One famous example was his announcement of inventing a "Death Ray" on his seventy-eighth birthday.

He also started to show signs of obsessive-compulsive disorder in his waning years. For example, he became particularly obsessed with the number three.

He would often walk around a block three times before entering a building. At meal times he would request a stack of three-folded napkins to be placed beside his plate during meal times as well.

And, as we have previously mentioned, he would ask staff to stand at least three feet away (91 centimeters) from him at all times. OCD was not very well understood at the time and was considered a form of madness.

By the time he was 81, Tesla had completed a Dynamic Theory of Gravity. Whilst he had announced that the theory had "worked out all the details", he never published it.

From what was announced by Tesla, it seemed to attempt to explain gravity by using electrodynamics consisting of transverse waves and longitudinal waves.

This was reminiscent of Mach's principle and in 1925 Tesla publically stated: "There is no thing endowed with life - from man, who is enslaving the elements, to the nimblest creature - in all this world that does not sway in its turn. Whenever [an] action is born from force, though it be infinitesimal, the cosmic balance is upset and the universal motion results." - 1925.

He was also famously critical of Einstein's work on Relativity. Tesla was adamant that it was deeply flawed and was mainly supported by metaphysicists rather than scientists.

"I hold that space cannot be curved, for the simple reason that it can have no properties. It might as well be said that God has properties. He has not, but only attributes and these are of our own making. Of properties, we can only speak when dealing with matter filling the space. To say that in the presence of large bodies space becomes curved is equivalent to stating that something can act upon nothing. I, for one, refuse to subscribe to such a view.." - 1932, New York Herald Tribune.

Just before he died, Tesla appears to have been working on some form of teleforce weapon. The famous so-called "Death Ray."

This was an idea he seemed to become obsessed with and, on his eighty-fourth birthday, he announced he was almost ready to unveil his idea to the U.S. Government. He believed it could be used to build an invisible Chinese Wall of defense around the country.

This appeared to be related to his previous work on ball lightning and plasma.

By the time of this death, Tesla, now partially 'house-bound' at The New Yorker Hotel, had sold his AC electricity patents. Despite this, he was effectively destitute and would die with significant debts.

What happened to Tesla's papers after he died?

Immediately following the announcement of the great man's death, the U.S. Government moved quickly to acquire Tesla's papers. The FBI instructed the Office of Alien Property to immediately take possession of all that remained of his property and possessions.

Because of the apparent nature of Tesla's work,  J. Edgar Hoover Director of FBI declared it "most secret". In the U.S. Government's view, it was vitally important to get hold of them before any foreign powers, especially the Soviet Union, could.

Shortly after an electrical engineer, Dr. John G. Trump (yes it is current President Donal Trump's uncle) was assigned to review his papers to discover if any of it was of actual tangible value.

He determined that it was "primarily of a speculative, philosophical and promotional character” and said the papers did “not include new sound, workable principles or methods for realizing such results.”

Tesla's extended family, including his nephew Sava Kosanovic, tried desperately to have at least his personal effects returned. Their requests were eventually accepted and some of his personal items were returned to the family.

Recently declassified documents reveal that the FBI, at the time, were concerned with his nephew's intentions. They had even considered arresting him to prevent Tesla's work falling into enemy hands.

After a long court battle, Kosanovic, the rightful heir to his uncle's belongings, was finally given them. Tesla's possessions and files were sent to Belgrade.

But, interestingly, of the 80 trunks or so of Tesla's effects, only 60 arrived in Belgrade. Whether the U.S. Government had kept some of the information and effects or not is still, today, unknown.

This had led to multiple conspiracy theories springing up about the whereabouts of the missing material. But after years of fielding questions on the matter, the FBI finally declassified some 250 pages of Tesla's captured works in 2016.

Yet despite this, it still seems some of his material is still missing. It is known that the U.S. Miltary had attempted to develop Tesla's ideas on particle-beam technology in the post-war years. 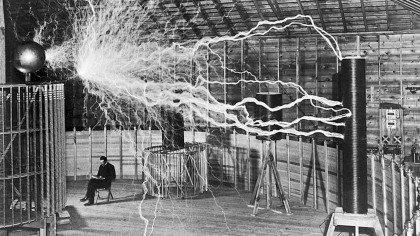 It is also believed that Ronald Reagan's "Star Wars" Strategic Defense Initiative program in the 1980s was probably inspired by Tesla's "Death Ray". But if the government is still using some of Tesla's material for its Research and Development, this would explain why some, if any, of his original works, are still missing today.

Of course, we will never know for sure.

All of Nikola Tesla's returned personal possessions and papers are now housed in the Nikola Tesla Museum in Belgrade.