Airbus completed a maiden test of its new ultra-long haul plane this week.

The latest aircraft of Airbus can stretch long-haul flights to 20 hours. The aerospace company just completed flights of the ultra-long-range A350-900 XWB which can reach a massive 20 hours of flight time before needing to refuel.

In its maiden test flight, the plane took off from the company’s headquarters in Toulouse, performed a short flight over France before landing again at its base. Singapore Airlines is reportedly planning to use them on a route between Singapore and New York.

The 19-hour trip will break the record of the longest available commercial flight that is currently held by Qatar Airways on the 18-hour nonstop flight between Doha and Auckland, New Zealand. The A350-900 XWB is able to manage the lengthy flight due to total fuel re-design as well as additional aerodynamic adjustments.

Its modified fuel system increases fuel carrying capacity by 24,000 liters, without the need for additional fuel tanks. It is powered by Rolls-Royce Trent XWB engines.

The standard plane will have a range capability to 9,700 nautical miles. In addition to being powerful, the new plane is also efficient, its high-tech engines give a 25 percent reduction in fuel burn and emissions, and plane owners will enjoy significantly lower maintenance costs.

Although 20 hours on a plane sounds like hell to many, the latest Airbus features the quietest twin-aisle cabin and new air systems. Despite the plane only just starting to undergo test flights, Airbus has confirmed that it has recorded a total of 854 firm orders for the A350 XWB from 45 customers worldwide.

This sale confidence confirms the Airbus as one of the most successful widebody aircraft ever. Singapore Airlines is the most loyal customer to Airbus, according to the statement released in conjunction with the test flight, it has ordered a total of 67 A350-900s, including the seven Ultra Long Range models.

The carrier has already taken delivery of 21 A350-900s. Global travel is a hotly contested area. Elon Musk and Richard Branson both have ideas about rocket-powered point to point travel.

Environmentally conscious thinkers are suggesting reducing the amount of air travel might be necessary. No matter how we travel, there is no doubt the demand for travel is high. 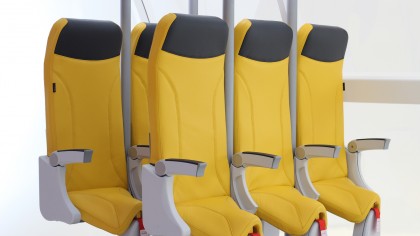 These Standing-Up Airplane Seats Are Designed to Make Flying Cheaper

According to research by Oxford Economics, "international tourists now account for more than 1 billion travel arrivals and $1 trillion in spending abroad. Over the next 10 years, the growth in travel spending is broadly expected to outpace the global economy."

While super-long-haul flights are becoming real with the advent of the new Airbus, other airlines are looking to make short flights even cheaper with the introduction of standing seats. At the recent AIX 18 conference Italian design company Aviointeriors displayed a seating arrangement for planes that sees passengers perching rather than seating in an effort to fit even more people inside an aircraft.