Electric trucks are the latest thing in the electric vehicle (EV) sector, with the loudest noise being made by Tesla with its Tesla Semi.

Electric trucks are not a new development in the automotive sector by any means. However, the sector is under constant pressure for the development of new, cleaner, vehicles in order to reduce air pollution and fight climate change.

Initially, these vehicles are being introduced for short range roles, for example as refuse collection and parcels delivery. However, manufacturers are also investigating their potential for use on longer routes, as the charging infrastructure, and battery technology, evolves and improves.

What are the main benefits of electric trucks?

“Battery-electric trucks are zero-emissions vehicles” says Dakota Semler, CEO and co-founder of Thor Trucks, speaking to Trucking Info website. “Emissions standard compliance numbers always adjust upwards and get harder to meet with each new round of regulations, but for every electric truck an OEM produces, they get emissions credits that allow them to market and sell more conventional diesel trucks as well.”

The electric truck doesn't, yet, have the same range as its conventional diesel and gasoline counterpart. Neither can it be ‘refuelled’, i.e. recharged, as quickly.

Furthermore, the charging infrastructure in many countries around the world is still very much in its infancy. A further problem is that current battery systems are still pretty heavy and take up a lot of room on board a vehicle chassis.

One of the main challenges in this new sector will be maintenance and operation. New maintenance procedures will have to be learned.

Operators will also soon discover that they won't be able to operate an electric truck in quite the same way as a diesel or gasoline vehicle. However, there is growing confidence that these vehicles will soon prove themselves following their initial introduction. 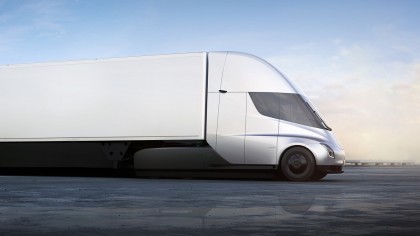 Currently, the introduction of electric trucks in the US is being driven by new, looming, regulation. The Federal Government is introducing new heavy-duty fuel economy standards which will become law in 2025.

These regulations will see truck manufacturers rated on the overall fuel efficiency standards of their vehicle portfolios. Those manufacturers who fail these standards will have to pay a noncompliance penalty. Additionally, cities and states across the US are also introducing their own local regulations.

Nevertheless, according to John Gerra, director of business development for electric truck maker BYD Motors, transport operators and consumers are increasingly enthusiastic about electrification. BYD intends on using electric trucks in the refuse truck role in Seattle next year.

A key factor will be innovation in battery technology and improved endurance. Overall, costs are already falling rapidly, and will continue to do so.

As with electric cars, range anxiety remains a problem. Conventionally fuelled trucks can travel over one thousand miles before it runs out of gas. There is no way that an electric truck will be able to match that performance quite yet.

The eCascadia, for example, can only travel 250 miles, while the eM2 drops down to 230 and the Daimler Fuso eCanter 100 miles or less. For this reason, electric trucks are currently being considered only for short-range roles.

The refuse truck is one such example. Refuse trucks typically operate on a 'stop-go' basis, which is ideal for electric trucks fitted with regenerative braking. China is seeing high rates of adoption for this role and electric refuse trucks are also starting to become popular in the US and Europe.

The advantages are clear when you consider that diesel or petroleum refuse trucks are far less efficient than electric models. They are also far more polluting. In the US, the New York City Sanitation Department is to start an evaluation of electric refuse trucks next year.

The city is under pressure to clean up its refuse vehicle fleet, under the Mayors OneNYC plan. The aim is to put New York in a leading position with regard to transport-related emissions reduction.

Under the NYC Clean Fleet programme, the City will introduce the largest municipal EV fleet in the US. It aims to cut greenhouse gas emissions from its vehicles by 50 percent by 2025, and by 80 percent by 2035. New York is expecting other cities and states in the US to follow its example.

An example of one of the new electric refuse trucks entering service is the Motiv All-Electric Powertrain, produced by Motiv Power Systems. This vehicle, introduced earlier this year, is powered by battery packs of up to 212 kWh in capacity. It can operate all day on a single charge.

Another role is the builder's yard 'terminal truck', typically used for maneuvering goods around builders yards, railway sidings and goods yards and similar spaces. Orange EV has produced the T-series electric truck for this purpose. It has already entered service with a number of municipalities across the US in this role.

Another suitable role for electric trucks is the delivery vehicle. UPS is currently collaborating with Unique Electric Solutions LLC to develop new technology for currently conventionally fuelled vehicles so that they can be converted into electric package delivery trucks.

What’s so good about the Tesla Semi?

The Tesla Semi is a Class 8 semi-trailer truck that was unveiled in November last year which Tesla is expecting to go into full production in 2019. Tesla CEO Elon Musk has announced that it will have an estimated range of about 500 miles (805 kilometers) on a full charge.

The company is also marketing the Tesla Semi as the “safest, most comfortable truck ever”. The Tesla Semi will have a number of interesting features:

- 60 miles per hour while negotiating a slope with a 5 percent incline.

- An Enhanced Autopilot designed to reduce the risk of collisions.

- A central driving position for maximum visibility and control

- A low center of gravity to help protect the vehicle from the risk of rollover.

Tesla believes the energy costs of the Semi will be half those of conventional diesel trucks. This is largely down to the reduced number of systems on the vehicle requiring maintenance. Tesla estimates this will provide in excess of $200,000 in fuel savings thereby enabling a two-year payback period.

Many companies around the world have already placed pre-orders for the Semi. These include a large number of food and beverage companies, such as PepsiCo, Sysco and Loblaw.

As Dr. Gerhard Nowak, Jens Maluck, Christoph Stürmer and Jan Pasemann make clear in an article written for the Strategy& website, 'digitised trucking' will be ideal for food delivery conducted on the ‘hub-and-spoke’ model in which trucks deliver goods over short routes.

The Tesla Semi will be ideally suited to this role which will provide an entry point by which electric trucks can enter the wider transport market. This will be assisted by dedicated charging infrastructure and the benefits of pollution reduction in urban environments.

Electric trucks are ideal for this because they can reduce idling by vehicles, which typically results in greater pollution as the engine is kept running. With an electric delivery truck, any power needed while unloading can be drawn directly from the vehicle’s battery pack.

Tesla is already operating a Tesla Semi prototype. It is already on the road in the US - traveling around the country visiting those customers who have already reserved vehicles prior to its official launch. Its range of advantages have rapidly become apparent, having made several journeys of about 500-600 miles and on one occasion, driven 2,000 miles from its home base, using the Supercharger network.

Eventually, though it will utilize the Tesla ‘Megacharger’, a high capacity charging system that was also announced by Tesla in November 2017. Around 450 Semis had been pre-ordered by January.

Watch a Volkswagen Ram Into This Scania Electric Truck