The Nuclear Lab No One Knows About

In the high desert of Eastern Idaho lies a nuclear lab that few people know about.

When the U.S. entered World War II, it needed a place to perform maintenance on the Navy's most powerful turreted guns that was safely away from prying eyes. It chose a remote spot in the high desert of Eastern Idaho, near the town of Idaho Falls.

By 1949, the U.S. was locked in the cold war with the Soviet Union, and that location morphed into the Idaho National Laboratory, whose missions were the development of civilian and defense nuclear reactor technologies, and management of spent nuclear fuel.

The Birthplace of Nuclear Submarines

Over the years, 52 nuclear reactors have been built at INL for testing by various organizations. Most of those reactors were first-of-a-kind prototypes. Today, only three reactors remain in operation there, including the Advanced Test Reactor, to which nuclear researchers come from all over the world to test reactor materials and fuels.

SEE ALSO: NUCLEAR MELTDOWN: WHAT WOULD HAPPEN IN THE WORST CASE SCENARIO?

Also created at INL were the nuclear propulsion systems used on U.S. nuclear submarines. Sailors and officers were trained there on how to operate those systems. Today, INL is the U.S.'s leading nuclear energy research laboratory, while also conducting research on alternative energy and cybersecurity.

One ton of natural uranium can produce more than 40 million kilowatt-hours of electricity, and is the equivalent of burning 16,000 tons of coal or 80,000 barrels of oil.

But EBR-1 had another purpose besides generating electricity. It was also the world's first breeder reactor, and the first to use plutonium fuel to generate electricity. EBR-1 proved Enrico Fermi's fuel breeding principle, which showed that a nuclear reactor could create more nuclear fuel as a by-product than it consumed, due to fast-moving neutrons converting non-fissionable uranium into fissionable plutonium.

EBR-1 wasn't deactivated until 1964, when it was replaced by EBR-2. In 1965, EBR-1 was declared a National Historic Landmark, and in 2004, it was declared an IEEE Milestone. Today, visitors can view EBR-1 from late May until early September.

Soon, safety concerns were raised about breeder reactors. A breeder reactor using similar technology to EBR-1 that was built above the San Fernando Valley in California, experienced fuel core damage in 1959, and is believed to have released radioactive iodine into the air.

Only one breeder reactor ever went into commercial operation in the U.S., the Enrico Fermi 1, built near Detroit, Michigan. It suffered a partial core meltdown in 1966, and construction of a breeder reactor on the Clinch River in Tennessee was stopped in 1983.

Reactor operators could control the nuclear reaction by raising or lowering five control rods. When lowered between the plates, the control rods absorbed enough neutrons to stop the chain reaction. On the night of January 3, 1961, after two years of successful operation,SL-1 was being brought back online after its annual Christmas shutdown. 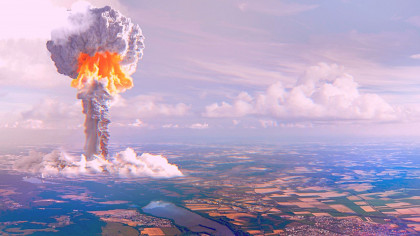 Three men were working in the containment vessel, one on top of the reactor and two at its side. Then, the man on top raised a main control rod several inches too far and it took only four milliseconds, (four thousandths of a second), before the core superheated and vaporized its surrounding water. Steam and water shot upwards, and the reactor itself rose up nine feet, before hitting the ceiling. Pinned between the ceiling and the reactor was the body of the man who had been on top of the reactor.

The facility's fire department responded, but upon entering the control room, their radiation detectors maxed out. They quickly consulted health physicists who told them no one was to spend more than a minute inside the facility at a time. The firemen were able to remove the body of one of the men who had been at the side of the reactor, and they removed the third man, who was barely breathing, and placed him in an ambulance. He died later that night, and the ambulance was driven out to a remote site in the desert, and the man's body was covered with lead blankets.

All three men were interred in lead-lined coffins, and one is interred at Arlington National Cemetery, making his the only lead-lined coffin there. Since that accident, the ability to manipulate control rods has been entrusted solely to computers.

Idaho National Laboratory has been the site of numerous releases of radioactivity. As recently as April 2018, a 55-gallon barrel of "radioactive sludge" ruptured while being prepared for transport to the Waste Isolation Pilot Plant in Southeast New Mexico for permanent storage.

That barrel was part of the badly-documented radioactive waste taken from the now shuttered Rocky Flats Plant near Denver. It is unknown how many such barrels are stored at the Idaho National Laboratory, or what each barrel contains.

The U.S. Navy has been sending in its spent fuel from nuclear-powered ships to INL, and the lab is dealing with tons of waste containing artificial elements, so-called transuranic waste. The U.S. Energy Department promised to transfer an average of 2,000 cubic meters to a special dump in New Mexico, but it has missed that goal for several years because of an underground explosion at the dump.