The Pythagorean cup looks like an ordinary cup, but it has one very fundamental distinction. There is a column in the middle of the cup which serves the purpose of spilling the drink when a person is too greedy.

Pranks and practical jokes are nothing new. People have been setting up their friends for hilarious mishaps for centuries. It's just one of those things that never gets old.

One of the most famous ancient pranks comes courtesy of the ancient Greek philosopher and mathematician, Pythagoras. Better known for his eponymous theorem, Pythagoras was reportedly the mastermind behind the Pythagorean Cup - a tricky little device used to prank people for aeons. Who said mathematicians had no sense of humor?

The cup is based on a genius design, and still tricks people to this very day. Here's the remarkable history and engineering behind one of the world's greatest pranks.

How It Works: Deciphering the Genius in the Design

Within the column is an open chamber. The column also features a small hole that allows the passage of liquid between the cup and the central column. When you fill the cup to just below the tip of the column, you're able to drink without any issues. But, if you fill the cup beyond the column, then you're going to run into some problems.

It's all thanks to Pascal's principle of communicating vessels. When the cup is filled beyond the column, the liquid moves through the small hole, up into the column, and drains out through the stem and the hole in the base. In doing this, a siphon is created, which causes the entire cup to be drained. Therefore, if you try to overfill your glass, you end up losing everything you've just poured.

The History of the Prank: Tracing the Origins of the Pythagorean Cup

Though it's difficult to ascertain who created the cup, popular consensus points to Pythagoras of Samos. 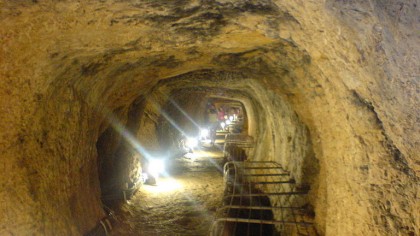 Pythagoras lived between 570 and 495 BCE, and while there's no accurate date on when the cup was created, it's likely it first appeared sometime in the mid-6th Century BCE. According to one legend, Pythagoras created the cup to punish his peers who greedily over-filled their cups of wine. For this reason, the cup is often also referred to as a "Greedy Cup".

Other theories suggest that Pythagoras created the cup to remind people to drink in moderation. If the liquid in the cup sits below a certain level, you can drink quite comfortably from it. But if you pour above that level, it will all drain out. Whether it was intended to punish the greedy, or to serve as a reminder of drinking sensibly, it certainly made an impact. The basic design of the Pythagorean Cup inspired jokers all around the world, and it remains a popular practical joke.

Versions of the Pythagorean cup that date back as far as the 4th Century CE have been found by archaeologists, including Roman variations on the design.

The Roman "Tantalus Bowl" functions in much the same way as a Pythagorean Cup, with the addition of a small figurine of Tantalus - a figure from mythology who was unable to quench his thirst.

In trying to drink from the bowl, the drinker effectively becomes just like Tantalus. Just goes to show that referencing popular stories for comedic effect is nothing new either.

Prank Your Friends: Making Your Own Pythagorean Cup

If you want to enjoy the grand, ancient tradition of making your friends spill their drinks all over themselves, you're in luck. There are a number of ways you can mess around with Pythagorean Cups at home. Obviously, you could easily buy one from an online joke shop, but where's the fun in that? Why not try making a Pythagorean Cup of your own?

There are a couple of options available when making your own cup. If you want to really bring the prank into the 21st Century, you could try 3D-printing the device. Youtuber 3D Printing Nerd shows you how it's done in his informative video. Plus, he even provides a link to the design of the cup in the description box. If you have 3D printing technology at your disposal, it's definitely worth giving this design a try.

If you'd prefer something a bit more old school, you could try sculpting your cup out of clay, just like the ancient Greeks would have done.

There are plenty of video tutorials showing how even beginner sculptors can craft a Pythagorean Cup. You get to show off your arts and crafts skills, and prank your friends. That's a win-win situation!

Last but not least, you can craft a super simple Pythagorean Cup at home using just a plastic cup and a straw. The tutorial below by TheDadLab is so simple that even a child could do it. Though it's not likely to trick anyone since all the mechanisms are clearly visible, it's still an easy and fun experiment for illustrating the science behind the design of the Pythagorean Cup.

Just cut a hole in the bottom of the cup, and push your straw through. Make sure the straw is bent at the top, and that there's a gap between the tip and the base of the straw. Seal the hole where the straw has pierced through, then get pouring!

There's a lot to be learned from the Pythagorean Cup. For starters, it teaches us that people have enjoyed pranking their friends for millennia. It also teaches us that science and engineering can be super fun, and that scientists and engineers have the potential to play some pretty great practical jokes on unsuspecting victims.

Whether you're a dedicated prankster, or even a science teacher looking for a fun experiment to share with your class, the Pythagorean Cup is well worth a try. Why not experiment a little and see what everyday items you can use to create a Pythagorean Cup of your own?

Can you think of any other pranks or practical jokes that use science and engineering in fun, unexpected ways?

7 Technologies That Could Help Solve the Drinking Water Crisis

Love Tiltable Maze Games? Then Build Your Own