The Queensferry Crossing is a 21st-century bridge considered to be the world’s largest free-standing balanced cantilever bridge. It surpassed many engineering challenges as well as achieved innovative structural designs that makes it an engineering icon.

The Firth of Forth at the eastern region of Scotland is one of the country’s most important transport corridor that leads up to the highlands. It’s a key transportation link that highly benefits the Scottish economy and many other logistics for industries. Along the estuary’s path lies the Forth Road Bridge, the Forth Rail Bridge and the all-new Queensferry Crossing (sometimes referred to as the Forth Replacement Crossing). This vista of bridges is truly a magnificent site and one of the unique locations on Earth. When the Forth Road Bridge was constructed in 1964, it became the longest span suspension bridge outside of North America and the fourth largest in the world.

However, an investigation in 2004 indicated that the cables of the Forth Road Bridge were suffering corrosion on an internal level, which ultimately caused an 8-10 percent loss of overall structural strength. As the traffic volume that passes through the Forth Road Bridge continued to exceed its design volume, a number of the minor, corroded cables were beginning to snap. The rate of loss of structural strength was projected to accelerate if the traffic volume on the bridge wasn’t strategically controlled. That’s why in 2006, Transport Scotland launched a decade-long plan to construct a new crossing structure that would alleviate the 53-year-old bridge from the extreme volume of traffic.

How the Queensferry Crossing was constructed

Construction of the new road bridge began in September 2011 and it took 6 years to fully complete the project at an estimated cost of £1.35 billion. Transport Scotland is the owner of the Queensferry Crossing and Ramboll was the leading Design Joint Venture (DJV) firm between a number of engineering and design parties. Some of the firms within this large network of DJV includes Sweco and Leonhardt Andra und Partners. The main contractor of this ambitious and monumental project is the Forth Crossing Bridge Constructors (FCBC), which is a consortium of Hochtief, Dragados, American Bridge, and Morrison Construction. Other civil engineering aspects of the project, such as the geotechnical investigations, were dealt with by engineering giants Arup and Jacobs. Peter Curran, the project director for the Queensferry Crossing Ramboll DJV, expressed how the project brought together various teams to ensure the smooth delivery of the bridge.

"Working on a project of this scale and importance is a real privilege. We have been working on the Queensferry Crossing since 2009 and it has been both a challenging and rewarding experience. We have worked hard in pushing the boundaries of innovation in order to develop a competitive tender design and have subsequently continued our endeavors during the construction process in close collaboration with the Contractors and Clients teams in order to optimise its delivery. It really is awe-inspiring to look out onto the Firth of Forth and see the contribution we have made to such an amazing bridge-scape."

The Queensferry Crossing serves as the focal point of the upgrade scheme within Scotland’s vital cross-Forth transport corridor. The bridge is composed of three slender towers that support the spanning decks. Each of the two main spans stretches for 650 meters whilst the two side spans each have a length of 223 meters. One of the most interesting engineering features of the bridge is the innovative cable design. The cables were specifically arranged in an overlapping manner, which provides robust structural stiffness and strength allowing the decks to be lightweight and the towers to be slender. The balanced proportions allow for visual continuity, and that continuity spans the entire bridge giving the whole thing a very streamlined and graceful appearance.

A bridge construction of this kind faces one significant engineering challenge – the structure’s marine environment. Arup, in a joint venture with Jacobs, handled the geotechnical engineering aspect of the bridge’s construction. The structure spans across a deep marine channel with a wide range of ground conditions. In order for the bridge’s towers to have firm foundations, these ground conditions must be accurately determined. Gathering the geotechnical data and understanding the ground condition risks was the primary challenge the engineers faced. The Forth’s marine environment, which experiences tides and strong currents, proved difficult for the contractors to install circular caissons for the two outside towers. Understanding the soil profile of the Forth greatly helped in positioning the caissons within almost a millimeter of accuracy. The central tower or pylon of the bridge is founded on an existing mid estuary island or Beamer Rock.

The Queensferry Crossing officially opened to traffic on August 30, 2017. According to Transport Scotland, the new bridge will improve travel times and significantly increase the transport corridor’s traffic capacity. Aside from optimizing traffic flow, the Queensferry Crossing is also expected to improve some environmental aspects around the region. “The project set out to dramatically enhance user experience – improving traffic flow, traffic safety, air quality, and accessibility in the region”, noted Jacobs’ website.

The bridge in figures

Just over 23,000 miles (37,000 km) of cables have been used to support the bridge’s decks from the three towers. The cables offer extra structural strength and stiffness, which enable the towers to acquire its slender and elegant design. More than 35,000 tons of steel was put to use – this is equivalent to 80 Boeing 747s. The towers are 200 meters in height and the total deck span, including the approach viaducts, is 2.7 km in length. A total of 180,000 cubic meters of soil were dredged out to obtain marine access channels. Roughly 5,000 cubic meters of dolerite rock had to be drilled and blasted for the construction of the central tower that was founded on the Beamer Rock. 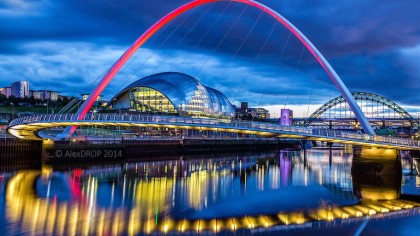 Numerous events will take place during and after the official opening of the Queensferry Crossing. The string of celebratory events will make it known to the world that this technically innovative bridge is arguably an early 21st-century structural icon. This breath-taking bridge is truly a structural legacy for the people of Scotland and for the future engineering generations to come.

A Group of Mechanics Successfully Flipped an Iconic Lada