The Race for Quantum Supremacy: 7 Reasons Why People Are so Excited about Quantum Computers

Quantum computing will impact your life, but not in the ways that you expect.

In the fall of last year, you may have seen a few articles floating around the internet announcing Google has achieved quantum supremacy. Though the term quantum supremacy sounds like the title you receive after going on a ten-person killstreak during a sci-fi multi-player campaign, the idea of Google reaching quantum supremacy is, and was, a massive development in the world of quantum computing.

For the uninitiated, quantum supremacy is a term used in the world of quantum computing describing the moment when a programmable quantum device can solve a problem that no classical computer can feasibly solve.

In Google's case, and described in great detail in their published paper, the search giant announced that its 54-qubit Sycamore processor was able to perform a calculation in 200 seconds that would have taken the world's most powerful supercomputer over 10,000 years to solve. Now, Google's quantum supremacy moment was met with some scrutiny and challenges from competitors like IBM. Yet, the overall research community welcomed the historic moment for the realm of quantum computing. Nevertheless, you are probably wondering why there is so much hype surrounding quantum computing, and if it will directly impact your life.

Well, today you are in luck. We are going to highlight some of the biggest reasons why people are so excited by quantum computing and how this emerging technology will go on to shape your life very shortly. But we are getting ahead of ourselves. Before we jump into how quantum computing will impact the world, let's give you a quick quantum computing introduction. 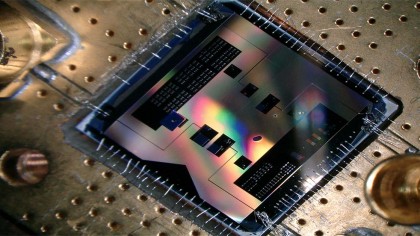 Quantum computing really began to garner interest in 1994, when the mathematician Peter Shor developed a quantum algorithm that could find the prime factors of large numbers efficiently, meaning these algorithms could solve the problems in a time of practical relevance, something that is beyond the capability of "state-of-the-art classical algorithms."

How is this possible? Both quantum computers and classical computers try to solve problems; however, the means at which they manipulate data to get answers are fundamentally very different.

1. Quantum computing is based on "spooky" science

As you probably guessed, quantum computing looks to the quantum world to function, driven by two principles of quantum mechanics superposition and entanglement. Superposition can be a little counterintuitive but bear with us.

In short, superposition refers to the quantum phenomenon where a quantum system can exist in multiple states or places at the same time. In other words, something can be "here" and "there," or "up" and "down" at the same time. Think of it as having a computer system that can be both 1 and 0 at the same time. This principle lays the framework for a quantum computer's basic component of information, a qubit.

Qubits play a similar role to bits in a computer. As described in the Frontiers of Engineering: Reports on Leading-Edge Engineering from the 2018 Symposium, "In classical computing, bits are transistors that can be off or on, corresponding to the states 0 and 1. In qubits such as electrons, 0 and 1 simply correspond to states like the lower and upper energy levels discussed above."

"Qubits are distinguished from classical bits, which must always be in the 0 or 1 state, by their ability to be in superpositions with varying probabilities that can be manipulated by quantum operations during computations."

In short, quantum computers perform calculations based on the probability object's state before it is measured, allowing them to have the potential to process exponentially more data compared to classical computers. This is what makes quantum computing special. Due to the superposition principle, we are able to solve multiple problems in different ways.

2. Quantum computers can "hold uncertainty" in their head

Quantum computers will be used to tackle some of the most significant issues in the world, ranging from artificial intelligence to healthcare. Are you excited yet?

3. Quantum computing will help us usher in the age of artificial intelligence

As you are probably already aware, artificial intelligence will change just about every facet of society. In fact, you have already seen the impact of AI in our smart homes, in healthcare, and in transportation. Nevertheless, we are still a far cry from the world of general AI, AI that can think and act like humans.

Quantum computing will offer the developing world of artificial intelligence more computing power, which in turn will lead to more robust AI systems that can better understand us, "think for themselves," offer more efficient machine learning and better solve small and large problems. Quantum computing may be the push that we need to get beyond narrow AI.

4. We will have better cybersecurity

The basis of online security is dependent on the factoring of large numbers into primes. As we mentioned above, quantum computers are excellent at this. However, the eventual widespread adoption of quantum computers will ultimately make our encryption methods obsolete.

Quantum computers could become a severe threat in the wrong hands. Nevertheless, the good news is that emerging technology is also being used to develop new encryption methods and to create ultra-secure communication thanks to the properties of quantum mechanics that drive the computers.

Will you get your hands on a quantum device? Or some new Apple Quantum computer? Most likely not. Quantum computing will be used by tech companies, organizations, R&D, financial institutions, etc. Even more so, there are companies right now that are using quantum computers.

Google is currently using them to improve the software found in autonomous vehicles and to better model chemical reactions. However, if you are interested in playing around with a quantum computer, you can access IBM's quantum computer via its website and play a few card games with it if you like.

6. Weather forecasts will be much more accurate

Weather forecasting is very accurate but still has its flaws. Accurately predicting the weather goes far beyond just having to bring an umbrella for the day. Weather can directly impact the growth and functionality of an economy.

According to Chief Economist Rodney F. Weiher, nearly 30% of the US GDP ($6 trillion) is directly or indirectly affected by weather, impacting food production, transportation, and retail trade, among others. Quantum computing will usher in a new age in weather forecasting and predicting natural disasters.

As mentioned above, one of the most significant appeals of quantum computing is its ability to analyze countless situations at the same time to provide a solution. Active drug research requires chemists to evaluate the interactions between molecules, proteins, and chemicals to see if medicines will improve certain conditions or cure diseases.

However, as you can imagine, there is a tremendous amount of combinations that need to be analyzed. Quantum computing could cut this curve in half, helping chemists discover viable drug options quicker. Even more so, quantum computing could help cut down on the time needed for the development of personalized drug treatments.

There are a lot of reasons why people should be excited about quantum computing. However, do not expect to see the technology hanging around your household. The effects of quantum computing will be felt by improving the quality of life for people around the world through the creation of better technologies. Should you be excited? Of course. As stated by Nella Ludlow, "Quantum computing promises to be a disruptive technology with such dramatic speed improvements that real tractable solutions to hard problems could be solved in hours and days."

"These same problems would take hundreds of years to solve on our best supercomputers, known as a classical computer, by brute-forcing their way searching through all possible solutions."