The Reason Behind the Purple Skies That Appeared After Hurricane Michael

Purple skies can be witnessed in the hours that follow a hurricane thanks to an equally powerful scientific phenomenon.

The United States, over the course of the past year, has been beset with what seems like one hurricane after the other, with powerful storms carving a destructive path through areas that stretch from Florida all the way up to North Carolina. But despite these occurrences, a silver lining on the cloud remains--or in this case, a purple one.

There is a phenomenon of purple-tinged skies appearing after a hurricane, and in the case of the recent Hurricane Michael, colors as diverse as violet and lilac appeared above during the time that the sun sets. Florida residences tweeted out many images of the beautiful and haunting skies.

The Science Behind the Purple Skies

A phenomenon called scattering, which also explains why certain colors dominate during sunrise and sunset, offers a theory behind the purple skies seen this week. Scattering is the process by which tiny particles and molecules act in changing the direction in which light rays travel.

As Steven Ackerman, professor of meteorology at the University of Wisconsin Madison explains, the colors we see also depends on our perception abilities: “Because the sun is low on the horizon, sunlight passes through more air at sunset and sunrise than during the day, when the sun is higher in the sky. More atmosphere means more molecules to scatter the violet and blue light away from your eyes. If the path is long enough, all of the blue and violet light scatters out of your line of sight. The other colors continue on their way to your eyes. This is why sunsets are often yellow, orange, and red.”

"As sunlight shines down to Earth, most of the colors of the spectrum are able to reach the surface uninterrupted," Florida-based First Coast News meteorologist Lauren Rautenkranz shares in a video that offers a theory. "But the shorter wavelengths, blue and violet, are scattered in every direction. This light bounces from particle to particle until it eventually reaches your eyes. But the sky doesn't appear violet and blue because of our eyes' limitations." 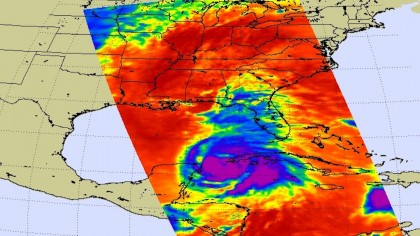 Combined, these theories indicate that the strength of the hurricane disrupts the normal rhythm of wavelengths and essentially brings into greater focus colors and hues which are already right in front of our eyes.

"The light was scattered around the moisture in the air, causing the magical purple color," Rautenkranz adds.

For all we know, the singer Prince could have been inspired to compose the rock ballad "Purple Rain" after a moving experience with a hurricane from the 1980s. Although the range of reactions to the light phenomenon remain as diverse as the spectrum of hues which appeared in the sky, at least there is a solid theory that sheds light on the cause behind their appearance. One could also interpret the purple skies as an official announcement of the passing of a mighty and powerful storm.

The Surprising Reasons Why Tires Are Black