An overview of the revolutionary work of Johannes Kepler that paved the way for the Scientific Revolution.

The nightly spectacle of a pale blue sky fading out to reveal a hidden panorama of stars has captivated the gaze of old and young alike for as long as humans have walked the earth. For just as long, the brightest minds of the time have sought to study the stars, the moon, and the sun. Some of the oldest archaeological sites of our predecessors were intricately connected to charting the movement of celestial bodies, making astronomy the oldest of the natural sciences. 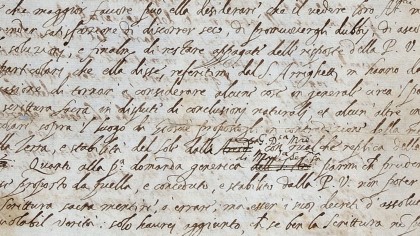 Our ancestors were no less intelligent than we are today and few figures in astronomy stand as prominently as Johannes Kepler, who worked out the laws that governed the motion of the planets around the sun without so much as a telescope to aid him. To commemorate his death, we’re revisiting his singular contribution to the science that governs the heavens: Kepler’s Three Laws of Planetary Motion.

With nothing more than the data collected by his remarkably colorful—and remarkably brilliant—mentor, Tycho Brahe, Kepler discovered the math that explained the peculiar movement of the planets in the night sky, and by doing so, the precise nature of their orbits around the sun. It had long been observed that some planets would appear to move backward in the sky at certain times, performing a kind of backtracking rather than a straight and steady transit.

Astronomers working with the old geocentric model of the solar system had to devise increasingly complicated explanations for this behavior, which they called epicycles—or circles within circles. Kepler would go on to show that this wasn’t due to the planets having second or third orbits, but by having elliptical orbits and traveling at variable speeds as they orbit the sun.

Plotting Earth’s Orbit From The Backyard

Okay, maybe not the backyard precisely, but near enough. Kepler discovered the Laws of Planetary Motion without the aid of the telescope, working entirely from the astrological records of Brahe, publishing the first two laws in 1609, less than a year after the first known telescope was produced in Europe. He was able to do this with nothing more than the same trigonometry most of us learned in high school.

Using the Sun as one point in the triangle, Earth as the second, and Mars—the Martian year was known at the time—as the third, Kepler was able to calculate the true orbit of the Earth around the sun as well as other information about its movement by calculating the angle between the Sun and Mars relative to Earth at regular intervals. From this surprisingly simple, if painstaking, work, Kepler was able to uncover the math that to this day can be used to determine the movement of all sorts of celestial bodies in the Universe with remarkable accuracy.

The first of Kepler’s Laws of Planetary Motion states that all planets move in elliptical orbits, with the sun at one of the two focus points of the ellipse. With this Law, Kepler introduced many of the rudimentary concepts of modern astronomy, such as the perihelion and aphelion of a planet’s orbit, and not only was Kepler the first to discover the true nature of planetary orbits, he was able to derive the math that governed them.

This discovery wasn’t the first to posit that the Earth revolved around the Sun. That theory was proposed by Copernicus decades earlier, but Kepler’s First Law established this fact with data that proved this unequivocally. What’s more, Kepler’s First Law doesn’t just describe the orbit of the planets around the sun, but of any celestial bodies orbiting another.

The long, narrow orbits of many comets around the sun can be accurately described using this law, as can interstellar objects caught in the gravity well of a star but which do not “close” the ellipse and instead form an open hyperbola and fly off and out of the star's gravitational pull. Kepler’s First Law can even accurately describe the orbits of stars around the black hole at the core of our galaxy.

It goes without saying that this was a radical idea for the existing powers at the time. The hierarchy of the Catholic Church fought hard to suppress such ideas as they contradicted the text of the Bible, thereby threatening their claim as the central source of truth about the Universe, but Kepler’s discoveries spoke for themselves and their truth was apparent to anyone who had the education and training to understand them. After Kepler, the geocentric model of the solar system was finished.

Kepler’s Second Law of Planetary Motion states that the imaginary line with the sun at one end and the earth at the other will sweep over equal areas in equal time. What this means is that as the Earth approached the perihelion of its orbit around the Sun, it sped up, and as it approached the aphelion of its orbit, it slowed down—all in a regular, predictable way. This and Kepler’s Third Law together put an end to the need for epicycles to understand the “irregular” movement of planets. What’s more, Kepler’s Second Law was to lay the groundwork for much of the Newton’s Laws of Motion and Law of Universal Gravitation.

This is especially helpful when studying Exoplanets, since it is easy to calculate a planet’s period, but impossible to tell how close it is to its star since we can only see an exoplanet when it passes in front of the parent star. This ratio of period to mean distance is also essential to calculating the trajectories of satellites and spacecraft when traveling to other planets, making interplanetary exploration possible.

Kepler’s Impact on the Scientific Revolution

Without question, Kepler’s Laws of Planetary Motion provided a launching off point for the work of Isaac Newton, the brightest light of Europe’s Scientific Revolution in the 17th century. It was Newton’s effort to discover why Kepler’s Laws were correct—discovering the why to Kepler’s how—that he was able to invent Physics as we know it: the Law of Universal Gravitation, the Laws of Motion that governed everything from the movement of planets to a stone thrown into the air, as well as the Calculus needed to describe his findings.

This revolutionary work would prove the foundation of countless discoveries in the sciences and furthered the knowledge of humankind in ways even Newton could not have envisioned. At the heart of it all, though, was Kepler and his reams of recorded observations, blazing the improbable trail for all that was to come.