Since its publication in 1859, the Riemann hypothesis has become one of the holy grail of mathematics.

The Riemann Hypothesis is one of the most important mathematical advancements in history. Devised in by Georg Friedrich Bernhard Riemann in 1859 it has yet to be rivaled in its impact, or solved, for almost 160 years.

That is, until now - if a current claim of its proof is true.

But what is it? Why is it important? Let's take a quick look at this keystone of modern prime number theorem.

What is the Riemann Hypothesis?

The Riemann Hypothesis was a groundbreaking piece of mathematical conjecture published in a famous paper Ueber die Anzahl der Primzahlen unter einer gegebenen Grösse (“On prime numbers less than a given magnitude") in 1859 by Bernhard Riemann.

It centers around one of the most fascinating phenomena of maths - prime numbers. Mathematicians have been on a quest to predict them since the discipline's very beginnings.

Maths 'giants' like Euclid, Euler's product formula (connecting prime numbers to the zeta function), Gauss (Riemann was a student of Gauss) and Legendre (formulation of the prime number theorem) to Hadamard and de la Vallée Poussin have all made huge contributions to the field over the centuries.

Prime numbers tend to not follow any discernable pattern. By finding one you cannot predict the next one without studying other numbers as you move forward - far from an efficient process.

Some had postulated that instead of looking forward, it might be useful to look backward instead. Could it be possible to understand the spacing of prime numbers by seeing how many there are smaller than the current one?

This is exactly what Riemann attempted to achieve. This insight would result in Riemann making one of the biggest leaps in our understanding of prime number theory since antiquity. Not just that but for almost 160 years it is a feat yet to be matched or exceeded.

The Riemann hypothesis centers around the zeta function equation

As the Clay Mathematics Institute explains:

“[Riemann] observed that the frequency of prime numbers is very closely related to the behavior of an elaborate function:-

[This is] called the Riemann Zeta function. The Riemann hypothesis asserts that all interesting solutions of the equation:-

In overly simplified terms it relates to the distribution of prime numbers, but that doesn't really begin to explain it. A more in-depth explanation (which is needed) of this is out of the scope of this article but Jørgen Veisdal (a Ph.D. fellow at the Norwegian University of Science and Technology) has made a very informative overview.

His work now forms the main focus of prime number theory and was the main reason for the proof of prime number theorem in 1896. Since then several new proofs have been found, including elementary proofs by Selberg and Erdós. Riemann’s hypothesis about the roots of the zeta function, however, remains a mystery.

Although very complex in nature, what it is trying to solve is pretty simple. Instead of trying to determine where prime numbers were, Riemann attempted to investigate the very nature of them.

He was not the first to take this approach, in fact, it was the 'fashion' of his peers during the 1800's but he was to become a master of it.

Why is the Riemann Hypothesis important?

In short, it's sort of a 'holy grail' of mathematics. "Most mathematicians would trade their soul with Mephistopheles for a proof," said Marcus du Sautoy of Oxford University.

To date, mathematicians have a pretty good idea, approximations, for the density of primes but not to an absolute certainty. These approximations are just that and no function (yet known) exists that allows them to efficiently and perfectly compute the number of primes less than a given integer (which tend to be numbers with millions of zeros).

Given that mathematicians are unable to determine exact values, they want to know how good their approximations are. This is the problem Reimann was trying to address with his 1859 paper.

If his hypothesis is true it would guarantee a far greater bound on the difference between existing approximations and the 'real' value. It would, in other words, tell us if prime numbers are as chaotic as they seem today.

Although his hypothesis does tackle hundreds of other concepts, its core is concerned with the distribution of prime numbers.

To some this might seem like a "lot of fuss about nothing" but when you realize that many large organizations, like the NSA, recruit many number theorists to conduct research in this field something is definitely important about it.

Prime number theorem was once purely theoretical but has started to find real-world applications in our modern digital world. cell-phones, for example, would not be able to work without spread spectrum communications and "quadratic residue sequences".

Both these rely heavily on some properties of prime numbers to allow multiple signals to work on the same frequency band.

But more importantly, prime number factorization is a commonly employed practice used in encryption techniques like public-key encryption systems. These tend to use large semi-primes (multiplying two prime numbers) to secure the encryption.

In order to break it, you would have to find the prime factorization of the large semi-prime number – that is, two or more prime numbers that multiplied together result in the original number.

When this technique employs small prime numbers it's relatively simple to crack but using larger ones can take even computers days, months even years to solve. Given the non-linear distribution of prime numbers, the process is a trial and error process - you'll need to try all the possible combinations.

In short, solving it would, amongst other things, have enormous implications for cyber-security.

The Riemann hypothesis is one of the Millennium Prize Problems

There are some problems that have remained stubbornly beyond the abilities of our greatest minds. Some of these, at least in the field of mathematics, is called the Millenium Prize Problems.

These consist of a seven (now six) or so mathematical problems that were identified by the Clay Mathematics Institute at the turn of the new millennium.

To date, they comprise of the following:-

1. Yang-Mills and Mass Gap - According to quantum solutions of Yang-Mills equations there appears to be a "mass gap".

3. P versus NP Problem - This is typified by the Hamilton Path Problem. "Given N cities to visit, how can one do this without visiting a city twice? If you give me a solution, I can easily check that it is correct. But I cannot so easily find a solution."

4. Navier–Stokes Equation - The equation that governs the flow of fluids. "However, there is no proof for the most basic questions one can ask: do solutions exist, and are they unique?" It has been claimed, though not officially recognized by the Clay Mathematical Institute, that this has been solved by Mukhtarbay Otelbayev.

5. Hodge Conjecture - "The answer to this conjecture determines how much of the topology of the solution set of a system of algebraic equations can be defined in terms of further algebraic equations." This problem asks whether complex mathematical shapes can be built from simple ones.

6. Poincaré Conjecture- French mathematician Henri Poincare asked, in 1904, if the three-dimensional sphere is characterized as "the unique simply connected three manifold." It is a special case of Thurston's geometrization conjecture.

7. Birch and Swinnerton-Dyer Conjecture - "Supported by much experimental evidence, this conjecture relates the number of points on an elliptic curve mod p to the rank of the group of rational point". This is also as one of the most challenging mathematical problems still to be solved.

How many Millennium Problems have been solved?

These problems each carry an eye-watering $1 million cash prize but the real award is the ever-lasting fame and respect from peers to come along with solving them.

Perelman has built a career out of solving mathematical problems and has made significant contributions to Riemannian geometry and geometric topology. In 2006 he was honored in the December 22nd edition of Nature for his solution to the Poincare's conjecture marking it as the scientific "Breakthrough of the Year".

When it was officially announced he met the criteria for the Clay Millenium Prize in 2010 he rejected the prize money stating that his contributions were no greater than those of Richard S. Hamilton. 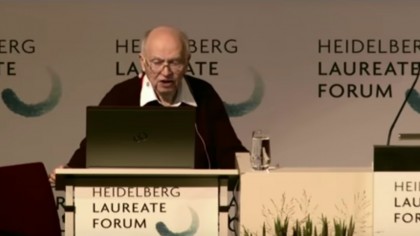 But the Riemann hypothesis might be the next one to fall if the recent news turns out to be correct. It seems a 90-year-old retired mathematician may have a solution that has plagued his peers for almost 160 years.

Of course, his claim will need to be verified by the Clay Mathematical Institute first, but it could mean the Riemann hypothesis has finally been solved.

But he is not the first to claim to have solved the Reimann hypothesis. In 2004, Louis de Branges, a French-born mathematician, now at Purdue University in the US, claimed a proof of the Riemann hypothesis.

Branges' solution was, however, later dismissed by his peers.

A 12-Year-Old Artist Has Made $1.6 Million With Her NFT Collection