There is no doubt the rise of AI will affect the employment sector. We take a look at which jobs are the most vulnerable, which are the most resistant and which engineering jobs may even thrive.

Every year, the workplace that futurists have long envisioned—one dominated by artificially intelligent machines doing everything from answering the phones to balancing a company’s books—inches ever closer to reality. 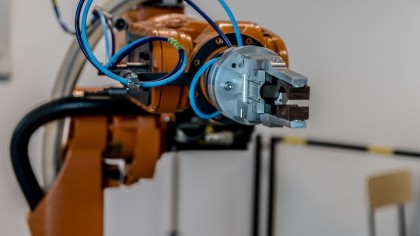 How Artificial Intelligence Has Impacted Engineering

Naturally, we humans are feeling more and more pinched by the rise of AI--a new workforce that doesn’t need to sleep, eat, take breaks, socialize, or even receive a paycheck.

For many, such a future is a source of genuine anxiety and those starting out in their careers might be forgiven for wondering which jobs are safe from automation.

Jobs Most Susceptible To Automation

By 2030, it's estimated that as many as 46% of current manufacturing jobs will be taken over by AI and automation.

According to the World Economic Forum's The Future Of Jobs Report, within the next five years alone, a majority of companies expect to scale back their full-time workforce to make room for automation. The chief economist for the Bank of England predicted that there might be as many as 80 million jobs automated in the US alone. With fully half of all workplace tasks being performed via automation within the next decade, some jobs are more susceptible to this shift than others.

This is probably the most obvious as it’s the one almost everyone has encountered: the self-checkout aisle at the grocery store. Whether you love them or hate them, they are the future of retail, set to eliminate the jobs of millions of workers in the process.

Much of the work performed by office administrators is processing data from various sources. Whether it is resumes, payroll or direct deposit forms, or scheduling employee vacation picks, artificial intelligence systems are perfectly suited for precisely this kind of work. Much like dedicated tax preparers are being replaced by artificial intelligences and software, many workers in a back-office can expect a computer program to be able to do their job in the next couple of decades.

One of the most revolutionary changes we will see in the coming decade is the shift to automated material transport via self-driving vehicles. One of the most widespread jobs that will become automated in the next two decades, self-driving trucks will threaten the jobs of tens of millions of drivers worldwide. When you consider that unlike a long-haul trucker, a self-driving truck does not need to sleep, and its driving ability does not become more impaired the longer it drives, the potential cost savings are huge and the safety benefits on the road are substantial.

There is a common feature shared by the jobs most likely to be automated: they perform A-to-B functional tasks. Given a specific input, they will produce a specific output. Entering payables into a system can be predicted and automated, as can employee scheduling or ringing up items in a store.

Even driving a trailer across the country is just a long decision tree based on a map given to the automated vehicle ahead of time. This is the strength of artificial intelligence and automation in general. It eliminates the need for human beings to perform routine, predictable tasks. This also gives us a very big signal as to which jobs are most resistant to automation going forward.

One of the greatest minds of Computer Science, Alan Turing, identified the key test of a true artificial intelligence equal to that of a human: can a person tell that they are talking to a computer? The eponymous Turing Test underlines one of the major shortcomings of an artificial intelligence, namely that it isn’t a human being.

Humans have sophisticated social conditioning built into our DNA through millions of years of evolution, something known as social intelligence. Some people are naturally better equipped than others. Being able to tell the difference between a smile and a sneer was often the difference between life and death for our ancestors and being able to navigate potentially volatile social interactions is a skill that is horrendously difficult for a machine.

Hundreds of professions depend on having well-developed social intelligence. Everything from teaching to sales to medicine requires high-level social interactions that can be challenging even for the human professionals engaging in them; machines simply don’t stand a chance, which means these are jobs that AI can't replace--at least not for a very long time.

Machine Learning is one of the fastest growing fields of artificial intelligence research. Training a machine to recognize a cat or a dog in a picture requires tens and often hundreds of thousands of samples of what a cat or a dog look like.

Even then, the most sophisticated AIs still mistake a dog-shaped tree for a dog or completely miss the cat in a picture that you and I would see immediately. How then do you tell it to build a dam at a specific site or a bridge that can withstand 100 mph winds?

What a machine does better than a human is calculate figures at an astonishing rate. It can give you the answer to a problem it already knows how to solve but getting a computer to solve a problem it has not seen before is exceptionally difficult.

While advances are being made in this area, the best a computer can do for the foreseeable future is assist scientists and engineers in their work. It will be a very long time until computers can do such work themselves, so those pursuing engineering degrees, or those already in an engineering profession, can breathe easier.

Computers have been used to make art ever since there have been computers and by now everyone has seen the hilarious and trippy images put out by Google’s Deep Dream AI. A Google artificial intelligence has even been able to compose original music that doesn’t sound all that bad. But can it invent punk rock or jazz on its own? Of all the possible careers, creative and artistic jobs are most likely the kind of jobs that can't be replaced by technology.

An artificial intelligence can invent unique, original patterns or styles that haven’t been done before, but could it create anything that extends beyond an interesting anomaly and become something artistic in its own right? Would humans ever accept it as such? Many people struggle with e-readers because they prefer holding an actual book. How much harder will it be for people to read a competently written novel produced entirely by a machine?

So long as human beings consume art in its various forms, nothing a machine has produced to date has really come close to the sustained efforts of genuine artists and it will be a long time, if ever, a machine overtakes humanity when it comes to creative works.

Which Engineering Jobs Are Safe From Automation?

If you’re looking at the above list, you might have already seen why some of the most common engineering jobs are jobs that can't be automated.

Quite simply, there is no artificial intelligence without engineers building the systems to run them. The more demand there is for artificially intelligent systems, the more in-demand the engineers who build those systems will be. Someday, the software might learn to write itself but for the foreseeable future, the hardware must be designed and built by human engineers.

The essential job of the mechanical engineer is to build a machine to perform a task. An AI can give you a complete set of gears to produce a desired amount of torque, but telling a machine to build you a fully functioning car is beyond even the most powerful computer’s capabilities. A computer can provide invaluable assistance in the process, but you will still need a team of mechanical engineers at the helm to design and build any sophisticated machine.

Without a doubt, a computer could probably come up with some interesting ideas for furniture or maybe even a building, but for serious work, an architect who has a trained eye for aesthetics and environment is needed. Any machine could design a carbon-copy office park but walk past the Empire State Building in New York or the Hagia Sophia in Istanbul and the importance of the architect won’t need to be mentioned. The work of the architect speaks for itself.

The Rise Of AI Is Coming-- And That's Okay

With the increased use of artificial intelligence in all facets of life, the future can feel bewildering. With a proper understanding of where we’re heading, anyone who feels threatened by the coming change can adequately prepare themselves to make the necessary jump to a more secure position when the time comes and those already primed to take advantage of the growth of artificial intelligence can take full advantage of it once it arrives—and it will arrive, that much is certain.