A few years ago, Apple has teamed up with one of the most acclaimed architecture firms in the world to design a global series of Apple stores. And this 2017, the latest Apple Store to emerge from the shopping district of Chicago in the US features a carbon-fiber roof embellished with an Apple logo. Yes, the roof will essentially resemble a MacBook.

Plans and architectural perspectives of the new Apple Store at the North Michigan Avenue shopping district were filed by the Zeller Realty Group. The real property group wanted a 20,000-square-foot glass, steel, and wood building to occupy this space in the shopping district. The project was originally priced at $62 million but was later declared to be trimmed off to $26.9 million.

James McGrath, a partner at Foster+Partners architecture firm who designed the Chicago Apple Store, has this to say about the newest landmark of the city.

"We wanted the building to be as light and transparent as possible. We want it to be more than just a shopping experience".

An Apple logo was briefly attached to the roof of the building for about an hour and was peeled off by the crew for removal. The logo will be stuck back on top of the thin, carbon-fiber roof near the completion of the building to resemble a MacBook laptop. 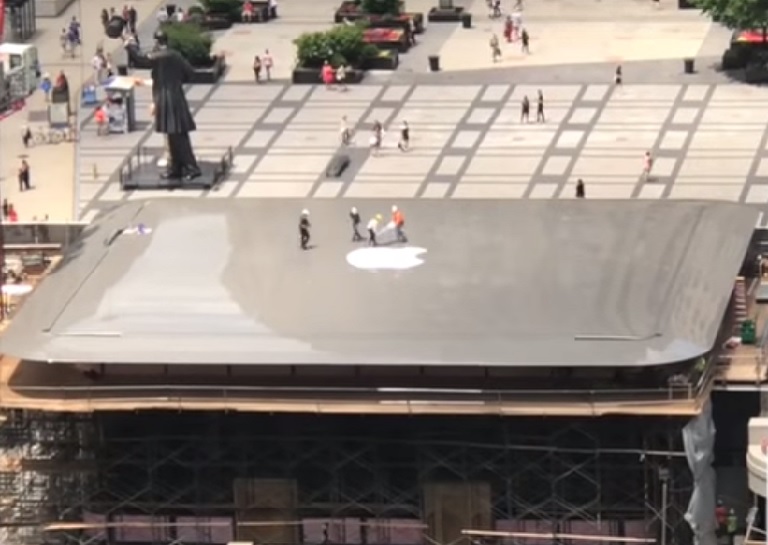 Designing the Apple's store roof as a MacBook doesn't really come as a surprise. For those who are a fan of the prominent architecture firm Foster+Partners, like us here in Interesting Engineering, you would be aware that this architecture stunt has been subtly pulled off before. Just take a look at the Apple Store that was designed by the architecture firm in Istanbul's Zorlu Center. 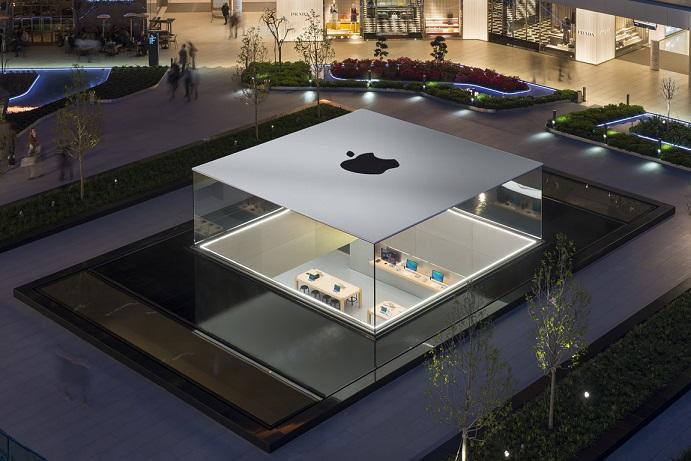 It's just as reminiscent of a MacBook as the roof design of the Apple Store in Chicago. This contemporary Apple Store was the first project completed by the architectural practice in Turkey. Moreover, it's also the first building completed in a series of new Apple stores around the world to be jointly designed by Apple and Foster+Partners.

There are two more recently completed Apple stores in Westlake, China and Union Square in San Francisco. All of these buildings follow a set of similar architectural principles. They are designed with ample space and glass cladding revealing the minimal interior style of the store. Consequently, it echoes the iconic minimal aesthetic design of Apple products. 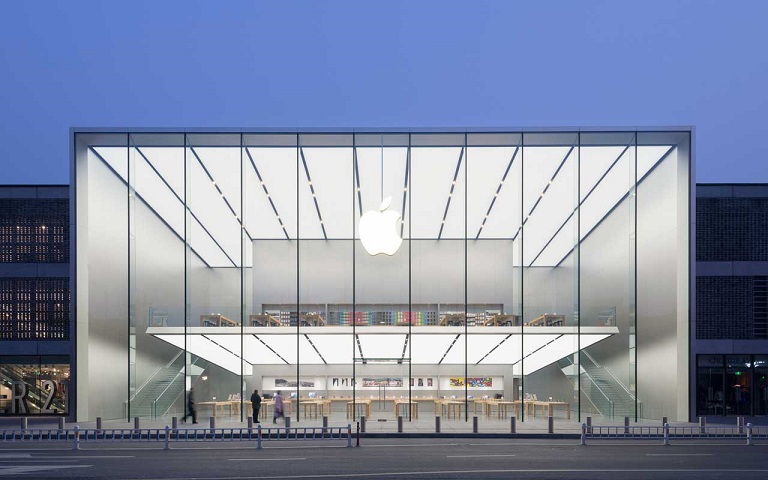 Chicago's newest Apple Store will embody many new design elements that were introduced at the San Francisco store that opened last year. One of these particular elements is called "The Forum". According to Foster+Partners, it is a "new learning environment, where specialists from various fields come to entertain, inspire and teach, will occupy a prime central position on the mezzanine against a vast video wall which will also act as an animated backdrop".

There is no news of when construction of the Apple store in Chicago will be completed and when it will open up to the public, but some sources say that it may be targeted for October. When completed, the Chicago branch will be the fourth store to be designed by Apple and Foster+Partners in their global Apple Store projects.